Upstate New York has the misfortune of being in a state where one city dominates everything, saddling everyone else with the heavy burden of New York City.

Upstate New York is going nowhere. It is at the mercy of a state government focused culturally, economically and politically on New York City. The City is the economic engine of the state but it operates in a walled off engine room with few, if any, connections to Upstate New York. Oh, yes, there are the visitors from the City who throw out a few dimes for those who supplies their lattes when the patronize the local coffee shop, but with those dimes come with billions of dollars in added taxes to support a bloated state government no one but New York City wants or needs.

The City folks, of course, argue Upstate gets subsidized, but that’s irrelevant when state mandates are imposing local share costs Upstate New York can’t begin to afford. New York City is a net burden and a very heavy one on Upstate. We get some hints as to just how heavy that burden really is, and how disastrous the fracking ban and current attempt to stop all pipeline development in Upstate New York is, from a Federal Reserve Bank analysis.

The analysis comes in the form of a webcam presentation made this past week by the Federal Reserve Bank of New York and reported on by Binghamton PressConnects here. The story does its best to put a positive spin on what is pitiful by any objective measure. It incorporates observations from this story out of the Federal Reserve about the labor market in the area covered by the Bank, which includes not only New York State, but also Northern New Jersey, Puerto Rico and the U.S. Virgin Islands, although you wouldn’t know it from the PressConnects article, which appropriately focused on the Southern Tier.

Unfortunately, most of the points made in the article missed the big point because the Southern Tier was analyzed in the context of a larger region where it’s the “back forty” at best and skid row in many cases. Here are some of the key quotes from the story:

“even though the labor market in the region is exceedingly tight, job growth has been held in check because the region has been losing workers for more than 20 years, and an aging population has been thinning the ranks of available employees”

“regions such as the Southern Tier… have found it difficult transitioning its workforce from legacy skills to the talents necessary to find employment in the modern economy, leaving some workers unemployed even in the face of a worker shortage”

“to remedy the skills gap, [the Bank] suggested a heavy investment in worker retraining programs to address the employer needs”

“a critical worker shortage is no revelation to local economic developers, who are attempting to lure back the hordes of former residents who relocated to other parts of the nation during in the 2008 recession”

“the region has lost population every year since 1999”

“the weak labor supply conditions are a result of the converging effects of population losses including out-migration, an aging and shrinking labor force, and lessened demand for workers over time”

“the population base must grow, and the area must offer a quality of life that is attractive to those seeking employment and careers”

“a multi-pronged approach should be taken to address issues such as housing and revitalization of the urban cores; while simultaneously a county-wide promotion program needs to be executed that promotes the area as a desirable place to live and work”

Reading this list, it is impossible not to want shriek “It’s the taxes, stupid!” This would be quickly followed by a “What were you thinking when you let Cuomo get away with a fracking ban?” Neither of these points were made, though. That wouldn’t be politically correct. Instead, everyone labors on in self-deception pretending the problem is somehow untrained workers who’ve already left the area.

It makes no more sense than the standard recommended remedy offered by bureaucrats; hiring more bureaucrats to do workforce training. I’ve been hearing this nonsense for 40 years and I’ve never seen anyone getting a job from these programs other than those who run them.

Meanwhile, the real problem: a lack of commitment to growth and a failure to accommodate natural gas development go unmentioned. It’s as if the reason for the outmigration didn’t bear investigation and there were no costs to Cuomo’s corrupt surrender to the NRDC gang on fracking. But, those costs were enormous as we see from the actual presentation made during the webcam, which is available here. Take, for example, this chart depicting labor market trends: 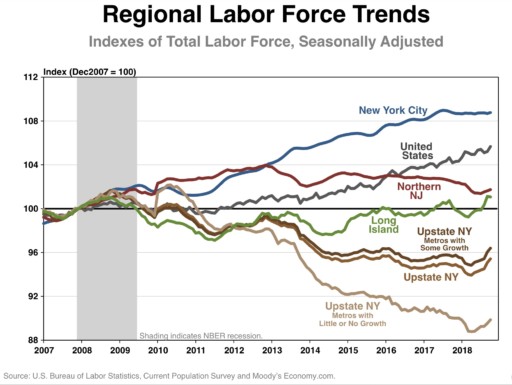 Notice how New York City is booming, while Upstate New York is dying. High taxes are just the incidental cost of living if you’re a Manhattanite doing green energy hedge fund business, but if you live in Upstate New York, those same state taxes are confiscatory. They’re killing Upstate, in fact, and the state mandates are doubling down on the hurt of dying.

It isn’t the labor force or its skills that are the problem; it’s the outflow of workers who can’t pay these taxes and the lack of job opportunities for blue collar workers. Workforce development fans suppose it’s all a matter of training non-existent workers for white-collar jobs when it’s really one of attracting blue collar jobs such as those natural gas development would have delivered.

And, when you look at the following chart it all becomes clear: 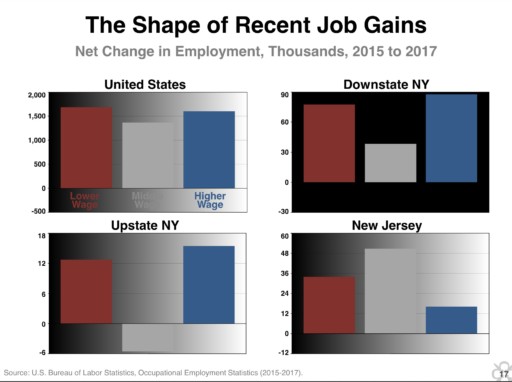 Upstate New York lost middle wage jobs; exactly the jobs natural gas development might have delivered. The center of Upstate New York is being hollowed out by policies focused on New York City, where high-end jobs and political correctness go together like expensive whiskey and dry vermouth.

The Southern Tier, unsurprisingly, is the worst spot to be Upstate. Just look at Binghamton: 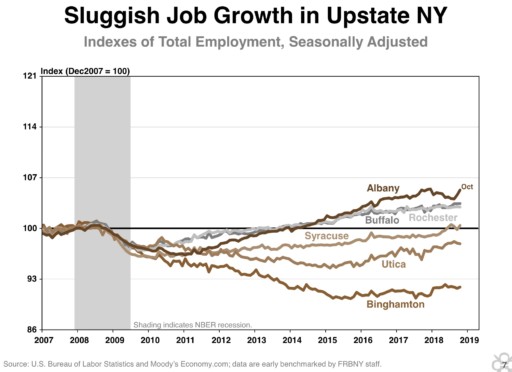 Albany, of course, did better; yet another case of bureaucrats being insulated from the policies they have imposed on places such as Southern Tier.

This is the real deal when it comes to Upstate New York. It is dying from high taxes and the green energy ideology of downstaters. This is just fine with the NRDC gang and fellow travelers far removed from the necessity of earning a living in the Southern Tier. They’d just as soon convert it all to a wilderness and they’re well on their way.