The future belongs to unstoppable natural gas, as far as the eye can see. Yes, renewables will be part of it, too, but fracking is the primary path to power.

Thursday and Friday’s Today In Energy posts from the Energy Information Administration (EIA) together provide a big picture of our energy future. It is one of unstoppable natural gas. Fracking is here to stay. The first post, by Richard Bowers, is about how natural gas has displaced coal in the Northeast with respect to electricity generation. The second, by the EIA staff, is all about the expected decline in nuclear energy capacity and generation. Put them together and all you see is unstoppable natural gas.

Three charts from the two posts tell the bigger story. First, there is this one depicting the trend in Northeast electricity generation:

Notice how coal has shrunk, natural gas has boomed and everything else is pretty much the same. Renewables have grown but are such a small part of the mix as to be largely irrelevant. Rooftop solar and energy efficiency improvements have also contributed by depressing demand for electricity to be brought to homes and industry, but the large subsidies needed to do both limit their potential to do much more than that. The one inescapable fact discernible from this chart is this; natural gas has won the day.

The second chart tells us where the action has been and it’s all Pennsylvania, which has added a huge amount of natural gas generation as well as nuclear power and renewable energy. It’s interesting, in fact, that the Keystone State has added as much renewable energy as the Empire State. Moreover, it done so without the graft and right along side natural gas.

Notice, too, how much growth in natural gas usage there has been in New Jersey and New York. This has happened while the Sierra Club of New Jersey and the NRDC gang have been protesting there’s no need for more natural gas for either state and opposing ever project to get it there.

Meanwhile, even as Governor Corruptocrat advances schemes to subsidize nuclear power  plants in Upstate New York so he can close one next to his Westchester home and appease the NRDC gang with fracking and pipeline turndowns, it is losing to natural gas in the same manner as coal. It can’t compete with natural gas. This third chart demonstrates: 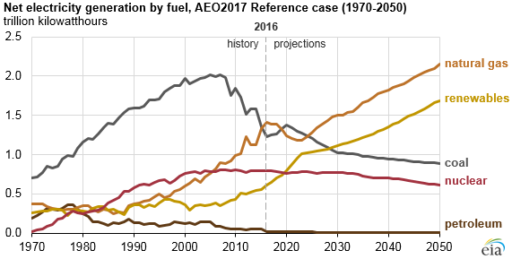 Notice the trend line for natural gas electricity generation as projected in the EIA reference case for 2017. It is steadily upward. So is the one for renewables, of course, which, yet again, demonstrates how the two sources are bound together on the same trajectory as if they were two sides of a ladder. Nuclear is projected to decline at the same time. Only subsidies will sustain it. It’s worth pointing out renewables, too, depend on such subsidies, whereas natural gas is free-market (non-distorted) private enterprise. The failure of one solar enterprise after another illustrates the futility of a subsidized existence.

We know, therefore, natural gas can and will continue to grow while nuclear, ever more dependent on subsidies, is likely to shrink. The growth of renewables, at the same time, is dependent not only on dispatchable natural gas to balance it out, but also the budgets and whims of government. That’s why it’s unstoppable natural gas and fracking is here to stay. Read these two articles and, if you’re a fractivist, go cry in your beer. It’s over. 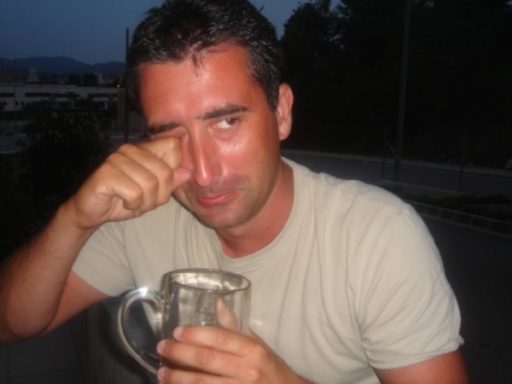 13 thoughts on “Unstoppable Natural Gas: Fracking As Far As the Eye Can See”