Yesterday’s UDRBC Seminar could not have gone better. Some 90 people attended to learn and Rep. Fritz announced his bill is up for a floor vote on Tuesday!

Yesterday, the Upper Delaware River Basin Citizens conducted its second annual seminar. It was conducted at the Equinunk Fire Company’s Lookout, Pennsylvania Fire Hall and 90 or so people attended, including several excellent speakers, State Senator Lisa Baker and Representative Jonathan Fritz. It was Fritz who brought the biggest news, noting his version of Baker’s Senate Bill for economic justice with regard to DRBC takings is up for a floor vote on Tuesday!

Fritz’s great news came with a promise from UDRBC founder and President Ned Lang to get his organization busy with letter writing and phone calls in support of HB 827, the House version of Senator Baker’s bill from last year (reintroduced this year as SB 305). The legislation, which we reviewed and discussed here. The formal description is “An Act designating certain activity by the Delaware River Basin Commission as the exercise of the power of eminent domain that entitles the owners of the property in question to appropriate and just compensation.”

It’s a bill that, if approved by the House and Senate, will force Governor Wolf to confront the reality of having sold out the rights of landowners in the Delaware River basin by announcing he will support a ban on fracking by the DRBC despite the proof from the SRBC experience that there is no threat to water quality. It will put Tom Wolf in the position of having to deny landowners compensation for natural resources he’s participating in stealing. It’s an impossible situation legally and politically and whatever he decides will set the stage for a legal challenge should a ban ever actually be enacted by the DRBC.

Ned Lang promised UDRBC support for the bill, so those of you reading this need to get busy and call, write or email state representatives. Here’s who they all are. Click on the links to find e-mail and phone contact information. [I suggest focusing on Lackawanna County representatives and Southeast PA representatives such as Thomas, Schroeder, Staats, Stephens, Murt, DiGiraolomo plus House leadership (Masser, Saylor, Oberlander, Toepel, Reese, Cutler, Turzai, Benninghoff)].

Fritz ‘s news was the topping on the cake but several other speakers enlightened the crowd. Wayne County Commissioner Joe Adams, for example, offered some calculations on the value of the land rights Tom Wolf and the DRBC plan to steal. He pegged at no less than $10 billion before even considering Utica Shale. He also, in talking with me later, suggested a nice way it could be paid; by a $2.67 monthly surcharge on the water bills of New York and Philadelphia residents for the next 20 years if they insist on ignoring the evidence there is no threat to their water. Makes sense doesn’t it?

The incomparable Brian Oram, a well-known local hydrogeologist, started off events with a very revealing discussion of what the real water quality issues (e.g., lack of water well construction standards in Pennsylvania, poor baseline testing at the outset of drilling, etc.). 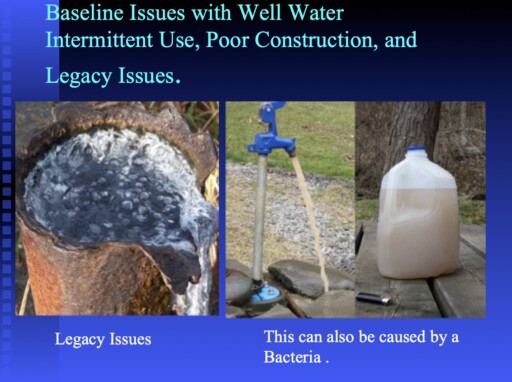 Brian also reviewed his own experience on a DRBC committee, noting it was largely an exercise in futility as other unaware members from academia, special interest groups and the lower basin with zero knowledge of gas drilling or life in the Upper Delaware dominated the meetings. His experience, he said, taught him this agency needed to stay in its lane, which is managing water quantity in fair way, and avoid getting into subjects such as land use where it’s completely over its head.

Oram was followed Pat Henderson from the Marcellus Shale Coalition who gave a thorough overview of what’s happening with natural gas policy in Harrisburg. Henderson specifically concentrated on two thing; Governor Wolf’s incredible eighth proposal for a severance tax; one that leave the Commonwealth with the highest severance taxes in the country. And, contrary to Governor Tom Wolf, Pennsylvania does have a severance tax. It’s called an Impact Fee and it has generated $1.6 billion to date for the Commonwealth. 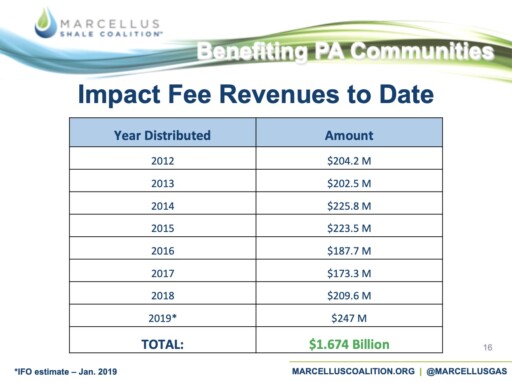 Pat also detailed the nature of the massive ratepayer ripoff being proposed by the nuclear industry. As he noted, the proposed bailout now being considered would throw huge amounts of money at an industry that, with the exception of Three Mile Island, is profitable, allowing owners of the state’s plants to sell them at premium prices while grabbing 68% of the electric generation market. It is a scam of astounding proportions and another reason to write your legislators.

Attorney Jeff Belardi, a member of the legal team representing the Wayne Land & Mineral Group also updated attendees on the progress of the DRBC lawsuit. He was optimistic and also noted work was in progress preparing for a challenge to the DRBC’s “Plan B” proposal to ban gas drilling in the basin. The Marcellus Shale Coalition is assisting in laying the groundwork for that second lawsuit, if it proves necessary.

Other speakers included County Commissioner Brian Smith, who made a passionate defense of farm and landowner interests and Susquehanna County Farm Bureau representative Jim Barbour who detailed the wonderful benefits gas drilling had delivered to farmers in his area. All in all it was a great program, with a great turnout and great hope for the future.