Natural gas exports just keep rising and exports contribute to the our economy in numerous ways, bringing economic development to both rural and urban areas.

Natural gas exports are growing and rapidly. Our natural gas is finding its way to Canada, Mexico and around the world with benefits to both rural and urban economies alike. Natural gas exports mean more lease payments, more royalties and more jobs, not to mention the multiplier benefits.

The Energy Information Administration’s Today In Energy blog covered the story of U.S. natural gas exports the other day and the news is just more evidence the shale revolution not only continues, but is unstoppable. Consider the following (emphasis added):

The United States exports natural gas by pipeline to both Canada and Mexico and increasingly exports liquefied natural gas (LNG) to several other countries.

U.S. exports by pipeline to Canada have risen since November 2018, when the second phase of the Rover pipeline and the NEXUS pipeline entered service. These two projects bring natural gas from the Marcellus and Utica plays in the Appalachian Basin to the Dawn Hub in Ontario, Canada, near the St. Clair border crossing northeast of Detroit, Michigan. 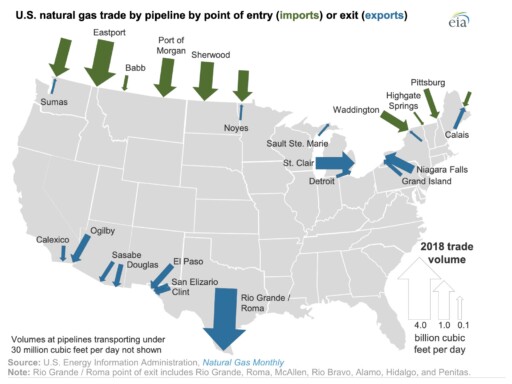 U.S. pipeline exports of natural gas to Mexico in 2018 averaged 5.2 Bcf/d, up from 4.2 Bcf/d in 2017. Much of the recent growth is attributed to increased U.S. exports out of the Permian Basin in western Texas as new pipelines were installed and as natural gas-fired power plant projects in Mexico entered service. Several existing pipeline expansions in southern Texas were completed during the past 12 months as well, increasing cross-border capacity.

These three trains have a combined capacity of 1.9 Bcf/d, bringing total U.S. LNG export nameplate capacity to 4.3 Bcf/d as of the end of 2018. LNG export volumes are expected to continue to rise in 2019 as an additional 4.0 Bcf/d of liquefaction capacity is brought online by the end of the year.

EIA’s Short-Term Energy Outlook (STEO) forecasts that U.S. net natural gas exports will average 4.7 Bcf/d in 2019 and 7.5 Bcf/d in 2020, with most of the growth attributable to increases in LNG exports.

That’s success by any measure. Fractivists can go pound sand.