Upstate NY folks are packing up and heading out, using U-Haul trucks to go pretty much anywhere else, especially where they permit natural gas development.

Recently, I came across two posts on the web about the utility of using U-Haul’s rental rates for moving vans as a proxy for measuring economic health. Professor Mark J. Perry, in two posts on his blog Carpe Diem (here and here) suggested people were leaving dead end locales to move to other places for “lower taxes and less red tape.” I immediately thought of Upstate NY, a place overwhelmingly burdened by the high taxes and overregulation the pols from New York City and environs, who dominate the state, imagine to be just fine. Here’s what I found. 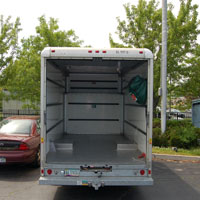 Upstaters Ready to Load Up and Leave the State

U-Haul, of course, allows its customers to pick up moving vans in one place and drop them off in another. Professor Perry uses these rates to illustrate:

He then offers this explanation:

It’s interesting that he uses Houston, the very definition of a city built on oil and gas, to illustrate, which tells you a lot about why the future is Texas, not New York. But, New York was where natural gas as an industry was born, so it’s quite ironic isn’t it? The opportunity Upstate NY might have to rebound and experience a little of what is making Texas great has been squandered; burnt on a pyre made for political incorrectness by Andrew Cuomo, Governor Corruptocrat, to satisfy his Manhattanite constituency.

How bad is it for Upstate NY? Well, let’s just compare to Pennsylvania, where the sunlight and weather are roughly the same as New York, to keep things real. Here are some rate comparisons: 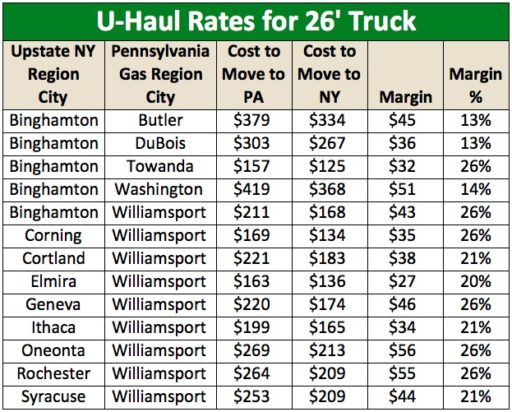 The data shows Upstate NY residents who want to move out can expect to pay an average of 20% more for their 26 foot U-Haul truck than people who want to move into New York. Pennsylvania gas region communities are, on average, 20% more in demand than Upstate NY counterparts. Contrary to the picture painted by fractivists, New Yorkers are more anxious to get to places such as Butler, Towanda and Washington than they are to move to Binghamton. Moreover, when Williamsport is compared to Binghamton, it has a 26% advantage, as illustrated below: 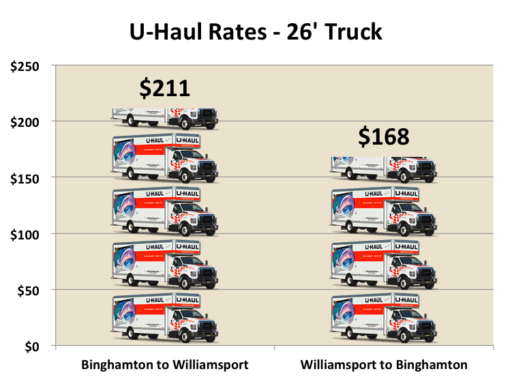 The same differential applies to Oneonta and Rochester and even Corning and Geneva, two Upstate NY cities that might be described as the best Upstate has to offer. Even Planet Ithaca pales in comparison to Williamsport, but, of course, that’s hardly a surprise to readers who know both places. It’s all just more evidence of the slow relentless economic decline of Upstate New York at the hands of Governor Corruptocrat as he continues on his mission to empty it for the benefit of New York’s protected gentry class.

3 thoughts on “U-Hauling It Out of New York: Upstate NY Packs Up and Leaves”