So many things happening right now illustrate an underlying problem in society at large and that is tunnel vision, especially on the part of our “experts.”

This WuFlu debacle has brought to the surface a growing issue that that threatens everything we value; tunnel vision. We’ve seen nations shut down on the advice of health experts using nothing but models while focusing their entire attention on their own narrow range of expertise to the exclusion of others. The models have, in retrospect, been so wide of the mark as to be worse than unusable. We have employed them to craft solutions worse than the problem and may yet lose civilization as we know it to some “new normal” utopian true believers and special interests ardently wish to impose on us. A “new normal” is, in fact, the last thing we need but it is most definitely being planned for us by our tunnel vision impaired experts.

Tunnel vision is a product of what Hayek called “the fatal conceit,” which is the idea being smart in one thing makes one wise in all things. Hayek was fond of pointing out “intelligence is is always overvalued by the intelligent,” and he was a very intelligent man. He understood, though, that one person, no matter how intelligent, could never substitute for the experience of millions handed down over many generations or the collective knowledge of those millions in transacting business with one another. His book by the same name had a profound and sobering effect on me when I read it several years ago. He was, essentially, though, saying what we all know to be true; intelligence is not wisdom.

The WuFlu fiasco as reflected in the actions of several governors who have relied upon their “experts,” shows how much damage tunnel vision can do. We have thrown caution to the wind along with jobs, businesses and lives to “flatten a curve” and save hospitals that didn’t need saving in a modern day episode of “destroying a village to save it.” And, then our governors who knew “flattening the curve” didn’t mean fewer cases at all but, rather, a longer epidemic—one spread out over more months—changed the rules. Learning there was now no more curve to flatten, they opted to flatten other things instead because they could. They became singularly focused on the disease because it rewarded their exercise of power. Nothing else mattered, not the economy, not the hospitals, not even community health; only the disease and a vague idea of controlling it along with everything else.

Tunnel vision hasn’t been limited to the WuFlu response, though. We see an even more classic example with the recent flooding in Michigan from this Mlive Michigan story (emphasis added):

Owners of a collapsed dam that caused major flooding in Michigan say they were pressured by the state to maintain elevated water levels on Wixom Lake behind it, despite concerns about the structure’s ability to handle flooding…

In April, Boyce and the state sued each other in state and federal court over the company’s attempts to lower Wixom Lake, an impoundment reservoir that the Michigan Department of Environment, Great Lakes and Energy (EGLE) says is home to endangered freshwater mussels that were killed by drawdowns in 2018 and 2019.

Boyce says it asked EGLE for permission to lower Wixom Lake last fall “due to concern for the safety of its operators and the downstream community.” EGLE and the Michigan Department of Natural Resources denied the request. Boyce lowered the lake without approval in mid-November “believing its safety concerns were paramount.”

Boyce sued the state on April 29 in Grand Rapids federal court, arguing the state lacks scientific validation for its endangered species concerns and should allow the drawdowns.

According to a counter lawsuit filed against Boyce by Michigan Attorney General Dana Nessel in Ingham County Circuit Court, the 8-foot drawdown was larger than the typical 3-feet and the exposed bottomlands resulted in the “death of thousands, if not millions, of freshwater mussels.”

Boyce claims it raised the lake this spring “under pressure” from the shoreline residents and state regulators.

“The state agencies clearly care more about mussels living in the impoundment than they do about the people living downstream of the dams,” said Lee Mueller, part owner of Boyce Hydro LLC, which owns the Edenville Dam.

Notice how the regulators attempt to evade any responsibility, but acknowledge their role by explaining the dispute was about how much the water should be lowered. And, then, as if to underscore their tunnel vision they express more concern for the “death of thousands, if not millions, of freshwater mussels.” than public safety. How is this possible?

How could a state agency put freshwater mussel interests above those of human safety? It happened because the “experts” looked neither right nor left, nor up or down. They view their job as being musclemen for the mussels. They cannot see beyond the narrow confines of those interests to recognize how those interests might need to balanced with others, similar to what’s happened with the WuFlu debacle, perhaps most colossal bureaucratic mistake ever.

So, how did we get here? That is the question, isn’t it. That intelligence isn’t wisdom is hardly a new concept; our experience the McNamara wiz kids who got us into Vietnam almost six decades ago should have proven that once and for all. The answer, I expect, is to be found in modern communication which is ever less thoughtful and more reactionary. A rumor becomes supposed fact in a blazing milli-second today and hysteria is generated at an ever faster clip. That hysteria swells the need for “really smart people” as one of my liberal friends expressed it several years ago in opining how to solve a particular issue.

There is a great danger in relying upon  “really smart people,” though. If we elevate them to being indispensable “experts” they inevitably start thinking of themselves as gods. And, because they really only know one thing especially well, they craft their recommendations based on that narrow stream of knowledge, which is what we see in all these cases and many more. Our society is now geared more and more to creating crises that supposedly require these “experts” and what we are getting as a result is more and more tunnel vision and less and less wisdom.

How do reverse things? Unfortunately, there is but one way and that is to question everything. We must also, when required, resort to ridicule of the “experts” (using good-natured humor if possible) to expose the tunnel vision. We must insist on public involvement  in decision-making, as that is where is wisdom must be sought. It will not be found with the “experts” but, rather, with the common man. We can have no more of governors who suppose their view is the only one that matters and that it is somehow proper to call those who disagree cowards. Indeed, what we need is a dose of humility and some courts and institutions that push back rather than roll over. 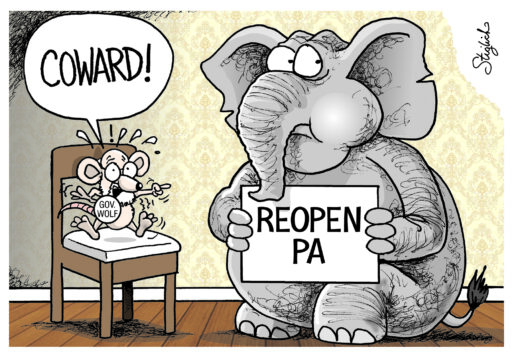