Tony Ingraffea is a fast-talking anti-gas advocate/activist, but Tony the Tiger was more like a greased pig that got caught in court yesterday in court.

Tony Ingraffea, known within my circle of gas supporters as “Tony the Tiger” made an appearance on the stand in Scott Ely trial against Cabot Oil and Gas yesterday. I’ve debated Tony more than once and know what a polite but slippery character he is. He’s a greased pig in that sense, darting here and there, squealing all the while, as the rest of us try to grab one of his feet and he’s good at it. He can make those quick turns to deflect his erstwhile capturers. It’s not that hard to get a grasp but it’s just as quickly lost as the guy wiggles to the left and leaves you with nothing but a greased hand. Yesterday, though, the greased pig a/k/a “Tony the Tiger” was caught and the squealing reached new decibel levels.

Attorney Stephen Dillard, one of Cabot’s attorneys won the prize for catching the greased pig, which he did during a still uncompleted cross-examination. Tony Ingraffea was called to the stand first thing in the morning by the Dimock plaintiffs’ attorney, Leslie Lewis. She spent a fair amount of time qualifying him, which produced this startling commentary from Tony (emphasis added):

Well, that’s a surprise considering his participation in Stop The Frack Attack events where he told the assembled radicals “natural gas is a gangplank to more warming,” myriad similar activities and this self-explanatory photo: 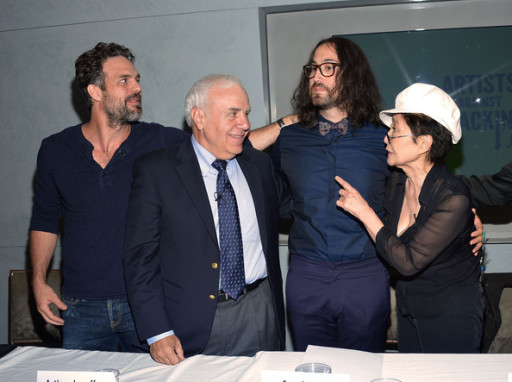 Then, of course, there are these remarks from him to the Park Foundation funded Truth-Out blog reporter:

My position is this. Where shale gas development has not yet occurred, ban it. Period.

Well, you get the idea. Drawing a distinction between what Tony Ingraffea does routinely and “activism” is like saying “it depends upon what the meaning of the word ‘is’ is,” to use the world’s most infamous example of word parsing. After a long discussion about the areas in which Tony the Tiger could legitimate testify as an expert, he was finally allowed to to do so and it was the usual stuff about how, based upon his review of DEP and other records, it was theoretically possible Cabot Oil and Gas drilling could have produced methane migration that impacted Scott Ely’s water supply.

Tony’s direct testimony went until late afternoon, and included a reminder from the judge about the need to be careful not to attempt to make the case about fracking as he recalled “both parties saying in their opening there’s no indication the waters in this case were affected by fracking fluids and asked the Dimock plaintiffs’ attorney if that was correct. Here’s the response:

That is correct, Your Honor. This is not a case about fracking, that’s correct.

The direct testimony ended with Tony saying this:

That was the point at which the greased pig contest started to get interesting; as Attorney Stephen Dillard proceeded to catch him by the hock, hold on and not let go. It began with Dillard’s observation that Tony had attended the jury selection and the opening statements in case – a highly unusual activity for an expert witness not scheduled to testify until later. He used this to then launch into some revealing Q & A with Tony the Tiger, asking the latter whether he wasn’t “an unabashed opponent of shale,” to which Tony replied:

I am an unabashed advocate…for an energy policy that results in there being a limitation on the development of oil and gas from shale formations, yes.

He went to acknowledge he was a “self-admitted advocate,” in fact, and Dillard then drove the point home with this exchange:

Q. And, you have appeared before a number of organizations across the country. Do you remember appearing in Colorado for an organization called Fracking Sense?

Q. And, I asked you about that in the deposition and you recently reviewed your testimony. You remember that, correct?

Q. You recall making the statement to that group that you would be lying if you said that every one of your papers on shale gas was entirely objective. Do you recall saying that?

Q. And you stand behind that, do you not?

A. Most certainly is.

That’s how it went and it got better as Dillard focused in on Tony’s activism and asked if he recalled making a presentation stating “Let the people of New York who run the show know you don’t need fossil fuels,” and Tony answered:

I don’t know if I ever made that particular statement but certainly the thought behind it and the context of renewable energy supplanting fossil fuels eventually, yes.

The Q&A then went further eliciting from Tony that he took offense at be called an activist, followed by this:

A. Not to my knowledge willingly. You might have seen me in a picture where in the background something was going on. I certainly was not participating in any such thing.

Q. You were just there?

Q. As a matter of fact, when you first were engaged in this case, you met Ms. Lewis, you were at an event in New York that was dealing with shale gas development, correct?

A. Are you asking me a question?

Q. That’s how you got involved in this case?

Q. By the way do you consider appearing here in court today public outreach?

A. Well, I didn’t think of it that way, but they are the public and I am speaking to them so it’s a form of public outreach, yes.

How’s that for dissembling and parsing? Well, there’s more.

Q. Now, I heard you try to compare yourself or contrast yourself with our expert Dr. Hilbert earlier this morning. The ladies and gentlemen will recall that. I think I heard you say that, after acknowledging you’re not a licensed petroleum engineer, that he is not one either; is that correct?

Q. Would it surprise you to know that’s wrong?

Q. Right. So, let’s talk about your actual practical real world experience in the oil and gas business, okay? I’m not going to ask you about what you might do as a professor or sitting at a desk behind a computer doing simulations. I’m talking about field experience, so we understand one another, okay?

Q. How many oil or gas wells have you participated in the actual design, construction, drilling or completion?

Q. None. How many cement jobs have you actually participated in designing or conducting?

A. In an actual well as opposed experimental well, none.

Q. Have you performed integrity or pressure testing of an oil or gas well?

Q. Have you ever observed hydraulic fracturing of an oil or gas well?

Q. By that you mean you looked at it on the screen, a computer screen in your office, is that right?

A. No…some distance away from a pad where fracking was occurring.

Q. What personal experience do you have with plugging or cementing an oil or gas well?

Devastating; that’s the only way you can describe it and it continued as Dillard got Tony the Tiger, playing the greased pig in this instance, to admit the following:

The final blow for the day, though, was when Dillard  got Tony the Tiger to talk about the funding of his PSE group, which he suggested came from organizations such as the Park Foundation and Sustainable Markets Foundation who are opposed to the development of shale gas. Tony said “I don’t know of any of the organizations that have granted money to PSE who would agree” when confronted with that notion and proceeded to argue that the latter was only a pass-through entity but, of course that wasn’t true as of 2012 when PSE filed its own 990 return as a 501(c)(3) charity. I don’t know the precise date PSE received its own 501(c)(3) designation from the IRS because the group apparently hasn’t registered with the New York State Charities Registry (at least it doesn’t turn up using its Federal ID number) as required by law.

It is also easy to quickly dispense with Tony’s contention about the purposes of those grants by simply visiting the Park Foundation grants page for 2013, which shows this:

That about sums it up, doesn’t it? It doesn’t take any more research than this to see what this greased pig is all about. The Tony Ingraffea testimony continues today, so look for more of the same in my next post.

15 thoughts on “Tony Ingraffea: The Tiger or the Greased Pig Who Got Caught?”