Tom Wolf is phony as politicians come. His disingenuous attempt, yet again, to craft a severance tax by hook or by crook serves to expose his duplicity.

Earlier this week, Marcellus Drilling News brought you the news that Pennsylvania Gov. Tom Wolf has sunk to a new low in his effort to slap a $4.5 billion severance tax on the Marcellus gas industry. Wolf closed the scenic Glen Onoko Falls Trail (in Jim Thorpe, PA) on May 1, ostensibly because of safety issues. He refuses to reopen it unless he gets his tax. We now have evidence that closing the trail was a political stunt orchestrated by Wolf. 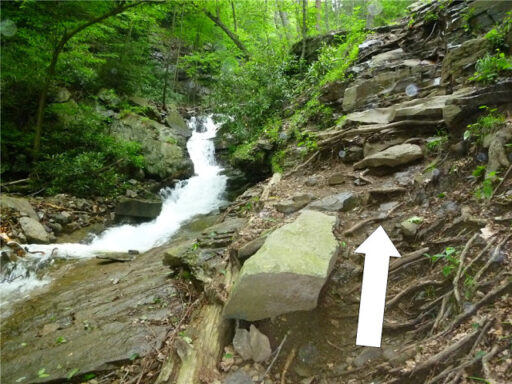 The Pennsylvania Game Commission closed Glen Onoko on May 1, claiming it had become “too dangerous.” At least 15 people have died and more than 80 have been injured on the steep, slippery trail going back to the 1970s. Gov. Wolf showed up three weeks after the Game Commission  closed the trail in order to hike the closed trail, announcing he’ll pay for safety improvements along the trail and get it reopened to the public–IF he gets his severance tax money.

Here’s the smoking gun that proves closing the trail and Wolf’s promise to reopen it is a political ploy–a scam. A couple of alert MDN readers pointed us to the article below that appeared in 2015 in the Lehighton Times News. From the article you’ll find there’s a long history of people getting hurt and dying along the trail, and that local officials wanted to make safety improvements, but, in 2015, the Pennsylvania Game Commission refused to make any improvements, saying the state considers the trail a “pristine wilderness area” and it “should be left that way.”

Yet now, four years later (out of nowhere), the trail *must* be closed and safety improvements *must* be added–with severance tax money. What happened to the trail being a “pristine wilderness area” that can’t be touched? Anyone else smell a rat? Here’s the story from the Lehighton Times-News (emphasis added)

People come from near and far, lured by tales of its breathtaking beautiful waterfalls guarded by rugged mountain terrain. But the dangers of this siren call to nature can be overlooked or minimized; too many have failed to pay heed and have paid a steep price, including death.

During the weekend, there were two more rescues at Glen Onoko Falls. Happily, these hikers, both women, were not critically injured. One had a lower leg injury; the other, a broken ankle.

Others have been less fortunate, and the list of killed and injured grows with each passing year. Spring, summer and early fall are especially dangerous.

He fell 40 feet to his death at the second set of falls, the same area where Perla Cabral, 31, of New York City, died in a fall on Aug. 10, 2013. Crossley slipped on the slick, moss-covered rocks, an all-too-frequent scenario that proves the undoing of ill-prepared hikers.

No official record of deaths and injuries is kept by the state or anyone else, but my tally taken from local newspaper records and other media accounts shows that at least a dozen hiker deaths and scores of serious injuries have occurred in or near the Lehigh Gorge State Park since the late 1970s. And most of those have occurred at Glen Onoko Falls.

The falls are not in Lehigh Gorge State Park but on neighboring state gamelands managed by the Pennsylvania Game Commission. Glen Onoko’s rough boulder-and-gravel trails are not maintained. This then becomes the simultaneous challenge and danger for hikers.

Despite the many incidents, hikers still fail to abide by basic precautions, while others underestimate the physical requirements to attempt the climb and descent.

At the parking lot where the ascent begins, hikers will find the one and only warning sign, but it is specific and unambiguous.

Cautioning trailblazers to hike at their own risk, the sign also warns: “Sections of the trail ahead are steep and treacherous. Hikers have been seriously injured and killed as a result of accidental falls from the trail and the gorge overlooks. You are responsible for your safety. Wear proper hiking shoes; use extreme caution while hiking in the gorge.”

Aside from the human toll these incidents take, they also require volunteer firefighters and other rescuers to retrieve the fallen from dangerous terrain. These volunteers put themselves in harm’s way, too.

Since 2005, rescuers have responded to more than 60 accidents and rescues at Glen Onoko.

Pleas from local officials for safety improvements, a better trail and access points, climbing aids or railings have been denied because the state maintains this is a pristine wilderness area and should be left that way. Officials of the Jim Thorpe Fire Department, which is the lead volunteer unit in rescue calls because of its proximity, estimate that it takes from 20 to 30 volunteers to rescue one person from Glen Onoko.

The Marcellus Shale Coalition noticed Wolf’s stunt and had a few suggestions for funding the reopening of Glen Onoko Falls Trail: 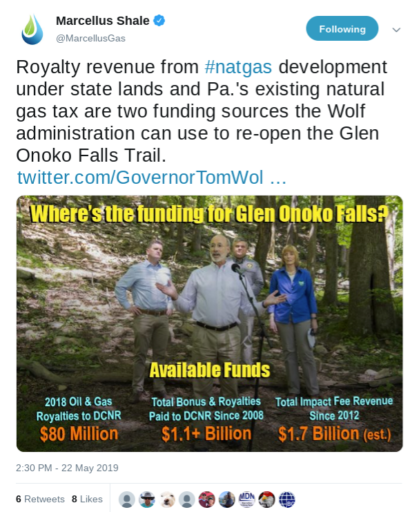 Editor’s Note: Is there any politician more duplicitous than trust-funder Tom Wolf? I think not. His latest proposed version of a severance tax is even more so. Its entire foundation is built on a fraud. Tom Wolf is a fraud.