Rep. Mike Tobash came to Susquehanna County the other day to extol the value of education in the trades and offer some fresh ideas on the subject.

Cabot Oil & Gas Corporation is a major contributor to trades-based education, steering thousands of dollars per year to career and technology centers (CTCs) across the state via Earned Income Tax Credit (EITC) funds. The school’s can use the money to pay for tools and uniforms for student supplies, as well as for testing and trades certifications.

Among the recipients of Cabot’s earmarked EITC in recent years have been the Schuylkill Technology Center near Frackville and the Susquehanna County Career & Technology Center (SCCTC), a short drive from Cabot’s headquarters near Montrose. At an event in Schuylkill County at which Cabot was supporting first responders, Cabot external affairs manager Bill desRosiers met Rep. Mike Tobash, who serves parts of Dauphin and Schuylkill counties and also serves as the chair of the state’s Subcommittee on Technical Education and Career Readiness. 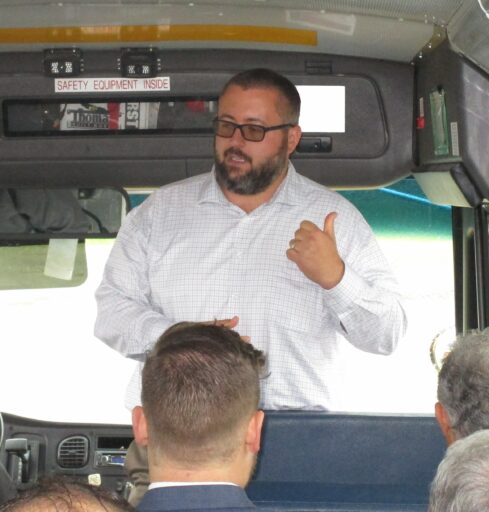 Bill desRosiers of Cabot explains the unique partnership that allowed for the construction of a new CDL training center at SCCTC campus as part of a bus tour of the campus provided for participants of their Oct. 17 visit to the school.

Tobash and desRosiers found common ground in their belief that career and tech education is a promising and underplayed commodity in Pennsylvania, not only for the gas industries but also for the industries that state lawmakers hope to attract. DesRosiers was further intrigued by Tobash’s ideas for improvements in the way that CTCs operate and are funded. After bumping into Tobash a few more times in Harrisburg and elsewhere across the Commonwealth, desRosiers invited him to SCCTC, which Cabot not only assists but regards as a model in tech education and its collaborations with local businesses and agencies.

“It was from those conversations that we had, that I recommended that he needed to come up and see our CTC,” desRosiers explained. Initiatives unique to SCCTC may not work for everyone, desRosiers noted, but he hoped Tobash could glean something from the visit that would help with his plans for the creation of a Career and Technical Education Investment Incentive Program. “This program, similar to EITC, will partner business investment with career and technical education students and secondary and post-secondary institutions to grow our Commonwealth economy,” said desRosiers.

There is no uniform code as to how the CTCs across the Commonwealth are run, he continued, adding, “I see that as a benefit, because the CTCs can be more flexible and creative to meet the needs and demands of their regions.”

The SCCTC is unique in Pennsylvania in that it was built by a single school district and remains in its oversight. Its new CDL school is geared to adults and high school students over 18. “That is a pretty unique partnership of labor and industry that didn’t require taxes to be raised or for the school to take on debt,” desRosiers related. Like many other CTCs across the state, the Schuylkill Technology Center is a cooperative run by a board that represents 12 public school districts.

Tobash spent a good part of Oct. 17 touring classrooms at SCCTC and the new CDL certification school, and seeking ideas from and addressing concerns of stakeholders of the school on how to best support initiatives like theirs.

Joining Tobash on the legislative side of the table were representatives Jonathan Fritz and Tina Pickett, both of who represent portions of Susquehanna County, and Rep. Mary Isaacson, a representative from Philadelphia County. She and Tobash had traveled to the top of the state, Tobash related, due to Fritz’s and Pickett’s glowing recommendations of the SCCTC and administrators Alice Davis and Ken Cuomo.

According to desRosiers, time did not allow for discussion on everything but set the stage for future talks. “There were half dozen things we wanted him to experience, but most important are the unique partnerships that the industry and Cabot have created in Susquehanna County with equipment donations, time in the classroom by our employees and contractors, and our EITC investments that we have made there.”

Additional topics addressed during the two-hour “think tank” included how to break the stigmas associated with trade schools, how best to prepare them for a rapidly evolving job market, and how the state can allocate available funding most efficiently. While the current Educational Improvement Tax Credit (EITC) works for some, almost everybody in attendance felt that the program is not performing up to its potential nor achieving all of its goals. 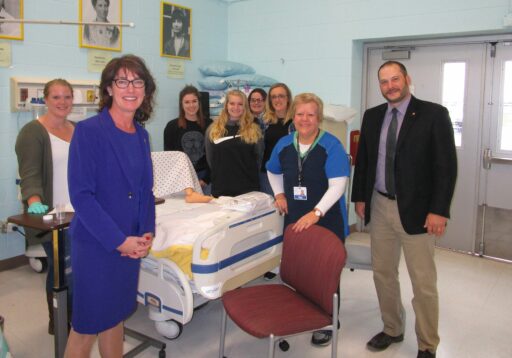 Across the state, Tobash explained, technical education is still mired in the stigma as a place to send students who are not succeeding academically. Despite the growing successes of such schools in terms of graduation rates and job placement, many public school districts are reluctant to send their brightest students there because the students’ high GPAs are more beneficial to the district itself.

On the other hand, many students who are not excelling in a traditional classroom setting become disenfranchised, while an education centered on the trades might be better suited to them. “CTC students have better attendance records and lower dropout rates,” Tobash remarked. Dropout rates in public schools might be drastically reduced, he continued, “if we could get the students into the right programs.”

That stigma can follow a student to the career center, SCCTC instructor and Lackawanna College School of Natural Gas & Petroleum program director Sue Gumble, noted. She teaches a three-credit Introduction to Natural Gas course at SCCTC for high school juniors and seniors. Some of her new students come in with the notion that they are not smart enough to go to college, some of them just because nobody in their families have succeeded at higher education.

Gumble spends a lot of time with first year students helping them embrace their strong points and convincing them that they are indeed capable of achieving more in the tech school environment. “Within three weeks of the class, they are so interested because it is so hands-on,” said Gumble. “Almost everybody who has gone through the course comes to the college.”

Cabot is one the companies that contributes the most funding to technical schools in the region via EITCs, which are distributed through agencies like CHCM. Some schools have declined Cabot’s offer, considering the EITC program too cumbersome, as school administrators are assigned with proving the financial eligibility of each of the students applying for the funds.

Owners of small businesses, who could gain directly from the partnerships through interns and other direct hiring, feel the same. From Shave’s perspective, the challenge is making it easier for businesses to get into the EITC loop. “It’s hard for them to sit down and do the paperwork,” she offered. Despite the potential benefits, business owners often tell Shave, “No thank you. It’s too time-consuming. We need to get back to work.”

Clayton is frustrated by the number of students whom she has seen get so close to graduation or course completion who suddenly quit because they cannot afford to get across the finish line. “Some students simply cannot make it work without financial assistance. After attending 1200 hours of training, they don’t finish because they cannot cover the cost of the testing fee,” Clayton related. “Others apply for jobs and cannot take them because they need their own tools. That’s part of the tuition fee and scholarship.” 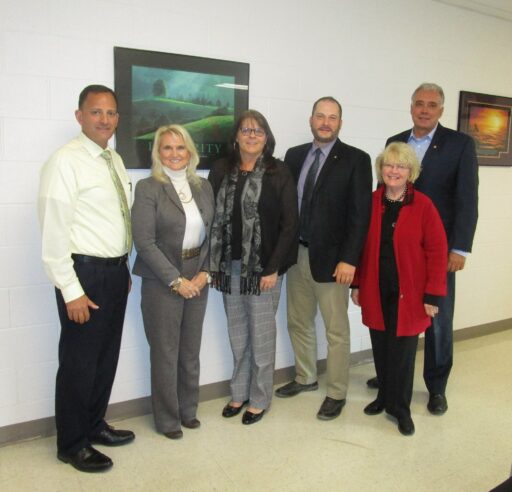 Tobash acknowledged that the unique partnerships between agencies like the NTIEC, local businesses, and the SCCTC have been crucial to their successes but agreed with panelists on both sides of the aisle that there must be changes at the state level to overcome what he termed “regulatory overkill.”

“Everybody wants more money, but that’s not the only answer here,” said Tobash, who is proposing legislation that will allow companies currently enrolled in the EITC program and others to get their funds more directly into the coffers of the technical schools. That will require a change of the Harrisburg mindset, he conceded.

“We’ve got to get the funding to where it is most proactive,” Tobash stated. “We need to have the courage to go in and say ‘We need these partnerships between industry and the educational corridor.’”

desRosiers felt that the meeting of the minds was fruitful in a number of ways, as was the tour of the school. “Ultimately, the model that we created at SCCTC is one that we can replicate across the Commonwealth and that I think other CTCs can learn from,” desRosiers stated. He looks forward to following up with Tobash and discussing potential expansion of the EITC program. “I think if we can get more people to understand how we use the EITC, there would be more funding.”