A political fiasco in Oregon reveals the rotten influence of big green money and groups such as Tigercomm LLC in environmental and fractivist politics.

The great Lachlan Markay continues to unravel how the filthy rich fund radical environmental causes that happen to serve their own special interests.

Markay is out with another superb post at the Washington Free Beacon that digs into Tom Steyer’s role in the outrageously hilarious scandal bringing down Democrat Governor Jogn Kitzhaber of Oregon. It turns out there is also a connection to the Energy Foundation, the Rockefellers and their Sustainable Market Foundation, about which we have written many times. The connection is a firm we referenced here, called Tigercomm LLC. It seems Tigercomm is an integral player in the work of both Steyer and Jay Halfon, the Rockefeller Rasputin. 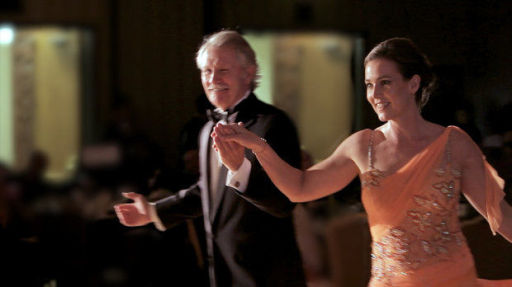 Kitzhaber and Hayes Before the Fall

If you’re not following the Kitzhaber saga, here’s a teaser from an article at NewsTalk 990:

The allegations all arise from his fiancee, who met Kitzhaber in 2002 after enduring a rough-and-tumble life. Hayes told The Oregonian in a 2011 profile that she grew up in a ramshackle house near Seattle and left home at 16, staying with friends until she finished high school.

By the time she was 29, she was a twice-divorced graduate student at Evergreen State College. She supported herself in part with the proceeds of an illegal sham marriage to an Ethiopian immigrant in 1997 while plotting with a boyfriend to grow marijuana.

In 1998, while trying to escape a relationship she described as abusive, she went to her boyfriend’s house carrying a stun gun. He beat her with it, according to court records. Hayes packed up her belongings and moved to central Oregon, living in a tent on federal land while finishing her thesis, according to the Oregonian profile.

She set up an environmental nonprofit and got involved in politics, meeting influential people, and in 2002 was the Democratic nominee for a legislative district in Bend. She met Kitzhaber in the waning days of his second term as governor when he campaigned for her.

Hayes lost her race. Kitzhaber left office at the beginning of 2003 and announced days later that he and his wife were divorcing. Later, he and Hayes reconnected, and their relationship became romantic despite a 20-year age difference. He is 67. She is 47.

In 2010, after eight years out of office, Kitzhaber made a successful comeback bid and became Oregon’s only governor to serve more than two terms. At his side was Hayes, who moved with him to the governor’s mansion in Salem.

Hayes took an active role in Kitzhaber’s administration. She used the title “first lady,” though the two have never married, and ran public initiatives targeting poverty and hunger. Privately, she was a frequent presence at meetings.

Kitzhaber has said he and Hayes took steps to avoid conflicts of interest.

No one would believe such a tale if it weren’t true and Hayes, of course, chose a career in environmental politics, which speaks for itself. Have no fear, though, the governor and she were careful to avoid conflicts of interest. 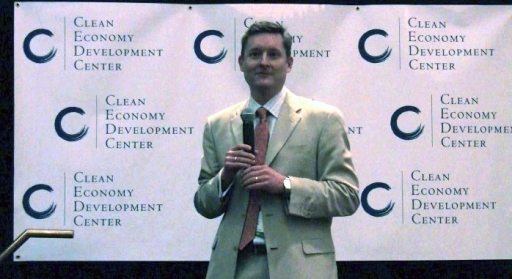 CEDC Executive Director Speaks at Launch with Help of Tigercomm

The controversy centers on Gov. John Kitzhaber’s fiancée, Cylvia Hayes. She was paid $118,000 by the Clean Economy Development Center (CEDC) to advocate for environmentalist policies in Oregon.

Hayes never disclosed those payments, despite acting as an informal adviser to the governor as he pushed a low-carbon fuel standard for the state.

Dan Carol, then a strategic adviser to CEDC, helped Hayes land the position. He was given a $165,000-per-year job in the Kitzhaber administration.

Kitzhaber is expected to resign today under intense scrutiny over the scandal. The scandal could extend beyond Oregon given Steyer’s involvement…

Hayes was reportedly a fellow at the CEDC  in 2011 and 2012, but as of late as August of last year, she was still listed on a since-deleted page of its website.

Also listed on that page was Kate Gordon, a member of the CEDC’s board. Gordon leads the energy and climate division of Next Generation, an environmental nonprofit group founded by Steyer.

Another director of the group, according to the website, was Mike Casey. Casey runs a media and public relations firm called Tigercomm that does polling and advertising work for Steyer’s Super PAC, NextGen Climate Action.

Casey reportedly wrote NextGen’s communications strategy for its involvement in elections in Massachusetts and Virginia in 2013. NextGen and another Steyer group, the CE Action Committee, paid Tigercomm $387,000 that year.

CEDC executive director Jeff King said in an email that Casey and Gordon were never board members, “but were erroneously listed as such at one point.” He would not say who listed them, why, when, or what their roles with the organization were. The IRS revoked CEDC’s tax exempt status in August after it failed to file annual reports for three straight years…

Internal Revenue Servicing filings show that the Energy Foundation provided $75,000 to CEDC in 2011 and 2012. The foundation said the funds would help “build support for dean energy policy in the Northwest.” It told the Oregonian that it was supporting the fellowship specifically.

That came after a $100,000 grant to CEDC the year before, itemized as “general support.”

Jessica Bailey, until 2012 a program officer for sustainable development at RBF, also served as a strategic adviser to CEDC.

A former CEDC director, Aimee Christensen, also worked with RBF through her consulting firm, Christensen Global Strategies. According to its website, another of her clients was the Sea Change Foundation, which has quietly poured hundreds of millions of dollars into U.S. environmentalist groups.

Among those groups is the Energy Foundation, which has received nearly $65 million from Sea Change.

The name Tigercomm LLC caught my attention. I had just referenced this organization in an article here on Jay Halfon, the Rockefellers’ Rasputin, noting it was one of the recipients of the Rockefeller and Park Foundation money funneled throughout the Sustainable Markets Foundation. Tigercomm LLC, in fact, received $380,717 from the that foundation for fiscal years 2010-2012. What did it do for that money? Well, in 2013 it was “communications,” in 2012 it was “media and advocacy” and in 2011 it was “program media,” so take your pick. 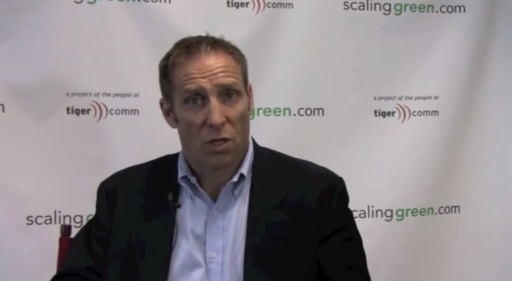 Whatever it did for Jay Halfon, it’s not hard to figure out what Tigercomm is all about: facilitating solar and wind development under the cover of attacking fossil fuels and anything connected with them.

Tigercomm represents a host of solar companies and the American Wind Energy Association, all of which is fine, of course. I’ve often used materials from the latter myself to argue for wind energy potential in certain locales. Moreover, it appears the solar companies represented by Tigercomm are all on the up and up (no Solyndra scams in the mix).

Yet, Tigercomm and, more specifically, Mike Casey, its leader, are deeply involved in the political war against fossil fuels. Is this another Al Gore template, where Tigercomm uses its environmental politics to land economic relationships that enrich it? The company certainly spends a lot of time promoting investment vehicles for solar and wind and even placed one of its own, Brian Mahar, as Senior Communications & Public Affairs Consultant at the U.S. Department of Energy, Loan Programs Office. The whole thing surely has the look and feel of crony capitalism.

Regardless, we know Tigercomm is closely connected to both Tom Steyer and the Rockefeller gang, which certainly accounts for their tactics. One of those tactics is a blog called DeSmogBlog.com, a favorite of fractivists and fossil fuel opponents for its hard-hitting stye, although (actually because) they’re quick with accusations and short on facts. It operates as an attack dog against anyone daring to challenge global warming orthodoxy or environmental purism. It was founded by a guy named Jim Hoggan and John Lefebvre, convicted felon who maintained his own blog within a blog at DeSmogBlog. (Tigercomm seems to have an affinity for convicted felons as it has both John Lefebrve and Jack Abramoff in its stable of associates.)

Tigercomm is closely associated with DeSmogBlog. Mike Casey, for example, is a frequent blogger at the site, with his own bio page. Tigercomm also apparently has DeSmogBlog as a client, though the group doesn’t appear on its client list. Its employee, Serena Connor (sconnor@tigercomm.us), is listed as media contact for this pathetic Fracking the Future report (and for the CEDC). It used widely discredited sources such as Bob Howarth and Earthworks (one of several groups where Rockefeller and trial lawyer Rasputin Jay Halfon helps call the shots – they also include the Park Foundation, funder of Howarth).

Finally, we note the Sustainable Markets Foundation (a Rockefeller creation run by Halfon) also funded DeSmogBlog to the tune of $110,000 in fiscal year 2011, the same year it funded Tigercomm LLC for $123,707 and produced the Fracking for the Future report. Coincidence? Don’t bet on it. This is how business is done among filthy fractivist funders. It isn’t just Tom Steyer playing the game for crony capitalist advantage – it’s also the other usual suspects among the wealthiest of the wealthy who are willing to halt the energy independence march of this country in its tracks and deprive rural Americans of a livelihood for the sake of their own narrow special interests. We have more than a Tigercomm by the tail, we have a nest of vipers to deal with as well.

1 thought on “A Tigercomm by the Tail?”