The gas industry has risen up to support PennEast in its appeal to full Third Circuit Court of Appeals of a bad decision by a three member panel of judges.

A highlighted copy of the full amicus brief may be found here. It is a very lucid document for a court appeal and lays out the chaos that will result if a poorly reasoned panel decision is allowed to stand. Here are some of the best parts (citations deleted and emphasis and some paragraphing added):

Industry Amici have direct interests in continued development of interstate natural gas infrastructure. These interests are increasingly important because interstate natural gas pipelines are “[t]he arteries of the Nation’s energy infrastructure.” The gas they move heats 69 million homes, generates over 30 percent of the nation’s electricity, and is used in the fertilizer that feeds our food and in many manufactured goods. The need to ensure access to an adequate supply of natural gas demonstrates the “exceptional importance” of these appeals.

The Panel Opinion is positioned to work a seismic shift in federal law applicable to the operation and development of critical interstate natural gas pipeline infrastructure: it is the first federal appellate decision that allows States a unilateral and unconstrained veto, subject to their sole discretion, over federally approved pipeline projects and routes based on an unprecedented view of the Eleventh Amendment.

This shift has profoundly disrupted the system of administering the Natural Gas Act (“the Act”) that has been in place for nearly eighty years. Industry Amici support rehearing en banc for two reasons.

First, the legal issues are exceptionally important. The Act and its eminent domain provision differ from other statutory schemes. Congress established the Act as entirely dependent on pipeline companies to build and operate federally approved critical infrastructure for the benefit of all, something that no arm of the federal government does. Congress did not in the Act grant States an unconstrained veto over federal approvals (as it did in other infrastructure statutes). Congress amended the Act to delegate the federal eminent domain power to pipeline companies in direct response to States’ interference in the development of federally approved critical infrastructure — the same sort of interference that New Jersey practices now and that the Panel Opinion allows other States to reprise.

Second, the practical issues are urgent and exceptionally important. It is difficult to overstate the scope or scale of the problems that the Panel Opinion creates. Most federally approved interstate natural gas pipeline projects involve some location on state land interests. Any State may now delay or halt the development of critical infrastructure simply by acquiring (or being gifted) a property interest in land in the federally approved pathway of a pipeline. 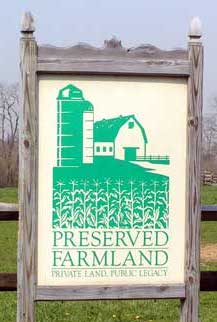 “Private Land, Public Legacy” says the sign, but “public legacy” apparently means public control and an excuse to stop a pipeline, if a bad Third Circuit decision is allowed to stand.

Likewise, any State may now impede the operation of existing infrastructure simply by acquiring (or being gifted) a property interest in a parcel in the pathway of the pipeline that is subject to a renewable easement, crossing permit, or right-of-way license, and then refusing to renew the easement, crossing permit, or right-of-way license. States may now block the operation and development of federally approved critical infrastructure within their borders, and this is untenable. These issues are critically important to the many millions of businesses and citizens that require access to natural gas.

The Panel Opinion disrupts the statutory scheme for the development of critical infrastructure that Congress established in the Act, which has operated effectively for decades. In 1947, Congress amended the Act to delegate to pipeline companies with a certificate issued by the Federal Energy Regulatory Commission (“FERC”) the federal government’s power to exercise eminent domain. This amendment was in direct response to States’ efforts to block much-needed, federally approved interstate infrastructure.

During congressional consideration of this amendment, extensive hearings established that Congress’s earlier omission of an eminent domain delegation from the Act created serious problems, including that natural gas often could not get to where it was needed, triggering shortages and shutdowns. Testimony directly articulated a concern that if the eminent domain provision became law, pipeline companies could use the federal eminent domain power to condemn State property. Nevertheless, the amendment passed both the House and Senate with no limitation restricting any federal delegee from condemning State property.

Second, the Act provides a unique role for States… The Act allows States to have a voice in FERC proceedings before FERC grants a certificate to a pipeline company (which is necessary for the company to condemn property), but not a veto at any stage, let alone after a certificate is granted.

The Panel Opinion disrupts this statutory framework in two ways. First, it erroneously assumes that with the stroke of a pen, and without any participation by FERC, an “accountable federal official,” may be available for the first time in 72 years to exercise the federal eminent domain power under the Act over State property interests. The Panel Opinion offered this as a “work-around,” but there is no statutory or regulatory basis for such a process. FERC, States, landowners, and pipeline companies have operated for decades without any such official in existence, and a single decision by a single court is woefully insufficient to conceive one.

Second, the Panel Opinion opens the door for States to use their property interests unilaterally to override FERC’s decisions about where to site infrastructure, even after FERC has issued a certificate for a project. The veto power created by the Panel Opinion is unconstrained and virtually perpetual – there are no legal standards or criteria for when or how it may be used. This would be enormously disruptive to FERC, which issues certificates after a lengthy process designed to ensure that proposed projects and their routes are in the public convenience and necessity. An unconstrained and unilateral State veto supplants FERC’s exclusive jurisdiction under the Act as well as FERC’s purpose and considerable expertise.

Likewise, the Panel Opinion is enormously disruptive to critical infrastructure. It leaves pipeline companies building or operating federally approved infrastructure virtually no procedural mechanism to seek legal relief to address disruption by States. States now may attempt to thwart federal approval by acquiring parcels of property along the proposed route; wait until after a project is federally approved to immunize from condemnation parcels along the approved route; or disrupt the operation of existing infrastructure by refusing to renew previously granted easements, crossing permits, or right-of-way licenses necessary for the pipeline to operate.

The Panel Opinion may leave pipeline companies and FERC forever vulnerable to a State’s attempt to exercise its new veto. Depending on the circumstances, this new veto may mean that federally approved pipeline projects cannot be completed, if they cannot be rerouted. Ultimately, this vulnerability takes the United States back to the years that the Act was in operation with no delegation of the federal eminent domain power – a scheme that Congress expressly rejected.

Standing alone, either of these disruptions is worthy of rehearing en banc. Together they establish an urgent need for the Court to reconsider these appeals.

The scale and scope of the practical difficulties created by these disruptions are urgent and extremely important. First, the disruption wrought by the Panel Opinion may occur on a dramatic scale. The opportunity for States to exercise their new veto will arise often. In light of New Jersey’s recent push to acquire property interests in privately-owned land, the size of the potential no-build zone created by the State’s new veto will be more than thirteen hundred square miles.

Additionally, there are numerous existing and proposed interstate natural gas pipeline projects elsewhere in the Third Circuit, which includes substantial portions of the Marcellus Shale region (which is found beneath approximately sixty percent of Pennsylvania’s total land mass).

As the first federal appellate decision on this issue, the Panel Opinion opens the door for States at any time to succumb to the political whims or parochial views  of their constituents, to the detriment of other States’ citizens. It creates an incentive for landowners to sell or gift to States any kind of property interest to avoid condemnation or obtain more money from the pipeline company. Depending on the kind of property interest conveyed, the problem may endure in perpetuity, forever immunizing parcels from condemnation for critical infrastructure.

Ultimately, if a State decides that it wants no further interstate natural gas pipeline projects within its borders, the Panel Opinion affords a legal mechanism for the State to pursue that goal. In 2018, the United States consumed more energy than ever before, and natural gas consumption reached a record high.14 Given the United States’ increasing reliance on natural gas and the concomitant need for new interstate transportation capacity, the scale of this problem is virtually guaranteed to grow.

Second, if the disruption wrought by the Panel Opinion is fully unleashed, there will be virtually no way to contain its scope. Although pipeline companies could consider commencing condemnation actions in state courts, there is no guarantee that state courts will be a viable option: States may eliminate at their sole discretion the opportunity for relief in state courts.

Further, because States’ new unilateral and unconstrained veto endures even after FERC approves a pipeline’s pathway (as in this case), pipeline companies (and FERC) will never know whether or how much difficulty is just around the corner.

The need for projects to be re-routed is unpredictable and unlimited: as this case illustrates, a State may force a pipeline company to re-route a project after both industry and federal authorities have sunk many years and expenses into developing a route and obtaining or providing federal approval for it. Even if a re-route is possible, the result will be a higher cost for gas for end users.

Moreover, the Panel Opinion demarcates no boundaries on the State’s power, leaving the door open for a State to assert that any kind of property interest that touches the property could preclude condemnation. Eager States have every incentive to push this limit and may assert that numerous kinds of State property interests that touch property in the path of a pipeline completely foreclose condemnation of the affected parcels. If the Panel Opinion remains in place, the only limitation on how many projects are delayed, disrupted, or halted, and how fast these effects materialize, will be the political whims of the States.

There must be boundaries on States’ opportunity to interfere with federally approved critical interstate infrastructure that has been determined to be in the public interest. As history has taught, the process of siting, building, operating, and expanding such infrastructure cannot be subject to the unpredictable free-for-all of States’ selfish political whims.