Natural gas use in upstate New York communities is common and long-standing, yet the state wrings its hands over allowing its citizens to produce it, even when the safety is well-documented and the economic need is apparent to all.  New Yorkers need to THINK, please!

Broome County lies next door to me and has used natural gas as a main source of heat for over 100 years, as have cities such as Ithaca, one of the hotbeds of natural gas opposition today.  Here’s how it happened:

“NYSEG traces its history back to October 28, 1852, when six Ithaca NY businessmen pledged a total of $75,000 and incorporated as the Ithaca Gas Light Company. The fledgling company soon laid mains and built a coal gas plant. In 1853 Ithaca’s streets saw their first lamps.

In the thirty years following the founding of Ithaca Gas Light, the use of methane gas grew steadily. Street lighting was extended beyond affluent business districts, while homeowners and businesses obtained lights for evening hours.”

Well over 80 percent of the homes in Binghamton heat there homes and cook their food with natural gas! Nearly 100 percent of that natural gas comes from gas wells that have been hydraulically fractured (fracked)! Wells that are in still production and providing our gas were fracked since 1940 with a mixture of 99 percent water and sand and one percent chemicals – an average of but four chemicals per well.

Technological advances in the oil and gas shale plays, such as the Marcellous Shale which lies beneath the Southern Tier of New York, are the only thing different today. What is new is the ability to drill sideways 5,000 to 8,000 feet below water aquifers, up to two miles in any direction, greatly reducing the amount of water used per cubic foot of natural gas recovered. Horizontal drilling also reduces the number of times these aquifers are penetrated compared to vertical wells.

Additionally, by using the new technology to drill sideways in the shale beds, we can now spread well pads over 2 miles apart, thus reducing the surface disturbance to our landscape and the number of well pads from approximately 16 down to one. Horizontal drilling is the most environmentally friendly way to drill and the conversion of coal-fired plants to natural gas power is already paying off big-time in the USA:

“Energy-related carbon dioxide emissions in the United States from January through March were the lowest of any recorded for the first quarter of the year since 1992, the federal Energy Information Administration report with a 20-Year Low in U.S. Carbon Emissions”

What about the supposed water contamination we have heard so many times?

Well, the Environmental Protection Agency as well as the Pennsylvania Department of Environmental Protection agencies tested 61 wells in Dimock, Pennsylvania, and several more in Franklin Forks at the request of litigants suing for alleged water contamination. The allegations of contamination related to hydraulic fracturing were unfounded with multiple test results showing no chemicals related to high volume horizontal hydraulic fracturing were present in any of the water wells tested.

Anti-gas activists have totally fabricated claims of water contamination attached to fracking, and greatly exaggerated the impacts of other incidents, instilling fear into the minds of people to put a halt to drilling and promote very costly and ineffective solar and wind systems that could not possibly meet our energy needs at this time. Lisa Jackson former head of the EPA, in fact, has testified several times in Washington that there has never been a case of ground water aquifer contamination from hydraulic fracturing, with over two million gas wells drilled throughout the United States. Her testimony has also been effectively repeated by every environmental agency from states where shale gas is produced.

Then there is this.  Just look around your own home and see if you use natural gas or liquid propane and or its products such as fertilizer and plastic? Chances are you do! With our neighbors right over the border in Pennsylvania and Ohio experiencing economic recovery as well as job growth, and non-drilling related business growth because of drilling activities (e.g., hotels, restaurants and increased sales of every type including auto’s, RV’s, boats, and even homes), all while collecting from the industry and the land being drilled upon, hundreds of millions of dollars in taxes that have lowered the burden of tax increases on its citizens.

Isn’t time we here in New York share in that success? Ad valorem taxes collected on drilling would stay right in the community being drilled and had we already been drilling instead of holding it up for five years with oppressive political bureaucracy, our local schools would be looking for ways to invest the money instead of cutting back jobs to meet financial demands.  We are, instead, gradually emptying out, as the following map reveals: 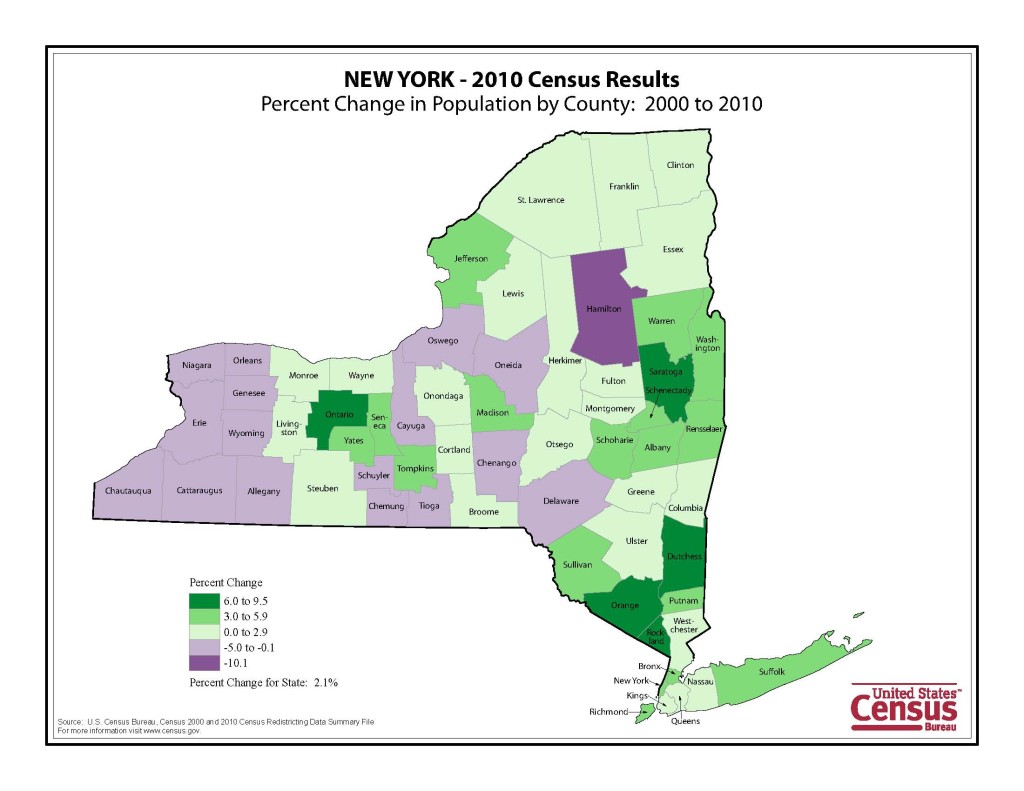 Don’t let environmental extremist leave upstate New York broke, without jobs for our children and grandchildren, based on unfounded fears and non-scientific arguments presented as evidence.  We are far to smart for that!

Tourism is a good thing but that alone cannot provide the good paying jobs that will keep our families together and make our communities stronger.

Farmers have fed us since the beginning when we became a community, and large landowners have always been good stewards of the land. For New York State to deny gas drilling to these hard working people who are your neighbors and care deeply about the land they love and will always protect is wrong. It’s especially wrong when the entire anti-gas movement is based on a movie called “Gasland” produced by an avante-garde filmmaker with a reputation for putting out junk and no education in oil and gas production. Josh Fox misrepresented the facts right from his opening statement throughout the entire film.  Don’t believe i?  See “FrackNation.”

Call or write Governor Cuomo and tell him It’s time to move forward on gas drilling just like every other state in the country with shale gas.  Tell him it’s not right to deny New Yorkers the right to produce what they’ve been consuming for over 150 years. Tell him upstate New York needs this economic opportunity to harvest what its citizens use. Ask the governor whether he’s running the State or Hollywood is now making state policy? Support your farmers and landowning neighbors, the true stewards of the land we love and own
Call Cuomo by phone (518) 474-8390 or mail: