Josh Fox continues to spin yarns about the natural gas industry but this time he got caught by Aspen Public Radio, no less, when a fair-minded actual journalist asked him an innocent but forbidden question.

Well, it finally is getting the attention it deserves.  Josh Fox’s phony story about getting a $100,000 lease offer is now exposed for the falsehood it always was.  Josh Fox never owned any land in Milanville, never got a $100,000 offer and didn’t get the lease he flashed on the screen in Gasland.

It was all the fantasy of a man “immersed in his own reality,” as he likes to say.  Several people, including members of the Northern Wayne Property Owners Alliance (NWPOA), the producers of FrackNation and folks at Energy In Depth (including yours truly) have been articulating the facts for a couple of years now, but it took a NPR reporter in Aspen who had the gall to actually ask Fox a simple question about it, to finally get some traction for the truth.

Fox didn’t see it coming.  NPR is the kind of venue he always chooses, one where he is allowed to make wild accusations about evil industry at will with no fear of being challenged.  He anticipated only fawning coverage and an uninterrupted opportunity to promote Gasland Part II.  What he got, instead, was a bit of real journalism from reporter Elise Thatcher.  One little question, delivered without rancor, turned his nerves into jelly and his mind into “how can I get out of this” mode, leading to a pathetic request to go off the record,” which Thatcher wisely denied.  She was respectful and solicitous of his views throughout the entire interview, but he crumbled at the mention of FrackNation’s challenge to his little leasing fable, the one offered at the beginning of thousands of stories on Gasland as evidence of his selfless quest for fame.

Here’s how the whole thing went down with a few of the observations and questions I suspect most of us might have in brackets:

Thatcher: Now, in the film FrackNation, which I’m sure you’ve heard of, have you seen the whole film?

Fox: No, and I’m not interested in actually answering questions about it. [Where does Fox get the gall to refuse to answer questions about someone’s challenge to the premises they’re there to discuss?  Unfortunately, it’s easily explained – he’s always gotten away with it before and assumed he could again.]

Thatcher: Ok, the question that I was going to ask you was in it, they refer to the lease that’s shown in Gasland I as being one that was put together by kind of a collective of your neighbors. And, so I was just curious whether that was true or not. [Note the question is non-threatening and to the point. She only asks if it is correct that the lease Fox has heretofore described as one that came from a gas company was really one assembled by a group of his supposed neighbors. He gets nervous and starts sputtering.]

Fox: Well this is a great example, and no I haven’t seen the film. But you know, to suggest that we never received a gas lease is insane, it’s insane, it’s absurd. And the leasing pool of the Northern Wayne Property Owner’s Alliance leased over 80,000 acres in the county, and we were part of that leasing pool. You know, dropped out um, at the stage where they said ok, you have to sign this.  [Thatcher never suggested Fox hadn’t received a lease, only whether the one he displayed in the movie was a gas lease or one put together by landowners.  If he never watched FrackNation, why did he immediately back off on his original story that he received it from a gas company?  Obviously, because he had watched FrackNation and knew it was true.  The lease he claimed to have received in 2008 from a gas company really came in 2009 from his neighbors.  He needed a new story line.]

Thatcher: Oh, so you were a part of it?  [Thatcher picks up on the shifting story line but doesn’t notice the fundamental falsehood – that the lease from the movie didn’t come until a year later than he said in the movie and didn’t come in the mail from a gas company.]

Fox: Yes, you see. You’ve been tricked. [Fox can’t resist condescendingly calling anyone who might, for a second, not buy his story line as “tricked” but Thatcher is still doing journalism and doesn’t go for the diversion.”  One can well imagine Fox’s pompous attitude didn’t help.]

Thatcher: But what was [interrupted]

Fox: The point is that, and I know the scene. [Ok, now he admits he has seen parts of FrackNation at least.] You know look, and they say oh look, they say this lease that’s in Josh’s film actually belongs to a farmer. Well, duh, we all got the same lease! [Fox again tries to push past the basic falsehood of Gasland – that he received a lease in the mail from a gas company in 2008 that was really a draft lease written in 2009 by landowners.  It doesn’t work.]

Thatcher: But I’m surprised you were partaking in those conversations because I didn’t understand that.

Fox: Well, listen, can we just jump off the record for a second here?  [Fox’s naïveté in this instance is nothing less than stunning.  It demonstrates how little exposure to real journalism he and his film have had, not to mention his arrogance and assumption.]

Thatcher: Um, may I ask why?

Fox: Well, because I honestly I have not wanted to, I mean can we or can’t we?  [A very thin-skinned Fox used to getting his way steps forward here.  It comes off poorly.]

Thatcher: I would really prefer not to. I’d be happy to talk at the end. And we can leave that question there if you prefer.

Fox: No, I’d really rather like answer the question in a thorough way if you want to ask it, um but I, you, know, honestly I don’t consider FrackNation to be reporting, I don’t consider it to be journalism. It is a willfully deceitful project.

Fox: No I don’t just feel like it. [Displaying even more arrogance and more anger,  Fox attempts a diversionary  ad hominem attack on FrackNation.] That filmmaker went to Dimock and told people that he was against fracking, that he was trying to save Ireland from fracking. He interviewed people under false pretenses. It’s been reported on extensively by Steve Warren in DeSmog Blog, you can look up those articles. Um, it is really upsetting when what you are trying to do is provide a public service to people and educate them on the practices of an industry when they are coming to your town and then to somehow be cast as a, you know, doing this for some other reason. [Fox resorts to effectively saying “how dare you or they question me?] Every trick in the book, from saying oh look, this isn’t Josh’s gas lease.  Um well, in fact the same lease, or a very similar lease, was given to people throughout all of Wayne County, it was one leasing pool, we were a part of it). So you see the willfully deceptive tactics that are there. It’s the same thing to state “oh, you know, this gas is naturally occurring” when we know, from gas fingerprinting, from the technology that is on display and the research that has been done by the gas industry that this is all willful deception. And it’s harmful and it’s upsetting. I have no control over it, but it’s not, I don’t believe it should be a subject of legitimate reporting on this topic. I think it’s beneath us. When you have climate change deniers go out and jump on to the fracking issue, just because it’s the next big thing, just to try to obstruct the dialogue, it’s really, unfortunately, I think. The reason why I’m not interested in answering questions about it is I don’t think it deserves a place in the real debate about this and the real reporting on this. I really don’t. And I don’t think it’s legitimate.  [How’s that for a petulant rant?]

Fox self-destructed in this interview and admitted the lease he received, came not from a gas company, but his neighbors, and not in 2008, but in 2009.  Thatcher never asked him about the $100,000 but that, too, was a falsehood, as I noted in this post at Energy In Depth.  That makes three pieces of “willful misinformation” but there was a fourth as well.

Fox painted himself into a corner when he admitted the lease in the movie was a draft NWPOA lease, not a gas company one.  He did so because he had to say how he had gotten it and he indicates he was “part of that leasing pool.”  He was very careful not to say “member,” which is no accident, because neither he nor his father, Michael Fox, who actually owned the two small parcels of land Fox claimed he owned, were ever members of NWPOA so far as that organization’s officials can determine.  Fox realized his faux pax when several media outlets picked up on the story, so he went to Fenton Communications, the leftist outfit responsible for the Alar scandal and behind Artists Against Fracking to clean up the mess.

Fenton, in what may only be described as a pitiful defense, put out this mass e-mail not even addressed to Fox or his father as evidence the latter was a member: 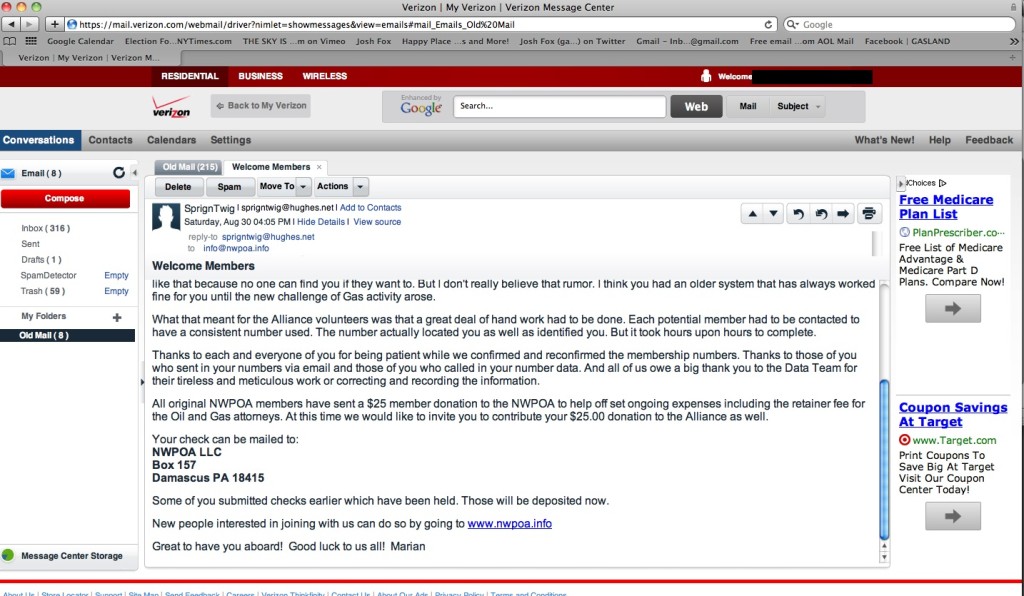 This letter was, as noted above, mass e-mailed and was sent to NWPOA’s “info” list, which included both members and prospective members the alliance hoped to get. There was a separate list for members. Was Fox’s father on the “info” list at one time?  It’s possible he was, but that didn’t make him a member unless he paid dues and there’s no indication, according to NWPOA, that he ever did.

But, all that’s beside the point.  Hundreds of these e-mails went out and many were shared and re-shared with non-members and people having no connection to NWPOA.  My own property was originally listed as part of the NWPOA pool of land and I didn’t become a member or sign a lease through the organization, yet I received numerous e-mails such as this as friends passed them along.  Moreover, this isn’t even the whole e-mail as can plainly be seen and ends with a request to become a member of the incorporated Alliance. So, Fenton’s “evidence” is pointless and proves nothing.

This is classic political obfuscation.  It’s not about the membership, although Fox clearly stretched the truth in that regard as well, but the movie falsehood.  Even if Fox was a full-fledged member of NWPOA, that would only legitimize the manner in which he got the lease.  It wouldn’t explain why he used a 2009 landowner-prepared lease and represented it as a 2008 gas company lease.  It wouldn’t explain his gross exaggeration of the lease signing bonus of $4,750 per acre to yield the magical  $100,000.  It wouldn’t sustain the narrative Fox has shamelessly used to present himself as the magnanimous defender against evil industry and its plans for his (his father’s homestead).  No, that was a complete fabrication and the worst of all lies because it went to motive,  Josh Fox’s Gasland was a fraud, and, as for the man himself, well….