Two articles yesterday show just how much more room there is for natural gas to replace coal and oil and reduce our CO2 emissions in the process.

A Today In Energy post and a CNBC article, both of which appeared yesterday, show just how much room is left to grow natural gas and continue the shale revolution with benefits redounding to all. Among those benefits are not only the obvious economic ones for rural landowners and urban consumers, but also reduced emissions of CO2 and far more important air pollutants. Coal and oil are both going to give more ground to natural gas as nuclear energy is overtaken by energy efficiency.

The Today In Energy piece, entitled “Coal is the most-used electricity generation source in 18 states; natural gas in 16” includes this neat graphic: 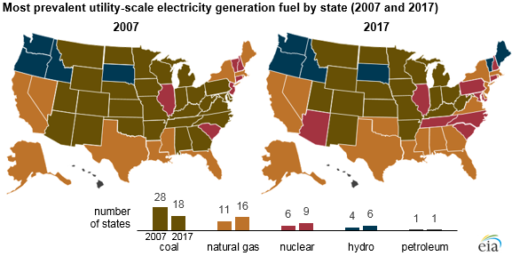 And, there are these key facts:

This means there is a tremendous opportunity to grow natural gas usage and reduce CO2 at the same time. As we noted here, the conversion to natural gas power generation brought about by the shale revolution has resulted in tremendous CO2 declines no matter how one measures the trend. We’ve seen an incredible 14.4% drop in CO2 emissions since 2007, when the revolution began, as we noted in this chart: 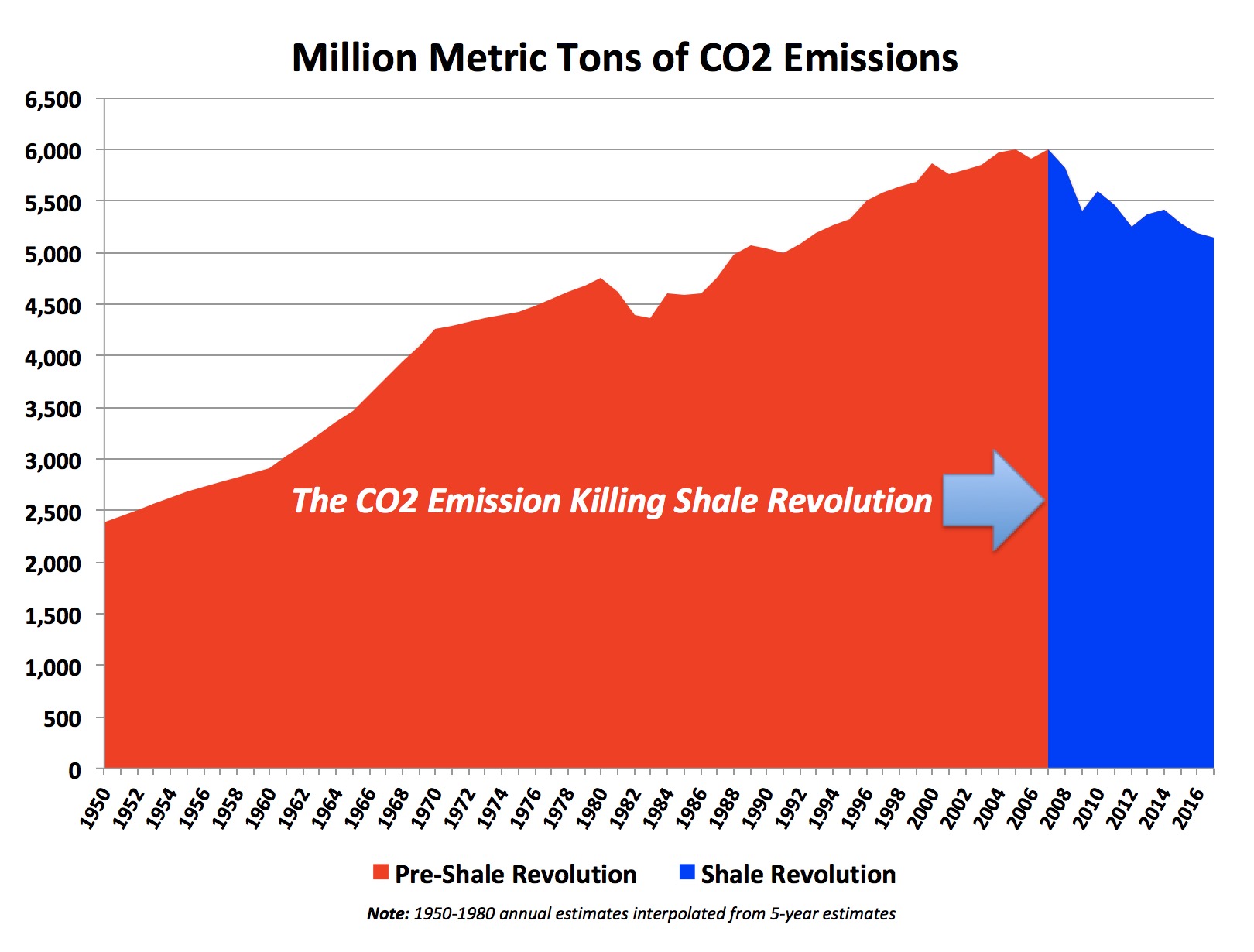 Now, imagine how far we can go if we make natural gas the fuel of choice for power generation in those other 18 states. It’s not hard and it demonstrates what wonderful possibilities are ahead of us in replacing coal with natural gas.

Then, there is oil. The CNBC headline is “Natural gas will overtake oil to become North America’s ‘single largest energy source’ this year, risk management firm says.” Here are the relevant excerpts from the story (emphasis added):

Oil will be toppled as North America‘s primary energy source this year, according to risk management firm DNV GL, with natural gas and electrification set to reshape the region’s energy future.

The Norway-headquartered firm said Monday that overall energy demand in the U.S. and Canada would continue to decline over the coming months, as improving efficiencies in the transport sector dramatically reduce North America’s reliance on oil.

“(And) there will be a massive change in technology in the transport sector, not only on the roads but also at sea,” he added.

In a separate report published Monday by DNV GL, the company said “natural gas is set to overtake oil as the region’s largest single energy source (this year) and remain the dominant source until 2050.”

What’s being referenced here is the replacement of oil in transportation by natural via CNG, LNG and electric vehicles—the electricity being generated more and more from the combustion of natural gas (as is apparent from the Today In Energy piece). We’ve written about all this repeatedly, including a post about LNG powered giant container ships a few days ago.

Put these two articles together and the bright future for natural gas is readily apparent. With that will come a combination of economic and environmental the likes of which the US has never seen.