The electric vehicle dream, though it typically benefits natural gas, is nothing but utopian foolishness being exploited by big-time hustler Elon Musk.

The utopian goal of getting widespread adoption of electric vehicles (EVs) has become a mainstay of the “Keep It in the Ground” crowd. And, getting taxpayers to foot the bill via subsidies is their favorite mechanism for driving adoption. 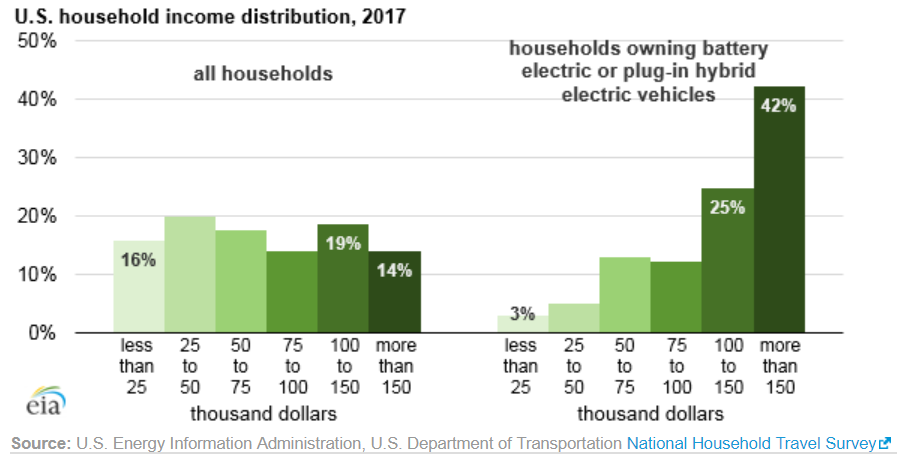 Electric vehicle sales are currently propped up by a number of federal and state subsidies, which range from the direct $7,500 federal tax credit to state-level benefits including additional subsidies and free charging, registration, parking, and HOV use.

But beyond the obvious difficulties in attempting to dictate consumer choice via taxpayer dollars, there are several other drawbacks to the current subsidy structure:

Perhaps the biggest problem with the current EV subsidy system is that it is largely just lining wealthy pockets, with a National Bureau of Economic Research paper finding that “the top income quintile has received about 90% of all credits” for EVs.

This reflects the current state of EV technology—EVs are currently more expensive, have limited ranges, and require extended periods to charge. All of these characteristics make them impractical as a primary vehicle for many middle-class Americans, so wealthy families purchasing an EV as a second or third vehicle tend to benefit disproportionately from subsidies and incentives.

As Daniel Gross noted in a Slate piece, “From an environmental, social, and economic perspective, it would be smarter to subsidize the purchase of super-efficient, modestly priced gas and diesel vehicles by middle and lower-income people than to give hedge-fund managers $7,500 for buying a Tesla.”

2. … but are disproportionately paid for by low- and middle-class taxpayers.

And these subsidies add up to real money. The federal tax credit is estimated to cost about $2 billion over the course of the program, and California alone set aside $140 million for EV subsidies in its 2017-18 budget. Add in the free registration, HOV use, free charging, and other benefits enjoyed by EV owners in some states—as well as the fact that they don’t pay the gas tax—and there is a significant freeloading problem.

As a recent study found, “EV subsidies also represent a wealth transfer from lower-income people to higher-income people and, therefore, could have negative consequences on overall income distribution.”

Moreover, at some point budgets become a zero-sum game. Money that is going to help the wealthy fill up their four-car garage is not going towards road improvements, infrastructure projects, or general-fund priorities like education and social services.

3. Without subsidies, EV sales fall dramatically. And they aren’t that high to start with.

Despite all of the financial incentives and PR promotion, EVs are failing to gain widespread traction. In fact, a recent EIA report found that EVs “only accounted for 0.6% of 2017 sales.”

This poor showing is dramatically enhanced when the underlying fiscal incentives are removed. For instance, when the state of Georgia ended a $5,000 state subsidy in 2015, EV sales dropped almost 89 percent. The same thing happened when Hong Kong repealed its extremely generous EV subsidies in 2017—there was a 95% drop in sales.

The ridiculously huge drop in sales corroborates the idea that these vehicles are failing to meet consumer demands and are certainly failing to compete in the marketplace on their own merits.

4. Auto companies are lobbying to extend the credits to keep the gravy train running.

Tesla and others in the industry are understandably reluctant to have to compete against traditional vehicles, given their history of bombing when subsidies are removed.

The federal subsidy is currently due to be phased out when each automaker sells 200,000 vehicles. Tesla has reached that milestone and others are on track to do the same, so it’s unsurprising that they are strongly lobbying to continue the taxpayer-funded gravy train. Some are even pushing Congress to uncap and extend the market advantage, even going so far as to try to make this handout to the wealthy permanent.

While continuing to subsidize EVs would certainly make automakers’ lives easier, consumers and taxpayers wouldn’t get the same benefit. As one Georgia state rep asked, “When you’re having a product that’s selling because it’s subsidized, what’s the push for [automakers] to be innovative and make that car less expensive or more valuable to the consumer?”

5. Utility companies are successfully muscling their way into the EV taxpayer-funded bonanza.

Utility companies—besieged by flat power demand and the rise of residential solar power—are looking at EVs and seeing dollar signs.

One of the major hurdles for prospective EV buyers is what’s called “range anxiety”—the justifiable fear that they will run out of power before they can get to a charger. States are spending hundreds of millions of taxpayer dollars to address that fear by creating residential, civic, and freeway charging systems. Utilities are the well-paid middleman: they are charged to build the infrastructure … and pass the costs onto their customers.

Utilities see EVs as a gift that keeps on giving—customers foot the bill for building the charging stations, and those charging stations then deliver increased power usage for years to come. A new study from the National Renewable Energy Laboratory found that over the next 30 years, EVs could double or almost triple annual growth rates for power demand.

Unfortunately, this EV infrastructure is incredibly expensive to create—and its costs will be borne by consumers already struggling to pay their electric bills. California, for instance, recently put utility payers on the hook for over $768 million in projects to promote the electrification of the transport sector—despite the fact that over 20% of the population are currently below the poverty line and its citizens are already paying about 60 percent more for electricity than the rest of the country.

As with other EV subsidies, EV charging projects are burdening the average taxpayer in order to smooth the way for the wealthy.

What began as a well-intentioned, if misguided, attempt to help consumers adopt a new technology is degenerating into cynical money grabs. Subsidies clearly aren’t working for their intended purposes and are inflicting significant costs on the very groups they were ostensibly created to help. It’s beyond time to put this failed experiment behind us.

Editors Note: This story mentions Tesla several times, as well it should. Elon Musk, the world’s all-time greatest huckster is taking taxpayers for a ride in a subsidy vehicle otherwise known as the Tesla/SolarCity scam. We’ve covered it here numerous times here but Musk seems to be losing it at an accelerating rate as more and more people come to realize Emperor Elon is wearing no clothes. His recent mini-submarine proposal to rescue the cave children was widely panned for what it was; a disgusting attempt to grab publicity and maintain his elitist superstar image at the expense of a courageously successful rescue effort.

Tesla Inc. asked some suppliers to return a portion of its payments to them in an attempt by the electric-car maker to turn a profit, the Wall Street Journal reported, citing a memo sent to a supplier last week.

The company, whose eroding cash position has alarmed investors, requested a “meaningful” amount of payments made since 2016 to be returned, according to the letter. The note stated all suppliers had been asked to help the Californian company become profitable.

The request indicates more struggles for Tesla in its quest to reverse losses. While Chief Executive Officer Elon Musk proclaimed a “real” carmaker after hitting a weekly goal of producing more than 5,000 mass-market Model 3s, there are doubts the volumes can be sustained. Some of the increased output, pivotal for boosting revenue and earnings, came from a makeshift tent.

Musk has been scamming everyone. He has gotten by hitching his vehicle to the political correctness train, exploiting a Jules Verne sort of ability ton dream technology, talking big and keeping his hand out. Taking advantage of a dummy corruptocrat like Cuomo, though, was easy compared to what it will be like to try to talk buyers and investors out of more of their own cash under these circumstances. Cuomo has always worked with other people’s money.

Meanwhile, if electrical vehicles are ever able to compete that will be good for natural gas, of course, but doesn’t it make more sense to go straight to CNG vehicles, with no middleman?

New Greta On The Shelf Doll Will Track Your Climate Sins