There is a campaign against the middle class in New York, and especially their land ownership, a war under the rotten influence of New York’s elites.

I was thrilled last evening to read a message sent out by my friends and former associates at Energy In Depth regarding the scheduled testimony of EID’s Simon Lomax at a House Science Committee hearing this morning, where he will deliver a white paper articulating how the Health and Environmental Funders Network (HEFN) and the Sustainable Markets Foundation (SMF), entities funded by the Park Foundation and the Rockefeller family essentially conspired to construct the junk science pretext for their puppet, crime boss Governor Andrew Cuomo, to say no to fracking “at this time,” aided by an ambitious sycophant by the name of Howard Zucker. 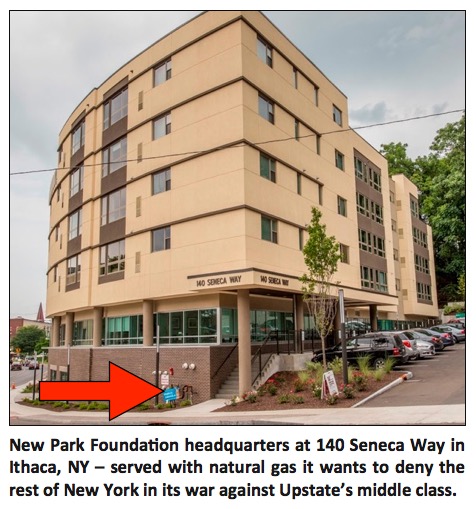 Here, for those of you who didn’t receive the alert, is the message (also note the hearing can be watched on-line here):

Tomorrow morning, April 23 at 9:00am ET, Energy In Depth’s (EID) Simon Lomax will testify before the House Science Committee and unveil a new EID whitepaper, which details the massive influence of anti-fracking activists on the “science” behind the ban on fracking in New York.

This whitepaper examines the 184-page “public health review,” prepared by Gov. Cuomo’s health commissioner to justify the ban, and finds strong evidence of political pressure from a well-funded, well-organized network of foundations and activist groups opposed to shale development in New York.

Simon Lomax is one of the best investigative reporters on the EID beat and he is well aware of the relationships we have outlined here at NaturalGasNOW and before that at EID. They all revolve around the role of the Park Foundation, the Rockefeller family and an individual I have referred to as the Fractivist Rasputin, a trial lawyer by the name of Jay Halfon, who is integrally involved with all of them and runs the SMF.

The alert from EID also includes a summary of the white paper:

On Dec. 17, 2014, New York Gov. Andrew Cuomo (D) announced a ban on so-called high-volume hydraulic fracturing activities in the state of New York. The unprecedented decision overturned two earlier findings from New York state environmental regulators that hydraulic fracturing technology could be applied safely and should be allowed to proceed under stringent regulation.

The decision was at odds with broad agreement among scientists, engineers and regulators from state and federal environmental agencies that hydraulic fracturing has been conducted safely for decades – including, incidentally, in the state of New York. The “ban fracking” agenda endorsed by the Cuomo administration has also been rejected by leading national Democrats, including senior environmental officials in the Obama administration, as simply too extreme. So, how was Gov. Cuomo able to construct a justification for a decision that falls so far outside the mainstream?

This Energy In Depth whitepaper examines the 184-page “public health review,” prepared by Gov. Cuomo’s acting health commissioner to justify the ban, and finds strong evidence of political pressure from an organized and well-funded network of foundations and activist groups opposed to oil and gas development, and particularly shale development, in New York. Research papers praised by the Cuomo administration as “bona fide scientific literature” included reports that were financed and produced almost entirely by professional opposition groups. Moreover, the same group of foundations responsible for funding the research also had strong financial ties to several organizations that define themselves as media organizations which were used to promote the research, and the “ban fracking” campaign groups that, in turn, used the research to lobby and influence the Cuomo administration.

In effect, the foundations were marshaled to create an echo chamber of research, media and campaign activities that drowned out the facts in New York’s debate over hydraulic fracturing and Marcellus development. In particular, this whitepaper spotlights the Health and Environmental Funders Network (HEFN) – led by the Park Foundation – and the Sustainable Markets Foundation (SMF) and six key research studies cited by the Cuomo administration to justify the shale ban:

The whitepaper highlights and examines the many substantive issues that undermine the factual basis upon which these research papers are founded, and then maps out from there how the findings of this research are packaged up, sent out to, and promoted aggressively by various media platforms that, in many cases, receive funding from the same sources that underwrite both the development of the original research, and the activist-led advocacy work that amplifies it subsequent to its release.

At almost every turn, these research, media and campaign activities have financial ties to the HEFN and SMF.

For example, when acting New York health commissioner Howard Zucker held up a paper developed by a group called the Global Community Monitor (GCM) paper as an example of “bona fide” research, he failed to mention six of the study’s authors had ties to opposition groups. All three peer reviewers also failed to disclose their personal opposition to shale development, in violation of widely accepted codes of professional conduct. One of the reviewers, who later claimed she was unbiased, is literally the co-founder of New Yorkers Against Fracking.

HEFN and SMF’s financial ties to the groups that produced the GCM paper exceed $3.7 million. Their ties to media outlets that promoted the GCM paper, including InsideClimate News, Grist and National Public Radio, exceed $2.2 million. This research and media coverage directly benefited campaign organizations that have received in excess of $16 million from the HEFN and SMF to build the political case for banning shale development in New York.

The first thing immediately noticeable about the fractivist campaign, once you dig into it in any depth, is how few people are really involved in a leadership role. It’s all the same handful of people operating under a multiplicity of group names intended to make it appear there is an uprising among the commoners, as if opposition were just popping up here, there and everywhere on its own, but the reality is far different. 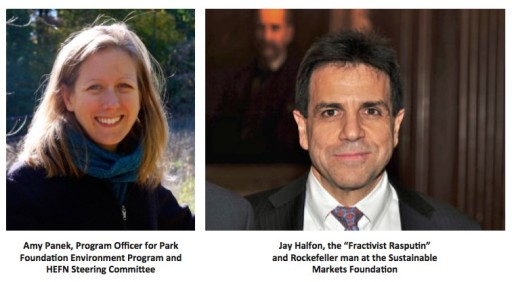 The second thing that quickly becomes apparent is the role of an even smaller number of New York’s elites who serve as the puppet-masters from behind the scenes. They fund every bit of the campaign and their names are Park and Rockefeller (with help from the Haas and Heinz families in Pennsylvania, and a couple of new money people such as the Schmidt and Simon families). They are at war with middle class landowners for possession of upstate New York and other areas where hydraulic fracturing holds the promise of economically rescuing the latter. Their’s is a rotten influence on the rotten politics of a corrupt state and the rot threatens to expand. Thank you to EID for helping to cut it out of the big apple.

12 thoughts on “The Rotten Influence of New York’s Elites”