Rockefeller family special interests have been at the core of fractivism, the divestment movement and so much else that is wrong with our energy policy.

It is now clear the RICO scam that has engulfed numerous academics and several attorneys general was instigated by the Rockefeller family. They manipulated everyone into going after Exxon, which was a scheme just a little too perfectly poetic to pull off without getting caught. The lure of the whole ginned up story was that the connections between the family and the promotion of the “Exxon knew” theme, a matter that might normally be expected to raise eyebrows and questions, was submerged in the irony of the situation. What reporter would ask why the family was so involved, when they could write headlines about the irony of Rockefellers challenging big oil and ExxonMobil, in particular, it being the  descendant of Standard Oil?

As it turned out, though, it was too cute by half and it’s now all coming out drip by drip as Energy In Depth and others are pulling back the curtain and revealing the wizards behind the whole scam. What’s still missing, though, is the explanation of exactly what those Rockefeller family special interests really are. 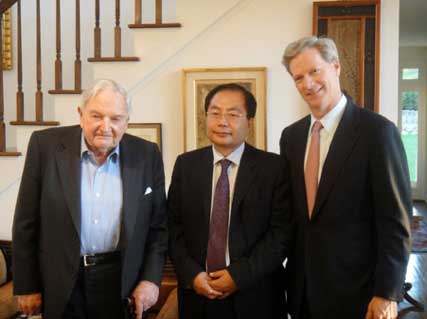 We are, in fact, frequently asked why the Rockefeller family, and the Park, Haas, Heinz and Simons families would engage in such tactics. We are effectively asked to suppose they are simply magnanimous, which, of course, is often the case. But, anyone who believes that’s all there is to it is sadly naive. There is much more, beginning with power, influence and reputation. Still, what leader isn’t motivated by those things to some extent. We can hardly indict our elites for elitism as most of would do the same thing if we were but in the same position – let’s be honest about that.

What’s different in the case of the Rockefeller family special interests and several of its partner organizations is this; the money they spend on divestment, fractivism and climate change conspiracy theories such as “Exxon Knew” serves very specific and much bigger monetary interests. Nat Simons, the guy behind the Sea Change Foundation (which is, in turn, behind the Energy Foundation) is, for example, heavily invested in “clean energy” scams, for instance. The Rockefeller family special interests include a bit of that along with major investments in Chinese petrochemical infrastructure. Tamping down of the US oil and gas industry just happens to benefit those investments.

Tamping down oil and gas in the US also serves another Rockefeller family special interest; it’s investment in the Catskills where the family and other members of the NRDC gang having been running a land scam for decades, “making a wilderness” by assembling a private enclave for the rich and famous while ripping off the taxpayers to run interference and make ever more land deals possible. Fracking is an enormous threat to this RICO type scheme because it presents reasons for landowners to hold onto land the family wants for its wilderness.

Andrew Cuomo and Eric Schneiderman, along with many of their predecessors, have played along; Cuomo giving the NRDC gang whatever they wanted in the way of decisions and Schneiderman going after everyone standing in the way of Rockefeller family special interests. He’s gone after tiny upstate towns such as Sanford as well as Exxon, which happens to possess major gas lease holdings there, on the edge the wilderness the family is busily creating. The State of New York has also thrown one sweetheart deal after another to the NRDC gang, buying out their acquisitions of wilderness for three times the value and even loaning them state economic development funds to do so, helping to mold a parkland buffer around their enclave at public expense, while giving them profits to do more of the same. 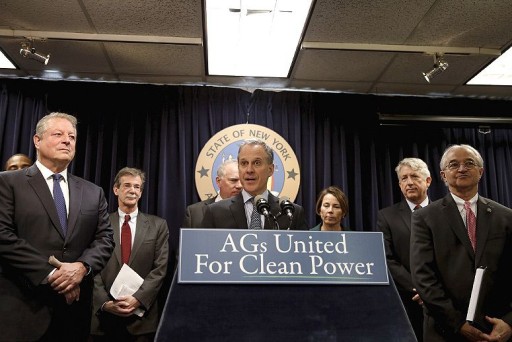 Schneiderman’s role in the Exxon RICO matter, therefore, is no coincidence. He’s promoted the NRDC gang and Rockefeller family special interests at every opportunity. He’s pursuing Exxon for the same reason he pursued the little Town of Sanford; the company, through its XTO subsidiary, owns leases the family wants to kill and those leases are still alive. He won’t stop until their dead. The point of the attack on Exxon is, among other political reasons, to blackmail XTO into terminating or not renewing those leases, some of which were made with upfront bonus payments of as high as $6,500 per acre for land that might have otherwise been available to the NRDC gang and friends at prices as low as $1,000 per acre.

These are the real Rockefeller family special interests; protecting investments in other industries as well as oil and petrochemicals in Russia and China and land interests in Upstate New York. There’s also the politics of the whole thing, of course, and the fatal attraction of having influence and power, but don’t think all that, which is what gets the most attention, is what’s most important. No, the Rockefeller family special interests are as pecuniary as could be and they’re still in the oil business. Their philanthropy is self-serving. It’s what their fast unraveling RICO scam (ironically pursued with RICO tactics by the La Jolla Junta) is all about. Yes, this, and not the mythical irony of Rockefellers attacking oil, is the real story. When will we see this story covered in the news?