Great news! More gas companies are drilling for Utica shale gas in Pennsylvania and the Utica is even bigger than the Marcellus with huge future potential.

The Utica Shale is beginning to get noticed in southwestern Pennsylvania. The rise of the Utica can be traced back to a single well drilled by CNX Resources in 2015.


That first well, the Gaut well, became the second-highest producing Utica well anywhere at the time–61 million cubic feet per day (MMcf/d). Since 2015, CNX has pioneered drilling Utica wells in Southwest Pennsylvania (SWPA). And 2019 may be the year the Utica soars in Pennsylvania. 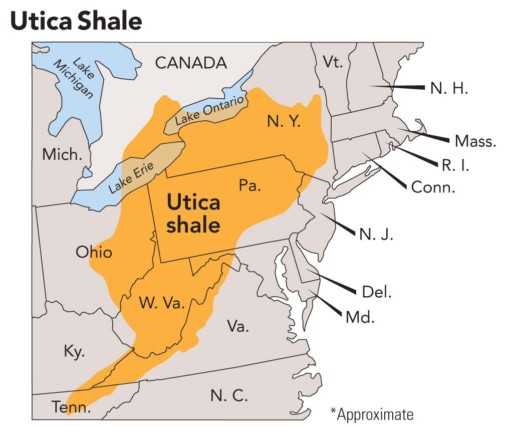 Other companies besides CNX drill in the PA Utica, including Huntley & Huntley, Chevron, XTO Energy. But the story of the Utica in SWPA is mainly the story of CNX. An extensive article appearing in the Pittsburgh Business Times tells that story.

In the early days of the Marcellus Shale boom, as gas companies decided where to drill, a section east of Pittsburgh in and around Westmoreland County took a back seat.

The gas, in the deep, dry Utica Shale thousands of feet underground, was tougher to access than the shallower Marcellus. It was millions of dollars more expensive to drill than the most efficient Marcellus wells. And no one knew how productive the wells could be.

Meanwhile, the Marcellus captured all of the headlines and a lot of the investment. But over the past few years, drilling by several companies — most notably Canonsburg-based CNX Resources Corp. but also Huntley & Huntley Energy Exploration, Chevron Appalachia LLC and XTO Energy Inc. — has started to prove there are opportunities in the deep Utica and other shale layers like the Point Pleasant and the Trenton Limestone, often below the Marcellus that has already been tapped.

The handful of wells that have been drilled in that area around Westmoreland County, along with an anticipated boost in permit applications in the Utica, are raising that part of the play’s profile.

“It will be a very important year to see how far the Utica has come along,” said Sameer Panjwani, a director at Tudor, Pickering, Holt & Co., an energy-focused investment bank based in Houston.

Takes more science ahead of time

When it comes to the deep Utica in Westmoreland and surrounding counties, there’s no natural gas driller that has spent more — and proved more — than CNX, a Southpointe-based natural gas company that spun off its Consol Energy coal operations in 2017.

The first big well for CNX was the Gaut, located in Westmoreland County and turned on line on Oct. 3, 2015. It quickly became the second-best producing Utica well at the time, with 61 million cubic feet of natural gas flowing per day. That’s significantly above the average Marcellus well. It was followed two years later by nearby wells Aikens 5J and Aikens 5M, which have showed the Gaut wasn’t a fluke.

But it almost was: Few people outside of CNX thought the Gaut would be successful. That it was — and was repeatable — convinced other drillers that there was opportunity in that overlooked area.

“The extension of the Utica by CNX with the drilling of the Gaut well was a game changer, certainly for us, but for the industry as well,” said Christopher Doyle, CEO of Southpointe-based Huntley & Huntley Energy Exploration, a privately held company also known as HHEX that has about 100,000 contiguous acres in the Marcellus, Utica and Upper Devonian, mainly in Allegheny and Westmoreland counties.

“Not only is it a good well, but behind the (EQT) Scotts Run well, it’s probably the second-best well in the basin.”

Why has CNX been so successful? Part of it comes from the intense data analytics that CNX does. And, said Andrea Passman, SVP of engineering and operations for the Southpointe-based driller, it’s an understanding that while they may be neighbors, there’s a vast difference between the structure of the Marcellus and that of the Utica.

“The Utica takes more science ahead of time, which is a big difference between the two plays,” Passman said.

It has taken a while for companies to understand their holdings in the deep Utica, particularly outside the core areas of Greene and Washington counties. It has also been a challenge to learn to drill cost-effectively, operators say. Gaut’s horizontal lateral was 5,840 feet, relatively small for today’s drilling, but it cost $27 million. That compares to under $10 million for a typical Marcellus well.

“The big question became costs and the ability to execute on a well that would be able to compete on an economic basis with the Marcellus,” Doyle said. “Some of these wells were unbelievably expensive. They were very difficult to drill.”

Fitzpatrick believes the keys are understanding the asset and then making sure the costs keep going down.

“Is the resource there in the deep Utica? Absolutely,” he said. “These wells have been stellar.”

Doyle said drillers need to know not only whether the deep Utica wells are successful, but also that success is repeatable and, over time, less expensive.

What are the keys to success and the outlook for the Utica? For that, you need to read the whole story. It requires a PBT subscription, which we highly recommend.

Editor’s Note: While Jim’s focus here is Southwest Pennsylvania and the highly encouraging news from CNX, we remind our readers that Shell has also been drilling successful Utica shale wells in the Northern Tier, right on the New York border. The Utica is big and it’s real. It underlies most of the Marcellus and also extends into parts of Canada. It’s the next big thing.

5 thoughts on “The Rise of the Utica Shale in Pennsylvania! Is It the Future?”