Shutting down debate is no way to convince anyone, but Apple has killed Greg Wrightstone’s very successful Inconvenient Facts App. Was it to please Al Gore?

On April 29, 2019, Pennsylvania Governor Tom Wolf released the latest version of the Pennsylvania Department of Environmental Protection’s (DEP) Climate Action Plan, announcing that Pennsylvania would join the U.S. Climate Alliance, a coalition of 24 states committed to implementing policies that support the Paris Agreement — an international collaboration from which the U.S. has withdrawn.

According to the governor, “states like Pennsylvania must take action to reduce greenhouse gas emissions and protect our communities, economies, infrastructures, and environments from the risks of a warming climate.”

The plan’s primary objective is to reduce greenhouse gas emissions (GHG) by 80% by 2050 in the Keystone State to reduce the temperature of the Earth’s atmosphere and keep future increases to less than 2 degrees Celsius.

Described in the 231-page plan are more than 100 actions intended to reduce GHG emissions, 15 of which are analyzed in detail. Each action involves increased taxation, increased regulation, increased spending or restrictions on citizens’ freedoms.

Some very relevant questions should be answered by the governor and the PA DEP concerning this far-reaching plan that will necessarily have significant negative impacts on the Commonwealth’s citizens and businesses:

Amount of Temperature Reduction Achieved by the Plan

The overarching goal of the proposal is to lower the Earth’s temperature by reducing greenhouse gas emissions in Pennsylvania. However, nowhere does this hefty document estimate a reduction of temperature. 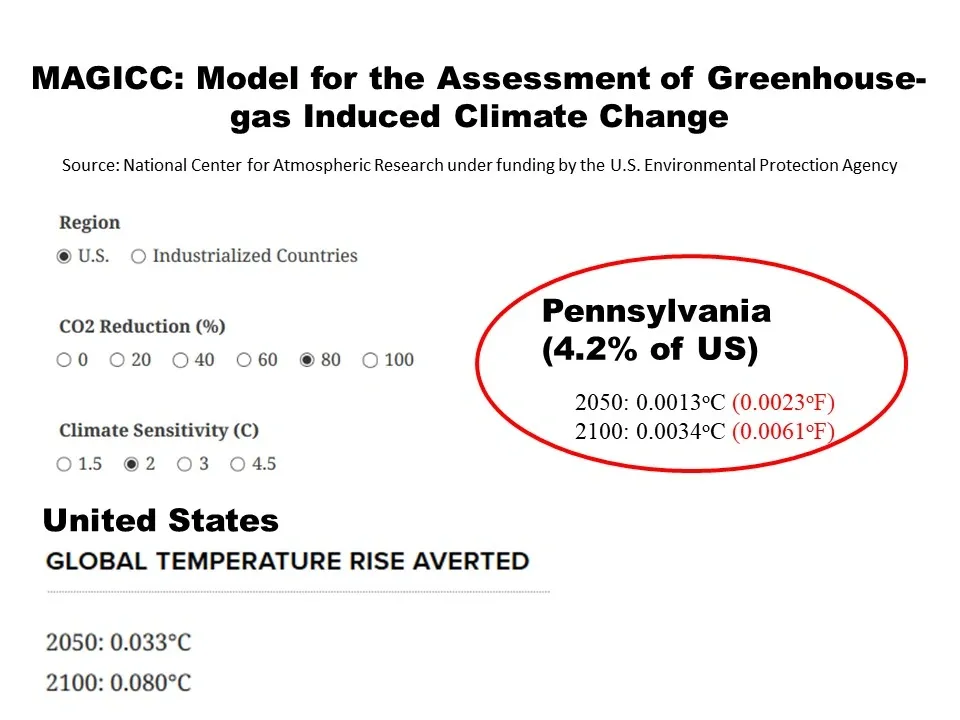 Calculation of temperature rise averted by reduction of CO2 in Pennsylvania

To obtain an estimate, we used the MAGICC simulator (Model for the Assessment of Greenhouse-gas Induced Climate Change) that was developed by scientists at the National Center for Atmospheric Research under funding from the U.S. Environmental Protection Agency (EPA). The model estimates how much temperature rise would be averted globally by various reductions of CO2 for the United States.

Calculations using this (Figure 1) assume an 80% reduction in CO2 emissions, a climate sensitivity of 2.0 and the latest estimate of Pennsylvania’s share of U.S. emissions (4.2%) to reveal the following theoretical reductions:

This extremely small effect should be a very important component in the discussions on whether to impose the significant burdens of the Climate Action Plan on the state and its citizens.

Justification for the Plan

Listed on page 14 of the plan is a section titled “Why Does Pennsylvania Need a Climate Action Plan?” It lays out justifications for why the plan is needed, listing 10 climate impacts that were “already occurring and put Pennsylvanians and local industries at risk.” Many of the impacts it described as occurring are, in fact, not happening and in some cases are improving the state’s ecosystems.

We will look at only a few of the most egregious examples of misinformation due to space restrictions, but these should serve to illustrate that this document is more of a political tool than science-based justification for action. 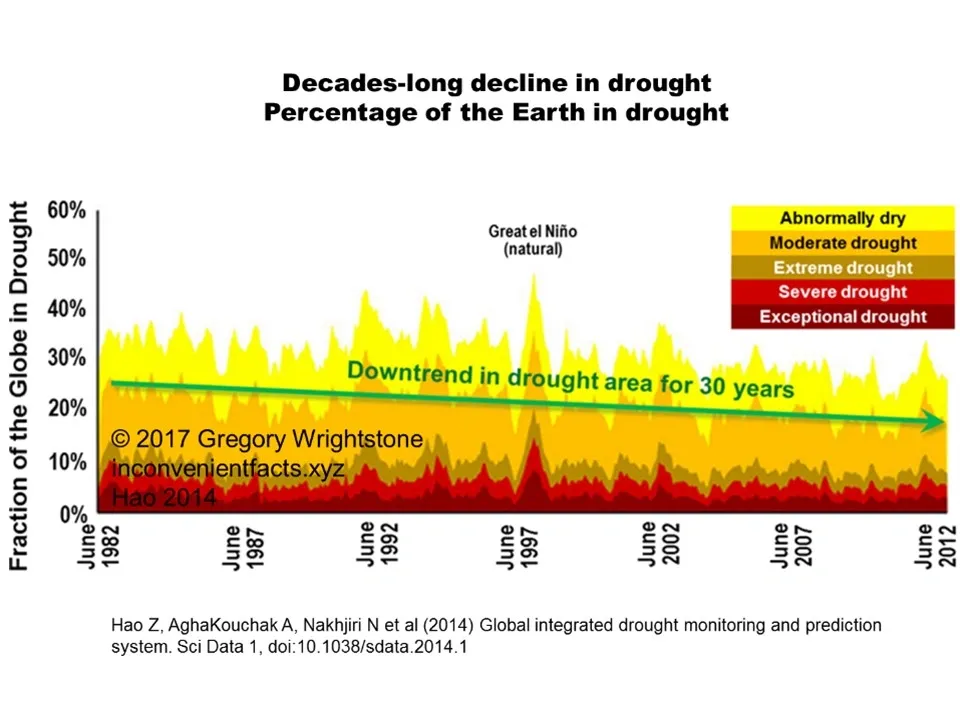 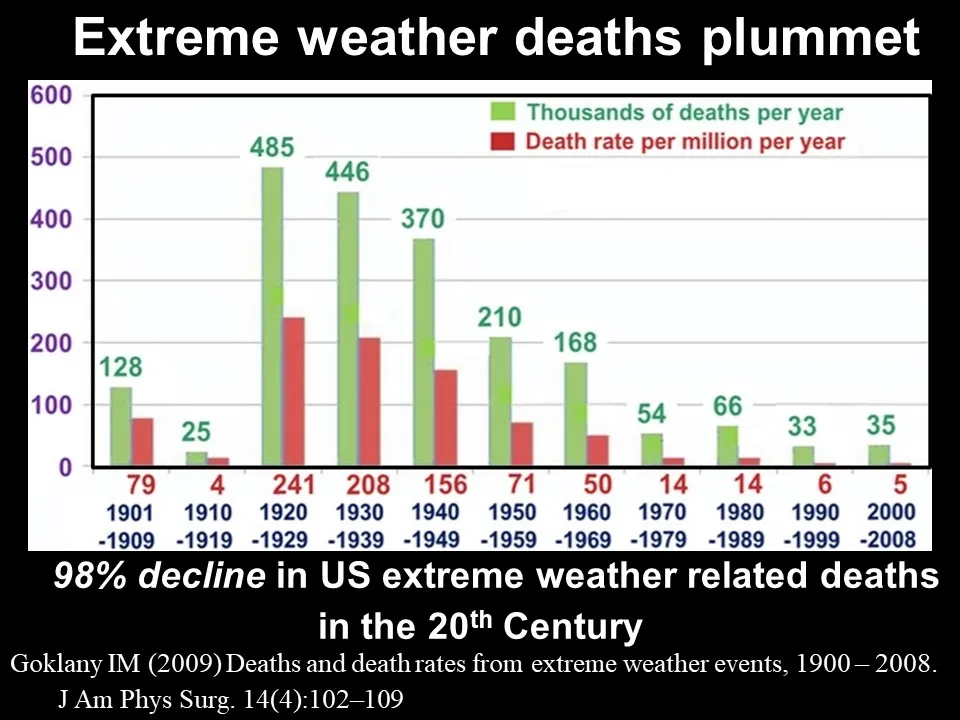 The five (5) primary pollutants measured by the EPA have declined between 25% to 88% since 1990 and continue to improve. 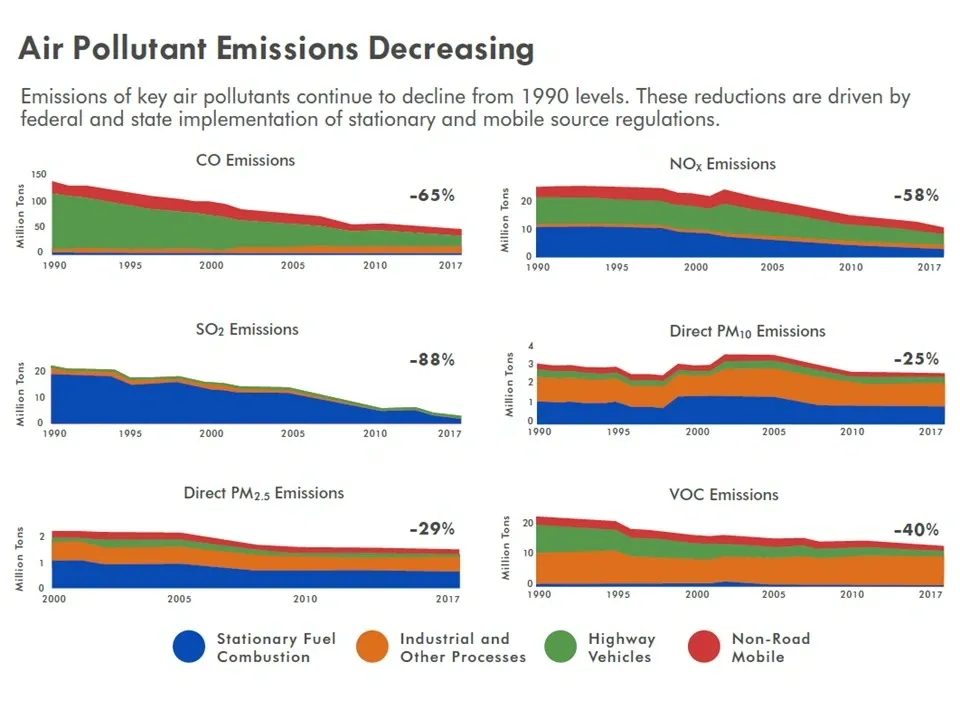 There is no mention of the reduced energy demand during the winter months.

Most of what was listed as justification for implementation of this far-reaching plan were projections of what may or may not occur many decades in the future. These projections are based on climate models that over-predict warming by 2.5 to 3 times too much. It is important to separate speculation of what may occur in the future based on failed climate models from the actual events that can be empirically observed.

The Plan identified 15 actions that were most impactful for reducing GHG emissions and would require increased taxation, spending and government control, some of which are listed below.

In the Energy sector, the Plan would:

And, as for Transportation, the Plan would:

Please note the repeated use of the terms “invest” and “incentivize” as code for spending more taxpayer dollars. Additionally, the Cap & Trade program that is proposed will be a huge revenue generation scheme that would draw large sums of money into Harrisburg for redistribution to favored programs.

Pennsylvania’s citizens would not only be burdened by new direct taxation, but additional costs of regulation and higher energy costs would be passed on to customers. While the plan offers no estimates of costs, they surely would run into the millions if not billions of dollars.

According to the Plan itself, the 15 action items would only reduce the state’s GHG emissions by 21%, far less than the 80% targeted. In order to reach the higher targeted goals, ever more onerous and economically crippling actions would be required.

Pennsylvania’s Climate Action Plan will impose huge costs on the Commonwealth’s citizens and businesses while burdening them with additional levels of restrictions and regulations.

Companies will pass these higher costs on to consumers or absorb the costs, which will deter hiring and new investment. A rise in prices means that consumers will buy less, and companies will drop employees, close entirely, or move to other states where the cost of doing business is lower. The consequence means fewer opportunities for Pennsylvania’s workers, less economic growth, lower incomes, and higher unemployment.

The justifications for imposing this plan are flawed, the costs and regulations are economically crippling, and the result is a temperature reduction so low that it is indistinguishable from zero.

In short, the plan would infringe on the freedoms of people and make them significantly poorer. This plan should be opposed vehemently by the GOP-led House and Senate.

Editor’s Note: .Why is Governor Wolf pursing this feel good strategy, which will produce little or nothing of value and cost all Pennsylvanians so much? The Commonwealth already has an effective climate strategy. It’s called natural gas development, it costs nothing, it produces all kinds of economic benefits and it has done more to reduce CO2 emissions than anything else. What’s not like if you’re concerned about global warming?