Fractivists have long exploited faux “peer reviews” to justify junk science and now they’ve been caught with their pants down on “no conflict of interest.”

Our friends at Energy In Depth (EID) have scored with a huge expose of what is common practice among fractivists: their outright deceit regarding who’s behind their junk science. They have long manipulated the “peer review” process to cast undeserved credibility on themselves and have repeatedly and falsely declared “no conflict of interest” when they are more conflicted than a cat guarding a bird cage. 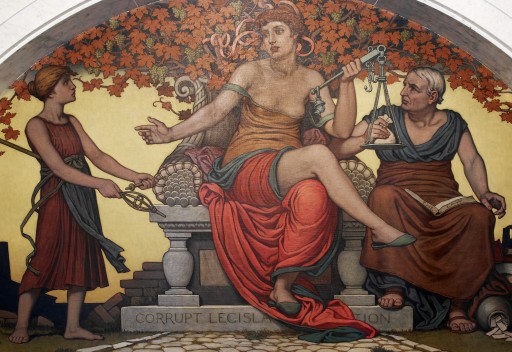 You can read all about what EID uncovered here. It has to do with that story that got a lot of play about some supposed potential pollution of water supplies in Bradford County, Pennsylvania. The study proves no such thing, as EID illustrated in separate post, but that’s not the big story. No, what’s far more illustrative of the deceit that characterizes so much of fractivist junk science is the fact the authors not only failed to reveal their conflicts of interest, but actually disclaimed any by saying this:

“The authors declare no conflict of interest.”

Well, actually, that’s what they said before they were caught. It turns out they did have conflicts of interest now revealed in an updated version of the report, which says:

Well, how about that? The Associated Press has revised its story about the report to reflect this new disclosure but the New York Times, USA Today, International Business Times, and Bloomberg have yet to follow suit and I’m not holding my breath waiting. If they do, it will, of course, be an after the fact admission, long after the headline writers who exaggerated the story have done their damage, but that’s “journalism” such as it is in the era of news outlets who desire to make the story rather than cover it.

Notwithstanding this, AP did the right thing in offering this:

“In a story May 4, The Associated Press reported on research that found drilling fluids likely leaked into a drinking water supply in Pennsylvania. The story should have noted that one of the study’s authors, Garth T. Llewellyn, was a consultant for affected homeowners who sued the driller. That information was not included on a pre-publication version of the study provided to reporters by the journal Proceedings of the National Academy of Sciences, but it was later added to the published version.” (emphasis added)

The AP was honest enough to correct the record and we should be thankful, because this “no conflict of interest” scam isn’t limited to the Bradford County study. I sat on a panel with Tony Ingraffea at Cornell University two years ago at which he made a similar statement, despite being funded by the Park Foundation, for example, which has made no secret of its anti-fracking political advocacy. Indeed, check out this Ingraffea study entitled “Assessment and risk analysis of casing and cement impairment in oil and gas wells in Pennsylvania, 2000–2012” where we see the same statement yet again: 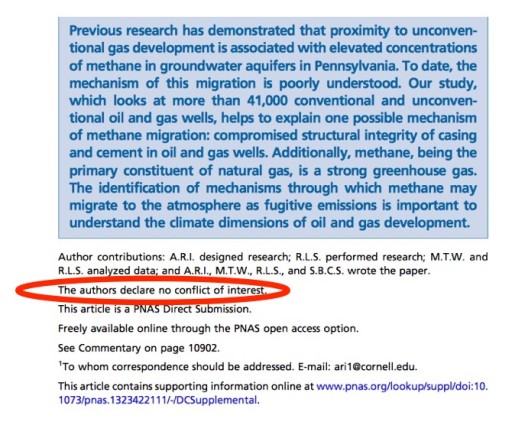 Yet, Ingraffea’s Physicians Scientists & Engineers for Healthy Energy was funded by the anti-development Park Foundation to the tune of $50,000 in 2013, the year the report was prepared. It received $40,000 the year before (funneled through the Sustainable Markets Foundation) and $60,000 last year. The Sustainable Markets Foundation, of course, is run by Jay Halfon, the trial lawyer rainmaker, Park board member and Rockefeller Rasputin, so what we see here is a repeat pattern; trial lawyers and the special interests gin up the studies, empathetic media types promote them and fractivist groups deploy them as tools in the fracking wars.

It happens over and over again, in fact, but this time our friends at EID have exposed it and AP, to their credit, has noticed. Let’s hope we see a lot more of this. Look for those “no conflict of interest” statements and challenge them. Fractivists lie.

3 thoughts on “The “No Conflict of Interest” Fractivist Scam”