The Northeastern Pennsylvania, or NEPA, energy industry is growing economic opportunities and creating jobs if severance taxes don’t kill them.

Continuing on with May 14’s energy forum held at Keystone College, which was led by the Speaker of the Pennsylvania House of Representatives Mike Turzai, the second panel of the conference focused on Supply Chain and Manufacturing.

Up to this point, in case you missed it, the first panel of the forum consisted of companies in the compressed natural gas and natural gas vehicle industries. Representatives spoke in detail about how natural gas as a vehicle fuel has grown, how far its development still has to go, and how Pennsylvania legislators can help develop this cleaner alternative.

The overall purpose of the forum was to address the growth and development of the natural gas industry in Pennsylvania and how Governor Tom Wolf’s proposed severance tax would impact it.

The second panel was comprised of Jim Teeple of Weiler Corporation, Bob Housel of Masters Concrete, Adam Diaz of The Diaz Companies, Jay Cleveland of Cleveland Brothers and Alex Fried of Procter and Gamble (P&G). 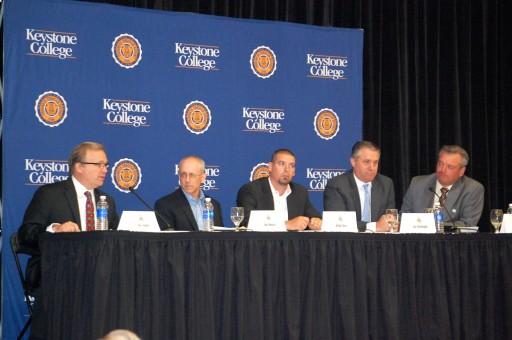 Teeple broke down what he considered the makeup of a community: industry, business support services and social services and their relationships between each other that creates a successful community.

“As a manufacturing guy, industry for me is at the top, and that’s for a reason,” he said. “A community must create value or fundamentally change something to a higher state of units to create wealth, which in turn creates funds to begin the cycle of growth. Without that value, it’s very difficult for a community to grow and be vibrant. Those other two elements, business support services and social services, such as banking services, retail or hospitality, they really depend on whether or not outside dollars are coming into a community.

“It’s up to us to get out and speak to each other and let people know what the advantages are for a community for something as natural a treasure like natural gas is to the Commonwealth of Pennsylvania,” Teeple said.

Teeple went on to cite examples of how his company has been able to increase the value of communities, such as buying the wire used for their industrial brushes, the boxes they’re packed in and the stamping all coming from different Pennsylvania businesses.

“It’s not just about the gas that’s coming out of the ground and it’s not just about using it as a fuel,” he said. “It’s about an entire economy and community and how we can grow. The question is how can we take gas from the Marcellus Shale and use that as an advantage to us to be able to grow jobs and in turn grow the community.”

Housel touched on Masters Concrete’s history, how it was started in 1932 by his grandfather and has since provided concrete to his local community for decades since. He stated that from the mid-1980s to the late 1990s, there was virtually no measurable growth within his local industry. Once the millennium turned, Masters saw an increase in business of approximately 25 percent over the next six years. When the Great Recession hit, Housel said that business plummeted to levels they hadn’t seen since the 1970s.

“Things were very bleak for us,” he said. “We were forced to downsize our workforce dramatically, as well as cut wages of those still employed. But on March 1, 2008, a small and seemingly insignificant event happened. We sold two cubic yards of concrete to a company called GasSearch Drilling Services. We had no idea what that meant or what it would lead to.

“Our business still remained slow, however, and bottomed out in 2009, but we sensed optimism based on the slowly growing work that was beginning in the Marcellus Shale,” Housel continued “Our hopes were quickly realized as we saw unprecedented growth over the next few years and, in 2013, our sales were 115 percent greater than they were in 2009. We added 25 well-paying jobs to our payroll and we raised wages significantly to keep pace with the gas industry, which was vying for well-qualified workers in the area.” Masters was also able to upgrade and replace aging vehicles and equipment, according to Housel.

“Since the Marcellus has begun, our little company has spent $10 million with cement manufacturers in the Lehigh Valley,” he said. “Now I want to remind you as you sit here at this table that there’s a lot of people here that represent much bigger companies; we are by far the smallest fish in the pond here today.”

“For those who doubt that the companies that explore for gas in Pennsylvania will leave if a severance tax is enacted, I have news for you: many of them have already gone,” he said. “We’re optimistic that they’ll come back, but at present, things don’t look so great.

“In November of last year, we saw a sudden drop-off in business, particularly in gas-related work,” Housel continued. “It’s just like someone threw a light switch, and I’ll let you connect the dot.”

Year to date, Masters’ volume is down 58 percent, he said, forcing the company to lay off 22 employees, reduced hours and froze wages.

However, Housel also touched how he has seen the impact fee help the area, noting that Susquehanna County has been able to call Masters to fix the region’s aging bridges because of the fee. He said the county hasn’t called Masters to do concrete work for years, until now. Fire departments and ambulance crews, he added, have made additions to their facilities and the biggest boost has come from local townships.

“The impact fee works as it was designed to work,” he said.

Diaz gave a brief background of the Diaz Companies, which started as a “daily struggle” in the blue stone industry with about 30 employees and, because of the natural gas industry, has grown to eight corporations and LLCs that employs roughly 250 people across multiple industries, including forestry, waste, manufacturing and stone.

“We’ve been very fortunate,” he said. “The gas companies really took us under their wing. When they first came up here there was a lot of opportunity and we were aggressive in that but we were also conservative to the point where we never knew how this industry was going to turn on or off.

“We’ve been following the severance tax very closely and the other environmental and regulatory issues that the industry is facing,” Diaz continued. “You can’t be upset or frustrated that a lot of the companies have moved out of the area for fear of a severance tax or other issues that are affecting them. They have a balance sheet and a business to run as well, and it’s our responsibility to manage our business.”

Diaz noted that the Diaz Companies have been more fortunate in this area as the business has expanded to reach other industries and isn’t quite as reliant on natural gas, but he’s extremely worried on what the severance tax would do to his local community, and the passion for his community showed.

“If the gas industry pulls up and leaves because of a severance tax, will the community still see donors donate, is the hospital going to able to build a Phase 3, are the roads going to be improved, are the Little Leagues going to be able to get the sand for their fields that the townships are able to help purchase, are my employees going to able to pay for their vehicles; that’s what is scary to me,” Diaz said. “It would be a damn shame to my 250 people if the economy goes backwards again and the gas industry moves out.” 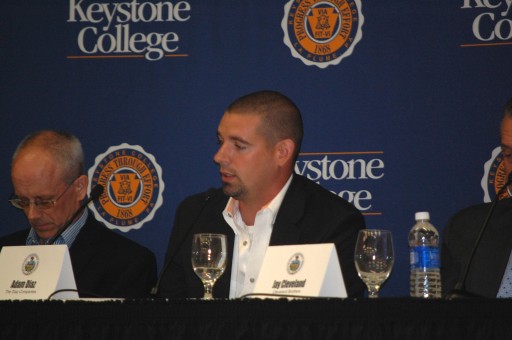 Cleveland also had a similar growth story. After cutting approximately a third of its work force due to the recession, the Cleveland Brothers became involved with the gas industry in 2010 and started servicing the Caterpillar engines for the gas industry, which progressed into hydraulic fracturing and then led to pipeline opportunities.

“Because of the gas industry, we have close to $200 million invested today, and we’re looking to add to that,” he said. “But if we talk about the industry getting taxed and leaving, I assure you that that investment will go down; there is no doubt in my mind.”

Cleveland added the impact fee has had a positive affect on his company and local communities as well, from equipment being purchases to roads being constructed and maintained. He also noted that there remains a need for training potential new employees.

“A lot still needs to happen in the trades around the oil and gas business,” he said. “This is a different industry, and we have to adapt to that and train people to want to be in that business.”

P&G has had a facility in Mehoopany for nearly 50 years, specializing in producing brands such as Pampers, Bounty and Tide, according to Fried.

“P&G is number one in our industry for energy consumption,” he said. “Since the days of our start-up, we have used natural gas, so it’s not new to us. What is new to us is that we have natural gas right below our feet at our facility. So what we used to do is buy our natural gas from the Gulf of Mexico, pay to have it transported 1,500 miles to our facility.”

“You don’t need to be a PhD economist to say a resource that you used to pay to have transported 1,500 miles you now have under your feet on the property of your neighbors is obviously much cheaper,” he said. “And coincidentally, our Mehoopany facility is our most energy-intensive facility out of 138 total.”

Fried went on to say that the wells eventually eliminated the need to purchase gas and actually allowed them to reverse the gas line connected to the facility and pump gas back out into the market. P&G went from buying 50,000 homes worth of electricity a day, to making that amount on site and selling an additional 10,000 to 20,000 homes worth of electricity per day. Fried also noted that P&G has been engaged in transitioning its vehicles to run on natural gas, and has reached the point where the state and federal fuel taxes exceed the cost of the fuel, itself. 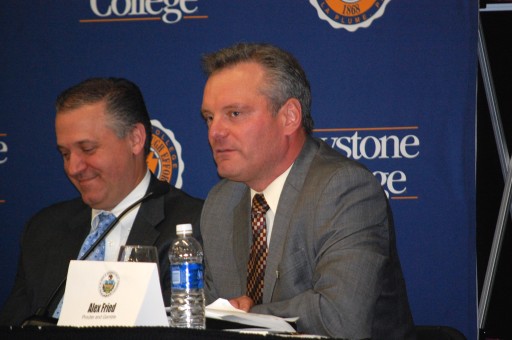 “(Pennsylvania) has a very good card to play to keep manufacturing here and to attract new manufacturing,” he said. “But this is only one player on the whole team. So we need to keep all the other aspects in mind, like training good employees, reasonable and sensible regulations and a good cost and tax structure; those are all important.”

3 thoughts on “The NEPA Energy Industry Is Growing Opportunity: Part 2 of 3”