The Green New Deal, which presupposes a mere decade to turn the world upside down, is countered by a new report appropriately titled “Transition to Reality.”

The Global Warming Policy Foundation (GWPF) has just issued a very revealing report that contradicts just about every aspect of the Green New Deal, even though it doesn’t mention it. The report nicely articulates some of myriad reasons the whole is a “grand delusion.” I also ran across what is, in my mind, an even better description of the thinking behind the vague Green New Deal; the fact it is no more than an exercise in “inhumane abstraction,” the inhumane part being about the impact of such an upheaval if anyone seriously attempted to implement the deal.

As we have already demonstrated here and many, many others have pointed out with great effect, the Green New Deal is nothing more than a set aspirations set forth by unscientific, inexperienced true believers who imagine merely asserting something makes it practical or true.

Some, aren’t really true believers in the deal, of course. Rather, they’re true believers in a political system they supposer would give them power and they see the deal as a means to that end. Either way, there is nothing but disaster ahead if their foggy notions were to seriously entertained. Therefore, they must be seriously examined and that’s what “Transition to Reality” does. Here are some of the conclusions (spelling adjusted for American readers and emphasis added):

Much of the current public discussion concerning future energy transitions is based upon speculation as to the technologies that might be available, their costs, and the rates at which they might be commercialized. Anyone can dream about what the future may hold, but it would seem more prudent to base one’s judgments on what has actually happened in the past.

Based on the history of energy transitions, the period from scientific discovery to widespread commercialization is much longer than is currently estimated by the advocates of rapid decarbonization. Depending on the technology, the process may take between 30 and 50 years, or much longer where widespread commercialization depends upon the replacement of long-lived infrastructure.

None of the steps in the innovation pathway – research, discovery, testing, demonstration, initial market development or widespread commercialization – operates according to a fixed or predictable schedule. Governments that seek to impose their policy preferences on the outcomes will face perhaps insurmountable obstacles…

Installing in 10 years wind and solar-generating capacity more than twice as large as that of all fossil-fueled stations operating today while concurrently incurring write-off and building costs on the order of $4-5 trillion and reducing regulatory approval of generation and transmission megaprojects from many years to mere months would be neither achievable nor affordable at the best of times. At a time when the nation has been adding to its massive national debt at a rate approaching $2 trillion a year, it is nothing but a grand delusion.

That certainly sounds correct to me. None of the folks who propose rapid replacement of all fossil fuels and ignore the potential and record of natural gas in achieving the same ultimate objective have bothered to consider the economics or the impacts on ordinary people. They simply haven’t cared because their mission is a religious one in nature where earthly concerns are nothing more than a distraction to be avoided.

One chart, built from EIA data, is particularly effective in showing the reality: 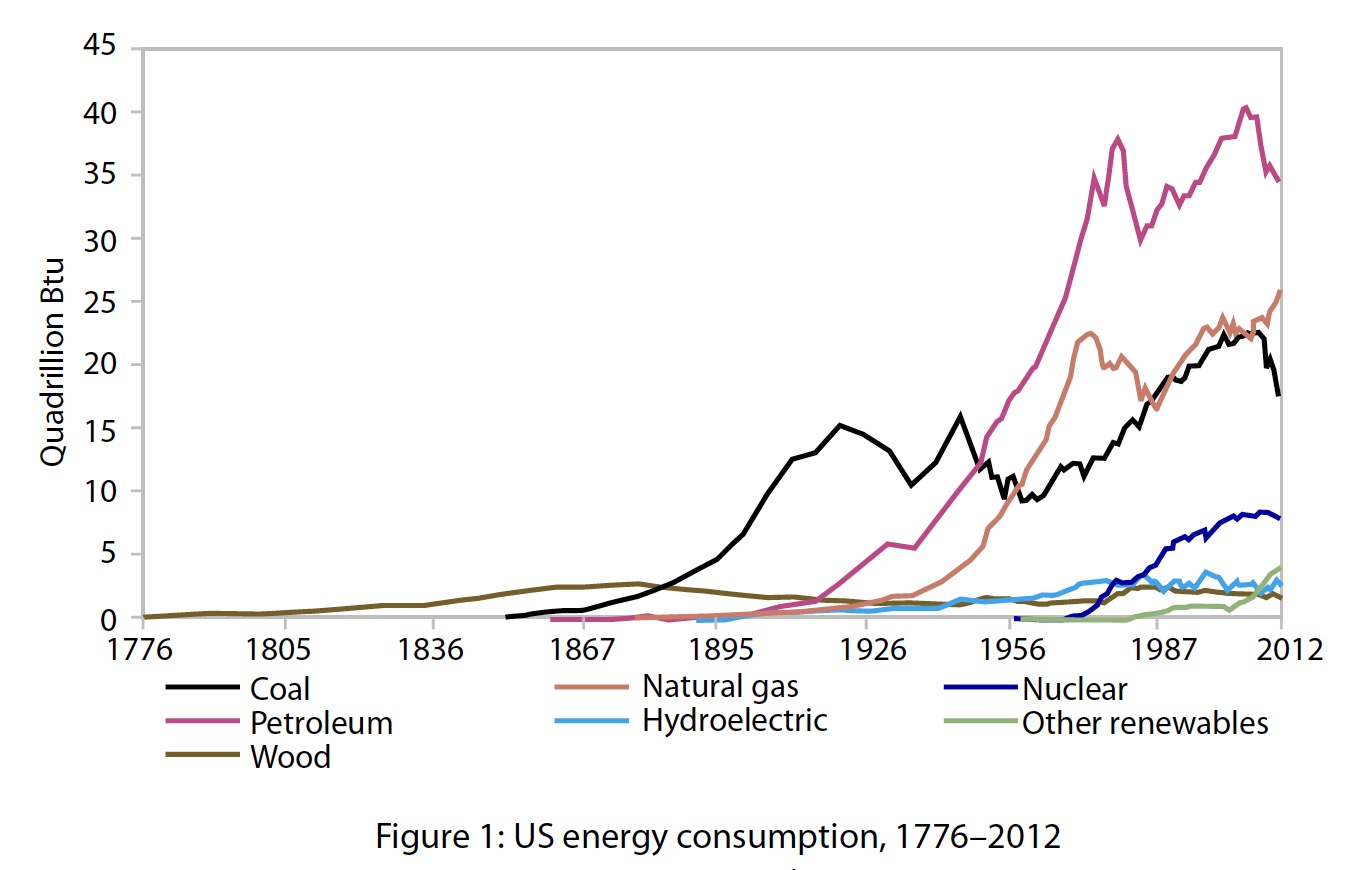 Notice the immense role of fossil fuels (85.2%) compared to non-hydro renewables (3.6%) today  Fossil fuels provide almost 24 times the amount delivered by non-hydro renewables. Reversing on political schedules is not going to happen. Moreover, also notice that, over the long-term, no energy source really declines as to the amount of use. They only decline in relative importance as new sources come onto the scene to grab some part of the future market.

Considering these two factors alone it becomes more than obvious renewables are never, ever going to truly replace fossil fuels. They might well, if forced to become competitive by the withdrawal of subsidies, eventually capture the largest share of the market but that’s going to take a very long-time because gas, in particular, is not going away and gas is both cheap and clean and getting cleaner all the time. We are, too, more likely to find ways to sequester or use the carbon produced in the near term than we are to find ways to make solar and wind truly practical. If that happens, solar and wind will not really progress significantly at all.

But, there’s also the sheer impracticality of doing large scale solar and wind. Not only are they politically difficult to sell to neighbors who get no real direct benefits, but they are simply horribly inefficient with respect to land use and the ability to deliver whatever power they produce to where it’s really needed. Consider these details:

In order to energize the residential, industrial, and transportation infrastructures inherited from the fossil fuel era, a solar-based society would have to concentrate diffuse flows to bridge power density gaps of two to three orders of magnitude. Mass adoption of renewable energies would thus necessitate a fundamental reshaping of modern energy infrastructure, from a system dominated by global diffusion of concentrated energies from a relatively limited number of nodes (i.e. sites) extracting fuels with very high power densities to a system that would collect fuels of low energy density at low power densities over extensive areas and concentrate them in the increasingly more populous urban centers.

In the United States, on average 15GW of generating capacity were added every 20 years from 1987 to 2007. To make a transition to renewables by 2030, 150 GW would need to be added a year, and the longer the wait to do this the more would need to be added later on, perhaps 200–250 GW or 20 times as much as the record rate of 2008 (8.5GW added wind capacity). This should suffice to demonstrate the impossibility of doing so. On top of this, the impossible feat would require writing off in a decade the entire fossil-fueled electricity generation industry and the associated production and transportation infrastructure, an enterprise whose replacement value is at least $2 trillion.

The wind would have to come from the Great Plains and the solar from the southwest, yet no major HV transmission lines link to East and West coast load centers. So, before you could build millions of wind turbines and solar PV panels, you would need to rewire the United States first with high-capacity, long-distance transmission links, at least 65,000 km (40,000 miles) in addition to the existing 265,000 km(165,000 miles) of HV lines. These lines cost at least $2 million/km.

The devil in these details couldn’t be less hidden, could it? When you transistion from inhumane abstraction and self-delusion to reality, it can hurt but a whole lot less than actually attempting to tilt at those windmills that make up the Green New Deal.

6 thoughts on “The Green New Deal: A Grand Delusion and Inhumane Abstraction”