Incoherent government is creating an energy dilemma everywhere we look; New York, Pennsylvania and internationally. Happily, shale succeeds in spite of it.

Over 110 days after the legally-mandated “deadline” for approving a new State budget, the pressure is building on Pennsylvania’s legislature and Governor finally to get serious and stop the gamesmanship. Schools, foster care facilities and many other state agencies and programs are running out of money. Many are seeking short-term loans to get by, but others are not easily financeable.

Meanwhile, Governor Tom Wolf and the Republican-dominated legislature continue to play chicken over the mineral extraction tax issue. While the proposed extraction tax is not the only contentious issue (privatization of state liquor stores and pension reform being among the others), the tax has been the public focal point. As so often happens, each sides’ absolutist position likely will wilt as more state institutions, teachers, contractors and others don’t get paid. Sadly, real discussion on the issues could have been handled months ago. Unfortunately, a neophyte Governor and a recalcitrant legislature have shown little ability to work for the betterment of the State.  Let’s hope that changes as the winter approaches.

As we move into November, the New York Department of Environmental Conservation continues to withhold its 401 Water Quality Permit to allow the Constitution Pipeline to get built. This will impact the availability of New Englanders to get gas from the Marcellus, instead of Yemen. People in New England had better prepare for a long, cold and unnecessarily expensive winter.

Interestingly, last week the Governors of Pennsylvania, Ohio and West Virginia announced a three-year agreement to collaborate on areas critical to shale marketing, strengthening workplace development programs, investing in infrastructure and the midstream transport and delivery of natural gas. It remains to be seen if this is a true attempt by the Wolf Administration to develop the Marcellus and Utica coherently or a ploy to try to force his administrative agenda and regulations onto the neighboring states. Still, on balance it looks like a positive step.

While the Cooperation Agreement may portend the beginning of a positive Wolf Administration policy on shale, the federal administration continues to be incoherent. This came into further focus with the Iranian Majlis’s rejection of the six-party nuclear deal. Despite being reported erroneously in the press as an approval, the Iranian Parliament actually unilaterally amended the previously negotiated international Agreement to make the provisions more in the Iranians’ favor, then voted to approve their unilateral bill.

Clearly, the Iranians did not expect any public pushback from the Obama Administration, and none was forthcoming. As Iran prepares to dump its oil on a saturated world market, the United States continues to ban any export of oil and delay permitting for export of natural gas. With Russian President Vladimir Putin possibly overextended now in Crimea, Eastern Ukraine and Syria, ISIS generating its revenue from oil, whole areas of our own country not able to access the gas or oil produced only hours away, it would seem a national policy reevaluation might be wise. Don’t expect one.

Domestically, the battle of the scientific studies continues. A Yale University report recently concluded that hydraulic fracturing does not contaminate ground water. In its press release, the authors stated that…

With so much “scientific” analysis being done, and all sides able to claim their view is based on science, one wonders why only hydraulic fracturing seems to be under such scrutiny? Shouldn’t all industry, including all manufacturing and all “cleantec” production, be subjected to the level of analysis being done on fracking? All energy sources, including renewables, have their own environmental downsides. They should all be studied so as a nation we can make an informed choice about our future energy mix. 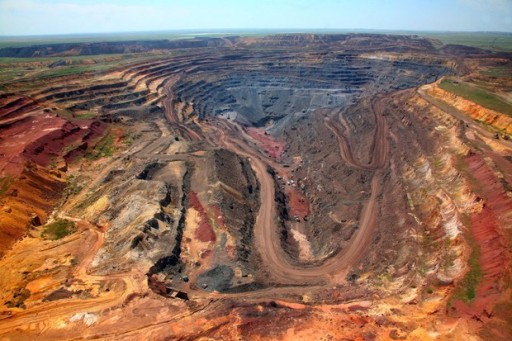 Chinese rare earth metals mine where minerals such as used in solar and wind technology are mined.