DRBC claims about the Delaware River providing water for 15-17 million people are more exaggerated than the claims of Mark Twain’s death before the real event and expose an agenda to keep the Upper Delaware region in perpetual “pastoral poverty.”

The DRBC has been prattling on for several years about about how the Delaware River is the water supply for 15 million people.  That’s its excuse for dismissing any concerns residents of the Upper Delaware might have regarding impacts of its onerous “special protection waters” regulations on the local economy and its failure to permit natural gas development here.

That excuse has been parroted by its pals at the Delaware Riverkeeper, of course, and repeatedly cited in news stories.  The Riverkeeper has recently taken to further exaggerating the claim, taking it to 17 million.  It’s all bogus and these aren’t even the biggest lies.

Here’s what the DRBC says:

Over 15 million people (approximately five percent of the nation’s population) rely on the waters of the Delaware River Basin for drinking, agricultural, and industrial use, but the watershed drains only four-tenths of one percent of the total continental U.S. land area. The 15 million figure includes about seven million people in New York City and northern New Jersey who live outside the basin. New York City gets roughly half its water from three large reservoirs located on tributaries to the Delaware. The Delaware Bay is only a gas tank away for about 23 percent of the people living in the U.S.

Let’s analyze this a bit.  Exactly what does “rely upon the waters of the Delaware River Basin” mean?  Well, we’re never quite told, but we can back into the number from this report, which, on page 4, says the basin has a population of 8.26 million; combined with this one, which, on page 20, indicates the DRBC supplies roughly 800 million gallons daily (MGD) to New York City and another 100 MGD to New Jersey Water Supply Authority (NJWSA) systems supplied by the Delaware and Raritan Canal.

The City system serves roughly 9 million people and the still another report suggests the NJWSA serves 1.5 million residents.  Add them altogether, deduct the overlaps connected with water providers from within the basin, and we get the 15-17 million figures being thrown around by DRBC and the Riverkeeper.

What, precisely, is the point of this statistic?  Surely, it’s not to tell us how many people live in the Delaware River Basin and depend on its water.  That would be like saying there are 314 million people in the U.S. who depend on its water – a big yawn statistic.  No, the point is to say, without saying it so plainly, that some 8-9 million people live outside the watershed and depend upon stealing our water to survive.

It’s a case of rubbing salt in the wounds of Upper Delaware residents and reminding the out-of-basin water thieves of their stake in the matter of the Delaware, where roughly half the water used every day is exported to others.  That’s why this stat is repeatedly used by the DRBC and the Riverkeeper; to appeal to a constituency that will support their imposition of draconian “special protection waters” rules on any development in the upper basin so as to keep the water available for downstream or out-of-basin use.

The casual or more forgiving reader might think the constant mention of the 15+ million is only about reminding everyone how many public water supplies are directly dependent upon the Delaware River as their source, but that isn’t the case.  The DRBC treats any water used as a withdrawal, whether taken directly from the river or from a pipe in the ground.  Surface water withdrawals are considerable but they don’t come anywhere near serving 15 million people.

As noted above, New York City is the biggest water thief by far in this regard, dwarfing all other users, and, combined with what New Jersey takes for out-of-basin use, they together rip off about 900 MGD (enough to frack about 200 gas wells per day by the way). New York City and adjoining communities served by its water system get 50% of their water from Delaware River Basin reservoirs and have a population of roughly 9 million people.

And, there’s the rub; the other 50% comes from elsewhere (Catskill and East of Hudson reservoirs).  This means only 4.5 million Big Apple residents are truly dependent on the Delaware River Basin for their water and not the 8-9 million the DRBC would have us believe. 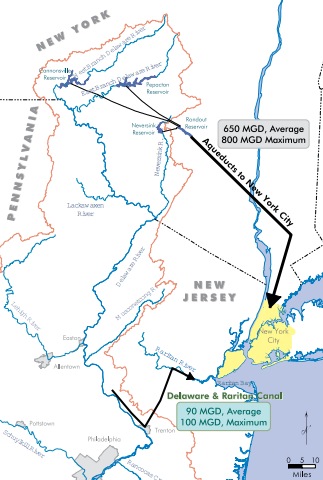 Likewise,  even the wild-eyed Damascus Citizens for Sustainability, in this report, suggests the number of New Jersey residents whose water comes from surface water withdrawals is somewhere in the vicinity of 933,000.  They proceed to bizarrely suggest this, combined with the estimated 1.5 million people using canal water from the Delaware somehow calculates out to 3.15 million New Jersey folks who drink water from the Delaware and, then, for good measure, throw in 4.2 million who drink groundwater recharged by the Delaware.

Even if we give them the 3.15 million, though, that means we’re only at 7.65 million and, if we throw in Pennsylvania and Delaware use, which amounts to roughly 64% of New York and New Jersey use and assume 90% comes from surface water withdrawals, that would add only another 4.2 million, bringing our total to 11.8 million, which is well below the DRBC’s inflated number.

So, the DRBC figure is a big exaggeration, if not a lie.  But, it’s far from the greatest one. A bigger lie is the suggestion natural gas development will somehow threaten these water supplies, even though there is no case of hydraulic fracturing polluting a U.S. ground water supply and no significant cases of natural gas development polluting any public water supply.  The amounts of water used in fracking are extremely small in the big picture and such cases of methane migration and surface spills as have occurred have been both rare and of little impact.

The DRBC and the Riverkeeper, of course, both know this.  What they really want has nothing whatsoever to do with hydraulic fracturing.  Indeed, the proposed DRBC regulations barely address the subject; because it doesn’t need addressing and the states are already so on top of this issue as to render anything the DRBC might do as superfluous and irrelevant.

No, hydraulic fracturing is merely the excuse to gin up fear among the people who have been stealing our water for years and enroll them into a campaign to stop any and all development in the Upper Delaware region.  They aim to whip up a frenzy around what they know is poorly understood, so as to get more “special protection” regulations that will grind everything to halt and keep the region one of “pastoral poverty” that can be purchased on the cheap as a playground for themselves.

There’s also an element of ideological bullying taking place.  No one who has watched Maya van Rossum, the Delaware Riverkeeper, or Carol Collier, the DRBC Executive Director, in action will have a hard time believing these two Facebook friends are anything if not true believers who care more about trees than people.  The pretense that either care about the welfare of the people who actually live in the Upper Delaware region – well that’s the biggest lie of all.

7 thoughts on “The DRBC and Its Really Big Lies: Millions and Millions”