The anti-growth Delaware Riverkeeper, a/k/a the Delaware Povertykeeper, is trying to pre-empt lifting of a DRBC moratorium by financing some junk science.

If one wanted to know how fractivist disinformation is made, it was only necessary to participate in webinar of sorts put on by a group of hired guns known as CNA to introduce the latest and worst piece of fractivist junk science to come down the road. Entitled “The Potential Environmental Impact from Fracking in the Delaware River Basin,” the report is a superficial analysis intended to pre-empt any thought by the Delaware River Basin Commission (DRBC) of lifting its moratorium on drilling now that it’s under new non-ideological leadership. It is a sterling example of how fractivists, and especially their funders, attempt to manipulate the press with what is utter nonsense of zero credibility with anyone not already on their team.

Everything you need to know about this project is found on the acknowledgements page: 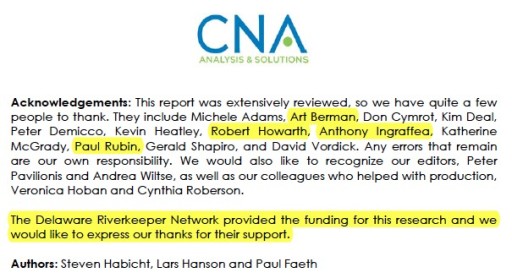 The Delaware Riverkeeper Network, of course, is what we have repeatedly referred to as the “dirty tricks arm of the William Penn Foundation.” They would not exist in their current form without the WPF’s extensive financing and they’re part of a junta of fractivist groups it funds that also includes the Clean Air Council, PennFuture and the like.

The Delaware Riverkeeper is loudest among them, perhaps because it’s the most deaf to the economic concerns of anyone living north of Bucks County. That’s why they’re entitled to another name – the Delaware Povertykeeper – which more accurately describes what they’re all about. They claim to have financed this CNA study (more on that in a moment) and that is the first “danger, danger, danger” alarm bell that should gone off in the minds of journalists as the Delaware Povertykeeper is as mouthy and as biased a source as can be found on the subject of fracking.

The others who we’ve highlighted have equally deep biases and the best credibility meter on this score is a collage of pictures of the highlighted contributors at work: 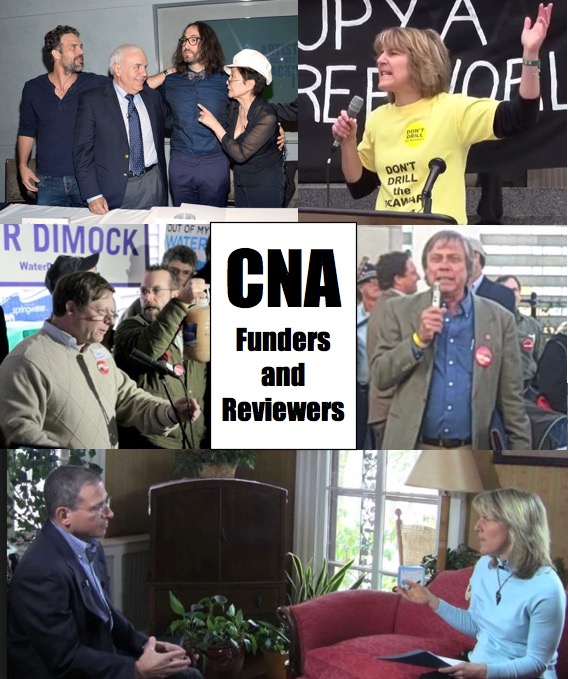 You can search our site for more information on these characters but, suffice it to say, none are the slightest bit objective and their involvement in this junk science production is the ultimate verdict on its credibility, which is zero. Paul Rubin, as an example, is one of the favorite experts employed by the Delaware Povertykeeper. His professional opinion was all but totally rejected by the Pennsylvania Environmental Hearing Board recently and was previously skewered by a New York court.

UPDATE: An alert reader informs me still another of the reviewers was Kevin Heatley, a well-known fractivist who consults with the Google-funded Responsible Drilling Alliance or RDA in Williamsport and whose writings have appeared at Shale Justice.

There are, nonetheless, several other indicators of just how shoddy this work really is, beginning with its projection of as many as 4,000 wells in the Delaware River Basin. That is an absurd figure only made reasonable by even more absurd figures from just three years ago when the Delaware Povertykeeper was hyperventilating about 60,000 wells (emphasis added):

Based on industrial and academic estimates that trillions of cubic feet of natural gas are theoretically recoverable from the formation, over 30,000 and as many as 60,000 natural gas wells are anticipated in the Delaware River Basin alone and the impacts to water quality and quantity, air quality, recreation and the wildlife within and near treasured lands could be severe.

CNA’s estimate, though reasonable by contrast, is still way off the mark. We learn on page 11, for example, it assumed “a 4,000-foot lateral length and 500 feet of spacing between laterals.” It only takes a few seconds on Google to learn every company is extending laterals, some to as much as 10,000 feet, with Range Resources aiming for a 5,200 feet average as of last year and Cabot averaging 5,300 feet. It we use Cabot’s figure and apply a little of the geometry we learned in high school, that means each well pad covers 33% more land with a rectangular well pad layout, reducing earth disturbance in the process. That, in turn, means a 25% reduction in the number of wells. There goes 1,000 wells.

But, that isn’t all. No, the 500 feet average spacing figure is also off. Spacing today can range between 600 and 750 feet. The 600 feet common to all producers in Northeastern Pennsylvania will increase the amount of land from which one well pad can draw gas by another 7% and lower the number of wells by another 160 wells or 4%.

Then, there is the tiny matter of where CNA assumes one can drill. The report theorizes a “dispersed” and a “concentrated” form of well development, the latter being what’s actually taking place with an average of eight wells per pad. This would yield 500 pads under their assumptions (355 in reality).

The “dispersed” model is their social construct of what could happen with four wells per pad. No one is drilling four wells per pad when they can drill eight, of course, because everyone wants to spread the overhead connected with a pad, but putting that aside, guess which model CNA uses to map the impact? The “dispersed” model, of course, because it disturbs far more land, requires far more infrastructure and covers the map. Here is the map they use for the upper basin as a whole (poor quality in the original): 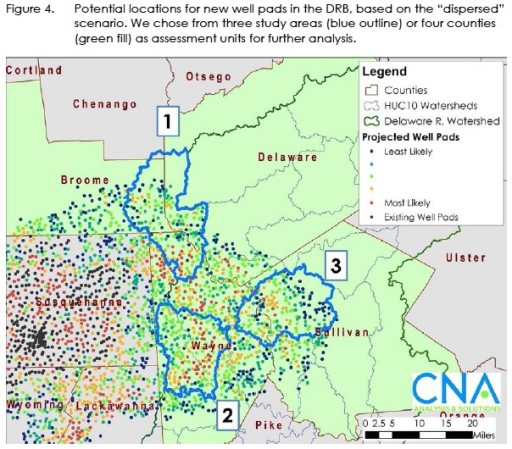 CNA’s analysis for this option yields 3,900 wells, not 4,000, but look at the coding and the suggested location of those well pads. The “least likely” and “existing well pads” are both coded with dark colors, which tends to lead the casual observer to think the Upper Delaware pattern of development will be similar to the Susquehanna basin where drilling is occurring, but there are no existing well pads in the Upper Delaware basin and the number of “most likely” pads is a small fraction of the total. It appears, in fact, only 65 of the 500  suggested pads are “most likely.” This would yield 500+ wells.

Moreover, the map shows “most likely” and other pads in highly unlikely locations extending into southern Wayne County, as well along the Moosic Mountain syncline, where no interest has been shown by gas companies.

The entire 4,000 well scenario is based on a foundation of sand, if you will, and sand doesn’t yield shale gas. The real number of likely pads and wells, is less than half of what CNA has projected.

And, that’s hardly all they got wrong. Consider the following:

That gives some idea of the problems with CNA’s report. It lacks any substance but, more than that, it’s paid for the Delaware Povertykeeper, which gets its money from the William Penn Foundation. The WPF recently also funded another $320,000 grant to CNA for the following (emphasis added):

Develop and test, with partners, a new Delaware River Basin-scale model to quantify the impact of land management practices in this large, complex watershed.

I asked about this during the webinar presentation and was told it is a separate grant relating to multiple water quality initiatives in which CNA is engaged with WPF. What does that mean? I’m not sure, but I’m very troubled by two things; a) who the partners are, and b) the similarity of this language with that found in the DRBC’s description of the grant it secured from WPF for its such effort. Is the Delaware Povertykeeper a partner? Well, obviously yes, but it would be nice to see it specifically admitted.

Or, is the DRBC the partner? The grant WPF gave the DRBC was supposedly “toward building Its capacity to assess, manage and mitigate impacts to water resources due to land changes related to natural gas development activities.” That suggests the answer could be yes, which is highly disturbing given all that the WPF does to undermine natural gas development. Regardless, it’s an absolute scandal that DRBC went to the WPF for money from the very organization funding Delaware Povertykeeper lawsuits against it.

That scandal happened under the leadership of the DRBC’s former Executive Director, not its current one, of course, and I don’t intend to suggest otherwise. Carol Collier has gone off to her reward with a job at another William Penn Foundation (WPF) subsidiary, which further exacerbates the situation looking back and at what’s happening here. The WPF is looking to influence the DRBC in another way now with this CNA junk science report. It’s pathetic on one level, yet serious questions remain as to what’s going on here. Is the $320,000 grant to CNA connected with the one to the DRBC, or is it more of what we see with this report?

Either way it demonstrates the undue influence of the WPF and other groups like it. They’re manufacturing the news based on utter crap for research. Meanwhile, Carol Collier got her seat on the William Penn Foundation board, although the organization doesn’t seem keen on admitting it. Perhaps they’re embarrassed, just as they should be with this awful report? Nah…nothing embarrasses them before the little people of the upper Delaware River region who they’re keeping in poverty.