California is always ahead of other states — in pursuing dumb ideas. It has been practicing a Green New Deal approach to energy for years with awful results.

The Green New Deal has been underway in California for some time now, yielding market distortions, high electric rates and impossible tax burdens. It is also failing miserably with respect to its underlying objective; reducing emissions. The reasons are hard to explain, yet states such as New Jersey and New York seem determined to emulate the California Green new Deal foolishness.

Here’s what I mean by the failure to meet goal: 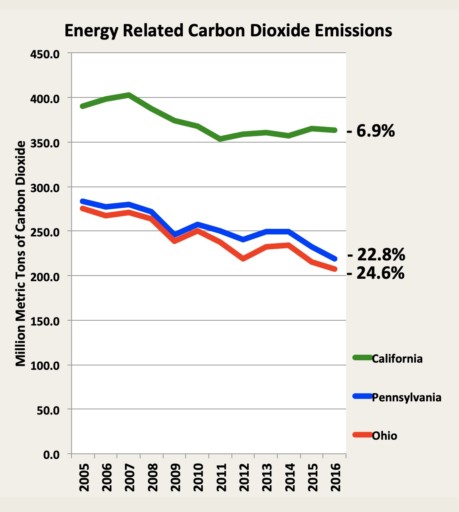 Notice that Pennsylvania and Ohio, the heart of the Appalachian Shale Basin, where the glorious shale permitted access to inexpensive clean natural gas to replace coal achieved CO2 reductions of more than three times those of California with its green new deal. Moreover, both states achieved absolute CO2 emissions of roughly 2.5 times California. And, that was starting out with emissions that were only about 70% of California’s.

The state that wants to imagine itself as the leader doesn’t even come close to Appalachian shale states. It’s green new deal is a dud when it comes to what it’s supposedly all about. Indeed, its CO2 emissions reduction of 6.9% just barely rises to the national average of 13.4% over the 2005-2016 period.

California does excel at raising residential electric rates, though, according to the Energy Information Administration’s data for 2017: 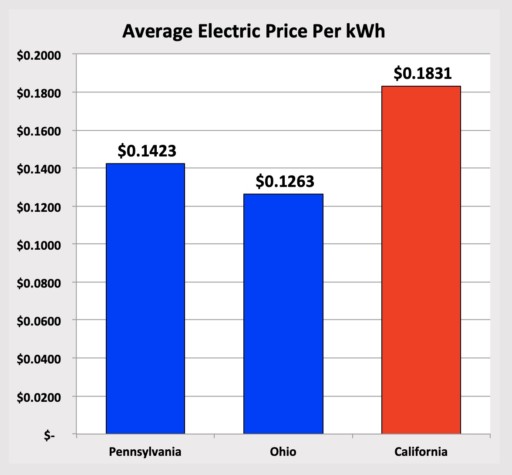 California, in other words, has brought the German Energiewende to America; lots of political correctness and virtue signaling, little to no progress on emissions and out-of-sight electric prices. And, New Jersey and New York want in on the game.

What all of these states haven’t understood, because they don’t want to understand, are the problems associated with the intermittent nature of solar and wind energy. It’s all revealed in a very neat chart updated daily at the California Independent System Operator (CAISO) website. The chart for yesterday, which is typical, follows: 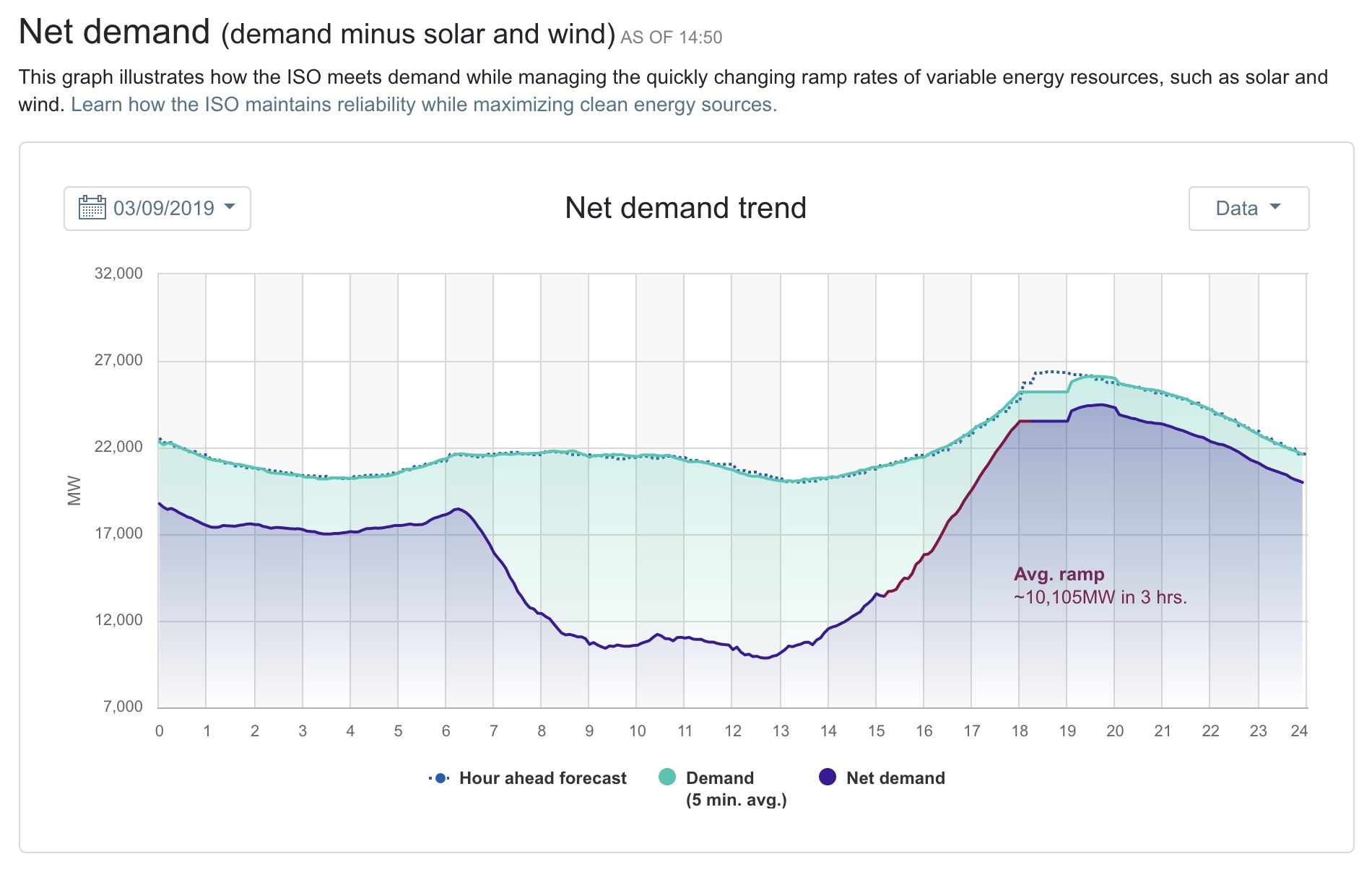 This chart shows how California’s energy demand is spread throughout the day and how much is supplied by solar and wind. That’s the light green portion of the chart. The light blue portion is what has to be made up with dispatchable energy from nuclear and natural gas fueled power plants. Despite the theoretical capacity of solar and wind, it is incapable of producing energy on demand, which means the dispatchable energy facilities have to be ramped up to the point they supply more than 90% of all energy demanded.

This is why solar and wind have such low capacity factors. They’re so inefficient as to be all but useless after 5 PM until 7 AM the next morning; about half the day overall. Worse, because the gas plants have to constantly ramp up and down, they are made more inefficient as well and they generate more expense and more CO2 than would ever be required if they were simply to operate more or less around the clock. This tends to off-set any gains made by substituting solar and wind for gas. And, the more solar and wind added to the system, the worse everything gets, especially financially.

To top it off, too much solar and wind energy produced when not needed must be nonetheless purchased and disposed of at a loss, which only raises electric prices further. This is not to mention the duplication of investment required when natural gas or nuclear plants capable of supplying more than 90% of all energy demands at a give moment are necessary.

This is the lunacy of the California’s green new deal and green new deals in general. They raise electric prices, while worsening the ability to meet emissions goals, damaging the entire energy system in the process. It’s chaos and calamities all along the way. God forbid we try this on a national scale.