…
[Editor’s Note: Things are bad in Texas, otherwise a great state, due to foolish reliance on wind energy for more and more of its electricity.]

In Texas, a cold snap resulted in wholesale electricity market prices at all-time highs in the $1000s of dollars per megawatt hour over Presidents’ Day weekend. That compares to prices that on average are in the low $30s. Texas generally expects price spikes to happen on hot summer afternoons, driven by air-conditioning, and to be brief, lasting minutes or hours, in isolated locations. The recent high prices that span the state have lasted more than a day and are likely to last several days.

Texas is usually a summer-peaking state with energy use and electricity price spikes driven by hot summer afternoon air-conditioning use. The temperature difference between the outside air (105 degrees F) and a “comfortable” inside temperature (75 degrees F) is at most 30 degrees F. Texas homes are designed with insulation for a 30 degree F differential and a preference for shedding heat. In recent days, the differential has been 60 degrees F and a need to retain heat. 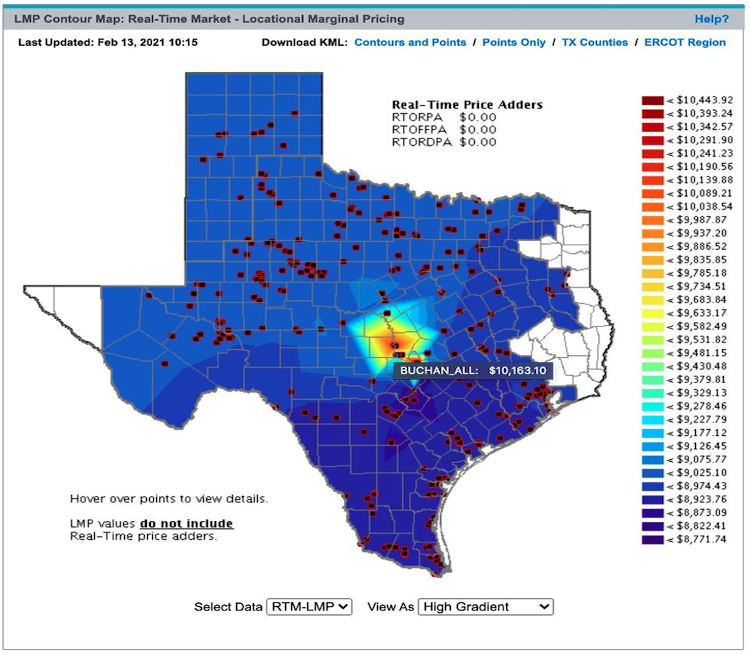 About 60 percent of the homes in Texas are heated by electricity—most of which use resistance heating or the older kind of heat pumps that use resistance heating as a back-up when the heat pumps lag behind. A standard electric furnace or heat pump in this auxiliary mode pulls double the power that an air-conditioner pulls in the summer, which results in a spike in demand for electricity.

The electric grid manager, the Electric Reliability Council of Texas, projects that demand will peak at around 72,000 megawatt hours during periods Monday and Tuesday, which is well above the previous winter record of 65,915 megawatts set on January 17, 2018. The state’s summertime record for peak demand was 74,820 megawatts.

Gas processing plants across Texas were shutting as liquids freeze inside pipes, disrupting output as demand increases. Texas facilities operated by pipeline companies DCP Midstream LP and Targa Resources Corp. were reported shut on February 11 due to the cold, while Enbridge Inc. was limiting requests to transport gas on a pipeline stretching from Texas to New Jersey. Gas production in the mid-continent region is down 35 percent from the 30-day average. As much as half a million barrels or more a day of output in the Permian Basin of West Texas may be impacted by well shutdowns.

In Oklahoma, prices for gas delivered into the hub closed at $377.13 per million British thermal units on February 12. That compares with a $9 close on February 10. Prices began the week at less than $4. 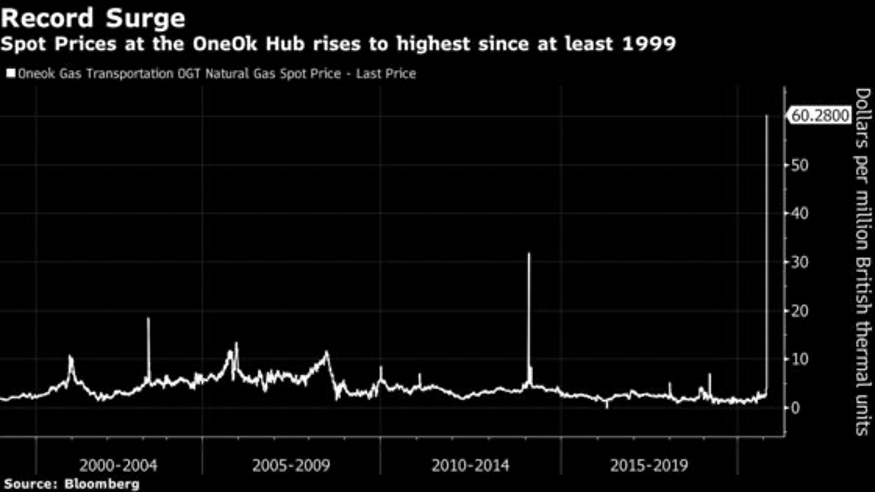 On February 12, the Texas Railroad Commission issued an emergency order to manage the potential shortages of natural gas as residents try to stay warm and power plants try to meet electricity demand. The commission’s order requires that natural gas is delivered to residences, hospitals, schools, churches and other locations that meet human needs first, then to power plants and then to industrial users.

Western and northern areas of Texas have been coated by ice that has taken out large amounts of wind turbines. Wind farms across the state generate up to a combined 29,230 megawatts of energy. As of the morning of February 14, 2001, the iced turbines comprised 12,000 megawatts of Texas’ installed wind generation capacity. The wind turbines that have been coated in ice will need time to deice and warmer temperatures before they can operate again. When ice forms on a turbine, it weighs it down and can break it.

Wind power has been the fastest-growing source of energy in Texas’ power grid. In 2015, wind generation supplied 11 percent of Texas’ energy grid. Last year, it supplied 23 percent and overtook coal as the system’s second-largest source of energy after natural gas.

The Department of Energy issued an emergency order allowing several Texas power plants to produce as much electricity as possible, which is expected to violate anti-pollution rules. The Energy Department order was requested by the Electric Reliability Council of Texas because millions of Texas households are suffering rolling blackouts for the first time in a decade as Texas cities are being plunged into darkness for an hour at a time—and in some cases longer.

Houston last saw a storm of this magnitude in February 2011, when rolling blackouts left residents in the cold and dark. The outages left thousands of area children in dark, cold classrooms as roughly 10 percent of the schools lost power for a couple of hours. At Hobby Airport, four partial blackouts temporarily dimmed some terminals but did not interfere with security or prevent flights from taking off or landing.

Texas grid operators were forced to call for immediate statewide conservation efforts, such as unplugging non-essential appliances, turning down residential heaters and minimize use of electric lighting.

As of Monday morning, February 15, 30,000 megawatts of power generation had been forced off the system. As of Tuesday, February 16, Texas had over 4.3 million customers without power, according to PowerOutage.us, which aggregates data from utilities across the country.

Cold, freezing temperatures have come to parts of the United States, and even to Texas, causing record energy demand and escalating energy prices despite Texas normally being a summer peaking state. Sixty percent of the state’s buildings use electricity for heating and the other 40 percent use natural gas. Since most of Texas’s electricity is generated by natural gas, the competition for natural gas has made natural gas prices spike as well. About 20 percent of the states’ generation comes from wind turbines, but half of them are iced up, putting more pressure on other sources of generation.

This is the future the United States can expect as President Biden works to make the U.S. electricity sector carbon free by 2035. In fact, it could get much worse as demand skyrockets to meet the needs of the all-electric car and truck fleet President Biden also wants. As the United States retires existing coal and nuclear plants, replacing them with wind and solar units that do not do well under icy conditions, Americans will be shivering in cold, dark homes and offices and reminisce about the days when fossil fuels and nuclear energy kept the power on. The Texas situation this week reminds us that energy is not something to be trifled with, as literally millions of lives are absolutely dependent upon it.