The Tesla solar debacle Is getting a lot of attention from Vanity Fair and a big lawsuit from Walmart. Both make great reading if you’re not Elon Musk.

I don’t normally read Vanity Fair and I don’t do a lot of shopping at Walmart, but both these institutions have decided to take on the sordid Tesla solar debacle. It isn’t pretty but it sure demonstrates the asininity of Andrew Cuomo’s first green new deal; his $750 million contribution to one of Elon Musk’s biggest government rent-seeking scams.

Yesterday, one of our guest bloggers sent me a link to a Vanity Fair story, the polite part of the title being “How Elon Musk Fooled Investors, Bilked Taxpayers, and Gambled Tesla to Save SolarCity.” It is an utterly devastating analysis of how Musk operates and took advantage of Andrew Cuomo. Here are just some of the facts related:

That last bullet point takes on special significance when other news is revealed in the article: the fact the Tesla solar debacle has now resulted in a lawsuit by Walmart over those solar roofs. A little research turned up the lawsuit itself, which may be found here. It reads much differently than most lawsuits; offering an easily digested narrative that tells the whole story of a Tesla solar fiasco that has left everyone poorer. Here are some of the excerpts (emphasis added):

This is a breach of contract action arising from years of gross negligence and failure to live up to industry standards by Tesla with respect to solar panels that Tesla designed, installed, and promised to operate and maintain safely on the roofs of hundreds of Walmart stores.

At approximately 4 p.m. on March 7, 2018, a fire broke out on the roof of Walmart’s store in Beavercreek, Ohio. Local news photographs and videos of the store showed a tremendous plume of black smoke emerging from flames as firefighters arrived at the scene.

As smoke invaded the store, Walmart employees made an announcement over the store’s public address system and instructed shoppers to evacuate. Customers in nearby shops were also evacuated until firefighters were able to control the blaze. The fire destroyed significant amounts of store merchandise and required substantial repairs, totaling hundreds of thousands of dollars in out-of-pocket losses. The store remained closed for eight days. Ominously, the fire had occurred near gas lines on the store’s roof. By stroke of luck, the gas lines remained intact, and catastrophic damages and injuries were averted.

On May 21, 2018, a fire broke out on the roof of another Walmart store, this one located in Denton, Maryland. The fire caused significant damage, including punctures of the membrane of the store’s roof. By another stroke of luck, this fire did not progress further and no one was injured. 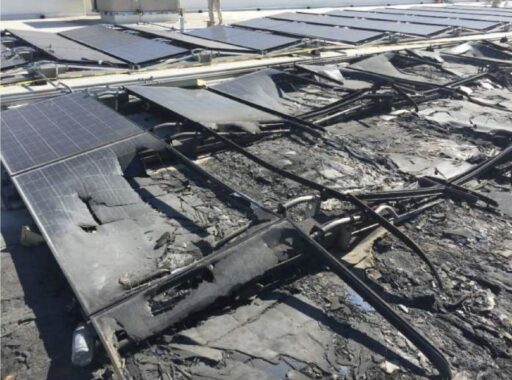 The results of a Walmart solar roof fire

On the opposite side of the country eight days later, fire struck again-this time on the roof of a Walmart store in Indio, California. Local news coverage on May 29, 2018 described a scene of “[t]hick black smoke billow[ing]” from the store’s roof, substantial portions of which were “engulfed in flames, which spread into the store.” “[C]ustomers and employees were evacuated to the parking lot.” A firefighter was treated for smoke inhalation but, by yet another stroke of luck, was not grievously injured. This fire resulted in millions of dollars’ worth of losses.

Why were multiple Walmart stores located all over the country suddenly catching fire? The answer was obvious and startling: the stores all had Tesla solar panels installed by Tesla on their roofs. At each location, the fire had originated in the Tesla solar panels.

The stores in Beavercreek, Denton, and Indio were three of more than 240 stores where Walmart had leased or licensed its roof space to Tesla for the installation, operation, and maintenance by Tesla of “photovoltaic” (i.e., solar) systems. Tesla designed these systems and represented them as safe, reliable, and an environmentally conscious way for Walmart to reduce its energy costs. In the contracts between Walmart and Tesla governing the solar systems, Tesla retained ownership of the solar systems, promised to design, install, inspect, and maintain them non-negligently and in accordance with prudent industry practices, and agreed to handle every aspect of the solar panels’ operation on Walmart’s roofs in a non-negligent manner. Walmart thus bargained for and obtained-not the right to have a particular system installed on its roofs but rather the right to enjoy perpetually safe and reliable solar panel systems free of any operation or maintenance responsibilities, which fell entirely to Tesla.

By May 2018, it was clear that Tesla had breached its contractual obligations. To state the obvious, properly designed, installed, inspected, and maintained solar systems do not spontaneously combust, and the occurrence of multiple fires involving Tesla’s solar systems is but one unmistakable sign of negligence by Tesla. To this day, Tesla has not provided Walmart with the complete set of final “root cause” analyses needed to identify the precise defects in its systems that caused all of the fires described above. The number of defects, however, is overwhelming and plainly indicative of systemic, widespread failures by Tesla to meet the standard of care, as set forth in the governing contracts, as to the solar systems installed at Walmart’s stores.

Fearing for the safety of its customers, its employees, and the general public, and wishing to avoid further damages and store closures, Walmart demanded on May 31, 2018 that Tesla “de-energize” (i.e., disconnect) all of the solar panel systems that Tesla had installed at Walmart sites. Tesla complied, conceding that de-energization of all the sites was “prudent” and recognizing that it could provide no assurances that the deficiencies causing its systems to catch fire were confined to particular sites or particular components.

Unfortunately, even de-energization was not enough to prevent an additional fire. In November 2018, Walmart discovered that yet another fire had occurred at a Walmart store in Yuba City, California-even though the solar panels at this store had been de-energized since June 2018. Wires on the store’s rooftop were still sparking at the time that Walmart discovered the fire and could have ignited more extensive flames, with potentially devastating consequences…

As of November 2018, no fewer than seven Walmart stores had experienced fires due to Tesla’s solar systems-including the four fires described above and three others that had occurred earlier (one in Long Beach, California, in August 2012; one in Milpitas, California, in 2016; and one in Lakeside, California, in 2017). The Long Beach fire resulted in the evacuation of the store and caused damage to merchandise as water leaked into the store through the roof and skylights. As a result of the fire, Walmart incurred over $25,000 in repair costs, along with other expenses and damage to merchandise totaling nearly $65,000. Tesla ultimately agreed to pay for a portion of these losses. The Milpitas fire also caused extensive damage, resulting in over $500,000 in losses to Walmart, a portion of which Walmart ultimately recovered from Tesla. Both the Milpitas and Lakeside fires were caused by faulty connectors in Tesla’s solar panel systems…

Many of the problems stemmed from a rushed, negligent approach to the systems’ installation. On information and belief, Tesla’s predecessor-in-interest-SolarCity-had adopted an ill-considered business model that required it to install solar panel systems haphazardly and as quickly as possible in order to turn a profit, and the contractors and subcontractors who performed the original installation work had not been properly hired, trained, and supervised. For example, the solar panel systems were installed at about 40% of the Walmart sites (approximately 80 to 100 locations) in a one-year period-far exceeding the appropriate rate of installations had adequate quality-control checks or supervision protocols been in place. On information and belief, when Tesla purchased SolarCity to bail out the flailing company (whose executives included two of Tesla CEO Elon Musk’s first cousins), Tesla failed to correct SolarCity’s chaotic installation practices or to adopt adequate maintenance protocols, which would have been particularly important in light of the improper installation practices…

On information and belief, Tesla, Inc. acquired SolarCity on November 21, 2016. Long before the acquisition, the ties between Tesla, Inc. and SolarCity were close ones: as multiple news outlets have reported, Tesla, Inc.’s CEO Elon Musk developed the idea for a solar power company in 2004 while on a road trip with his cousin, who co-founded SolarCity and became its Chief Executive Officer. The other co-founder-another of Mr. Musk’s first cousins-was named the company’s Chief Technology Officer, and Musk was the chairman of SolarCity’s board and its largest stockholder.

On information and belief, SolarCity’s business model was to design, install, and lease rooftop solar systems and to sell the energy produced by those solar systems to consumers.

Banks and other financial institutions funded the installation process and earned a return over the life of the solar energy contract. On information and belief, SolarCity’s goal was to install as many solar systems as quickly as possible, generating the contracts that provided the foundation for SolarCity’s revenue stream. As SolarCity’s CEO stated in a conference call in October 2015, ”the strategy of the company has all been about growth … to achieve scale.”

On information and belief, SolarCity’s business model was ultimately a bust. Unbeknownst to its customers until public reports later exposed its shoddy practices, SolarCity suffered from “a quality assurance problem.” Consumers began to complain about “installers failing miserably,” equipment that “just isn’t installed correctly,” and SolarCity’s failure to respond for months to “faulty installation” issues-a problem that “is more than just a few poorly trained technicians” and “le[ft] customer[s] hanging for weeks on end with serious issues.” On information and belief, as SolarCity’s problems accumulated, its stock plummeted 77% from its summit in February 2014,6 and its debt increased thirteen-fold over a three-year period, rising to $3.3 billion in June 2016.

On information and belief, in a heavily criticized deal entered into on August 1, 2016, Tesla, Inc. acquired SolarCity for approximately $2.6 billion in stock, converting it into its wholly owned subsidiary Tesla, and assumed nearly $3 billion in SolarCity’s net debt, nearly doubling Tesla, Inc.’s debt load. A Wall Street Journal columnist, referring to the financial difficulties plaguing both companies, wrote, “Tesla latching on to SolarCity is the equivalent of a shipwrecked man clinging to a piece of driftwood grabbing on to another man without one.”

That diagnosis turned out to be accurate, if not charitable. Although Tesla, Inc. prided itself on the fact that its “experience in design, engineering, and manufacturing should help continue to advance solar panel technology,”10 on information and belief, Tesla and Tesla, Inc. proved unable to manage the solar panel systems that they had inherited from SolarCity, to correct the problems that SolarCity’s grow-fast business model had created, and to maintain the already faulty solar systems that Tesla was under a contractual obligation to operate. As elaborated below, Walmart’s experience bears out Tesla, Inc.’s and Tesla’s inability to turn around and bail out the solar panel operations acquired from SolarCity.

Hey, New Yorkers and green new dealers, this is the company your governor bought into with your money, while turning down fracking and fighting pipelines. Tar, feathers…