Susan Sarandon posted a shockingly stupid Tweet yesterday, one that shows just how unaware and/or selfish some activists really are on environmental issues.

Susan Sarandon has never been a bright bulb in the world of celebrity activism. I remember well when she showed up in Dimock at Ray Kemble’s junkyard on that big diesel bus. She came with Loco Ono to do a stunt and, for once, did her best to avoid the camera when Phelim McAleer tried to ask her an actual question. Her idea of shedding light on the issues is to send out a mind-numbingly dumb Tweet, which is what she did yesterday.

Here’s the Tweet (actually a retweet), sent along by a faithful reader: 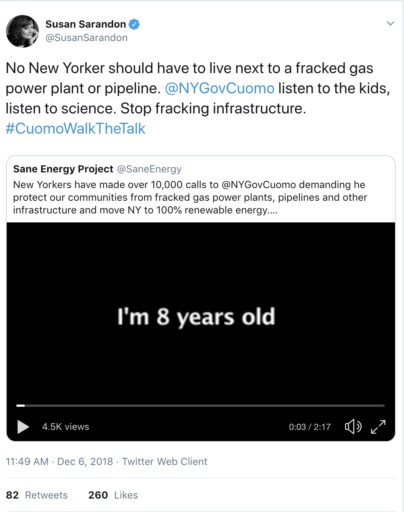 Sane Energy, of course, is insane and its insanity is funded by the likes of the gentry class Park Foundation. It’s doing a stupid petition drive bragging about getting indoctrinated eight year olds to call the Governor. But, it’s Susan Sarandon who steals the limelight in this case with her endorsement and claim “No New Yorker should have to live next to a fracked gas power plant or pipeline.” She begs others to “stop fracking infrastructure.” But, here’s the thing; Susan Sarandon lives in a gas-heated apartment and uses a gas range.

A quick internet search on “Susan Sarandon’s houses” indicates most of her homes (she’s had several) have gas ranges, as most celebrity homes do. It appears, though, she currently lives in an apartment building at 61 West 9th Street in Greenwich Village (Manhattan). A slide show profiling her penthouse apartment includes this picture, clearly showing the gas range: 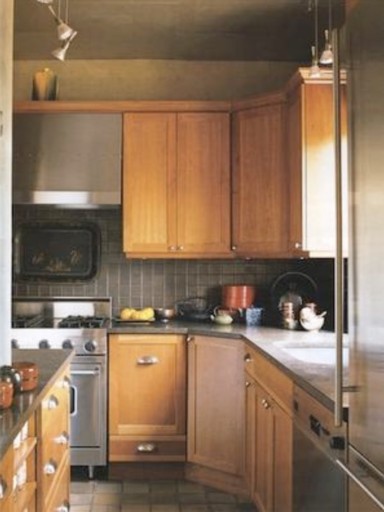 A search of the New York City DEP site also reveals this:

This means one of three things:

No. 1 is certainly possible but it would unkind to assume it’s true. No. 2 is clearly improbable. That leaves us with No. 3 as the most likely. Susan Sarandon, as one of New York City’s elites, wants to ensure no fracking or pipeline development occurs anywhere near her or her friends. She’s content to have Pennsylvania “fracked gas” delivered to her home via existing infrastructure but she wants to stop any infrastructure that would deliver gas to low and moderate income housing projects or provide jobs for other New Yorkers. She’s, in a word, just plain selfish.

3 thoughts on “Is Susan Sarandon Really That Unaware or Just That Selfish?”