Jim says Pennsylvania’s Department of Community and Economic Development a/k/a DCED is treating the Mariner East project to an Abbot and Costello routine.

We see a very positive sign that the U.S. Supreme Court is potentially interested in accepting and ruling on a case of tremendous importance to the oil and gas industry.

The case is PennEast Pipeline v State of New Jersey. New JerseyNew Jersey is attempting to block the PennEast project by denying it access to run across tracts of land either owned or controlled by the state, claiming federal eminent domain authority does not apply to state-owned land. New Jersey won the case in lower courts and PennEast appealed it all the way to the Supremes, who have now taken an active interest. No, they haven’t officially accepted the case…yet. But they have just signaled a strong interest. 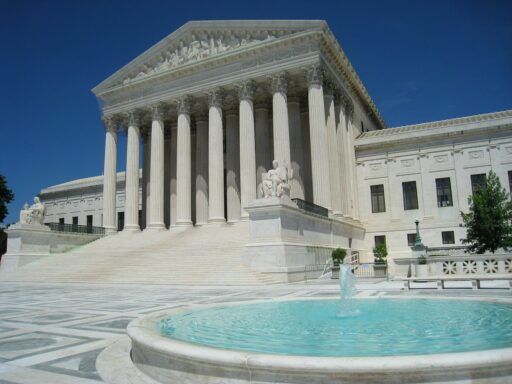 The high court ordered New Jersey to respond to a petition filed by PennEast. The state must answer/respond to PennEast’s request to the court to hear the case. The Supremes want to know what the lefties in New Jersey have to say for themselves. The state must respond no later than May 13.

We don’t have access to full copies for any of the following stories, but we do have enough in the summaries to give us the gist of the news, and some encouragement. First up is from the leftist (profoundly biased) POLITICO:

The U.S. Supreme Court has ordered New Jersey to weigh in on an ongoing legal battle over whether PennEast should be able to seize state-owned land for construction of its proposed 116-mile natural gas pipeline. PennEast asked the nation’s highest court to review a lower court’s finding that said the company couldn’t condemn state-owned land to build its pipeline. The ruling effectively blocked PennEast from construction on long stretches within New Jersey. While the Supreme Court has not officially agreed to hear the case, the court directed New Jersey respondents, including state agencies and the New Jersey Conservation Foundation, to answer a petition by PennEast, a move suggesting the court has an interest in the case.

Next is from Reuters:

The U.S. Supreme Court on Tuesday asked the state of New Jersey to respond to PennEast Pipeline Company LLC’s petition asking the high court to hear its appeal of a lower court ruling that denied the joint venture’s bid to access property over which the state claims an interest to build a $1 billion natural gas pipeline.

The court gave New Jersey and more than half-a-dozen of its government branches named in PennEast’s February writ of certiorari a month to file a response in the appeal involving a dispute over the exercise of the 1938 Natural Gas Act (NGA), which gives the Federal Energy Regulatory Commission (FERC) authority to review and approve natural gas projects.

And finally, from Bloomberg Law:

The Supreme Court wants New Jersey’s views on a closely watched land dispute that could sideline the $1 billion PennEast pipeline.

The high court on Monday directed the state to respond to a petition from PennEast Pipeline Co. LLC—a potential sign of the justices’ interest in the case.

At issue is a lower court ruling that blocked the company from seizing state-owned land to build the proposed natural gas line from Pennsylvania to New Jersey. PennEast filed a petition for review in February, saying the precedent could derail the development of critical infrastructure.

The Bloomberg page has a bullet point at the top that says, “State has until May 13 to file response.”

PennEast is a $1.2 billion new greenfield pipeline project from Luzerne County, PA to Mercer County, NJ. The project has not yet moved one shovel of dirt due to ongoing delays from lawsuits by (disgusting) Big Green groups and their colluders, mainly the Democrats who now run the state of New Jersey.

New Jersey sued to block PennEast from crossing state-owned land, arguing the federally-delegated right to use eminent domain by the federal government cannot override a state government’s right to refuse it. Last September the U.S. Court of Appeals for the Third Circuit issued a precedent-setting decision that disallows PennEast Pipeline from using eminent domain to cross properties either owned by or with easements granted to, the state of New Jersey. PennEast asked the full court (all of the judges) to rehear the case, which they refused to do.

PennEast subsequently appealed the Third Circuit ruling to the U.S. Supreme Court and is waiting, and hoping, the Supremes will hear the case. This latest edict from the Supremes is a good sign.

The stakes could not be higher not only for PennEast but for any and all new pipeline projects in “blue” Democrat states like New Jersey, New York, Massachusetts, California and others. If the Third Circuit ruling stands, a landowner who doesn’t want a pipeline running across his or her property will transfer an easement for their land to the state. The state will, in turn, say to the pipeline builder, “You can’t run the pipeline across that property because it’s state-controlled and we hate fossil fuels and you don’t have eminent domain rights on state-controlled property.”

And that’s it. The project would be dead. The Third Circuit decision is a disaster of immense proportions–if it stands. We don’t see how the Supremes can let it stand.

Editor’s Note: As I noted in my earlier post, “some politicos are already jumping on the idea of using agricultural and conservation easements as tools of political pipeline obstruction as a consequence of the circuit panel’s very bad and extremely wacky decision…”

“[T}he decision effectively renders meaningless the property rights of landowners who may have granted agricultural easements to the state even though they may never have intended to give up rights to have a pipeline cross their property (which could generate royalties and would have no negative impact on the ability to farm).”

These, too, are critical factors from my lay perspective and i hope they’ll come out in Supreme Court arguments if the case should be taken.