Problems with New York’s solar scams and the NY Green Bank, the latter of which is about to slime all New York ratepayers and taxpayers, reflect a dark side to what is supposed to be enlightened state policy. We reported recently on our latest investigation of the NY Green Bank, another sub-prime lending and corporate welfare scandal just waiting to happen. The NY Green Bank is only the beginning, though.

Sunlight disinfectant is also needed with respect to certain grants being made to feather the nest of New York’s wealthiest fractivists. I’m talking primarily about the Catskill Mountainkeeper. We reported on some of this back in July of last year when we wrote about Southern Tier Solar Works, which describes itself as an “initiative of the Binghamton Regional Sustainability Coalition (BRSC) in partnership with the Susquehanna Group of the Sierra Club, the Natural Resources Defense Council (NRDC), and Catskill Mountainkeeper” and is really nothing more than an anti-fracking political initiative to rip off more ratepayers and taxpayers and funnel money under the cover of solar grants and an “Energy Leadership Program” to fractivist radicals such as Adam Flint and and Issac Silberman-Gorn. It’s an outrage we also discussed here.

The Catskill Mountainkeeper got a $1,857,275 grant from ratepayers and taxpayers courtesy of New York’s crime boss governor to pursue its crony green agenda. It is described in this excerpt from the governor’s funding announcement: 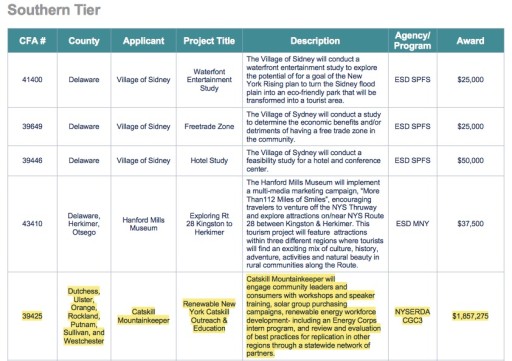 This and other grants was announced with great fanfare on December 11, 2014, six days prior to the governor killing fracking in New York “at this time.” They were part of the fourth round of Regional Economic Development Council awards, as this screenshot indicates: 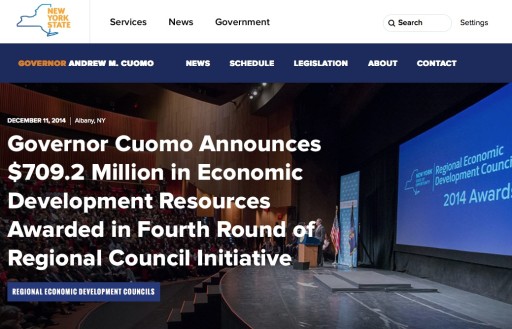 The grant to the Catskill Mountainkeeper was the 10th largest grant given to any individual project among the $80.8 million awarded to roughly 90 Southern Tier entities, accounting for about 2.3% of the money, but look above at the list of the Southern Tier counties supposedly targeted; which include Dutchess, Ulster, Orange, Rockland, Putnam, Sullivan, and Westchester, not one of which is actually a Southern Tier county according to the regional descriptions. Interestingly, the Catskill Mountainkeeper also wasn’t among the 28 funding priorities recommended by the Southern Tier Regional Economic Development Council.

But, there it is, listed as an “economic development” project for the Southern Tier. It’s not economic development at all, of course. It’s a payoff to the NRDC gang (of which the Catskill Mountainkeeper is an integral part) and walking around money for the likes of Adam Flint and Isaac-Silberman Gorn to conduct “energy leadership programs and “energy corps” intern programs to proselytize against fracking and promote solar scams that have no grounding in economic reality if one does the simple math as we did in the case of the town of Caroline the other day.

It’s utterly disgusting; a slush fund for wealthy fractivists funded by ratepayers and taxpayers, presented as an economic development initiative for a region desperately needing the real thing the grant is being used to oppose. Only in New York!