Stephen Hawking, in a recent interview more like a meltdown, claimed the U.S. pulling out of the Paris Accord was going to push the Earth over the brink.

Nearly every movie produced about an alien life form coming to Earth shares the same premise. It’s a tried and true formula—the Hero’s Journey monomyth—and usually centers around the space Invaders coming to Earth to consume its resources. Perhaps they are looking for fuel or to enslave the human race. Perhaps they were careless about their own planet and decided to abandon it and move to another inhabitable planet.

It might be said, in fact, we homo sapiens are engaged in the same thing. We are exploring the notion of putting a group of people on Mars through Elon Musk’s SpaceX program (if Musk doesn’t first blow his entire wad of government subsidies on SolarCity). Stories of finding planet that can support life are widely sought after by both major news outlets and grocery market tabloids. We are fascinated with the idea of jumping ship to another planet. 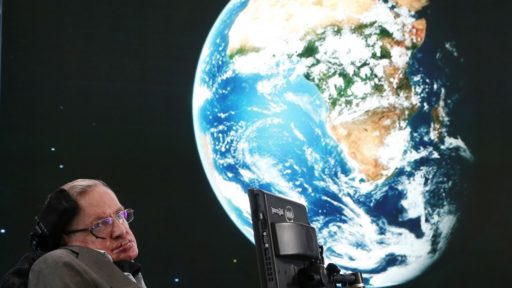 Recently, Hawking was speaking to the BBC and went out on a limb to say President Donald Trump’s decision to pull out of the Paris Climate Accord will push the planet over the brink and doom us all.

“We are close to the tipping point where global warming becomes irreversible. Trump’s action could push the Earth over the brink, to become like Venus, with a temperature of two hundred and fifty degrees, and raining sulphuric acid,”

“By denying the evidence for climate change, and pulling out of the Paris Climate Agreement, Donald Trump will cause avoidable environmental damage to our beautiful planet, endangering the natural world, for us and our children.”

Nearly everyone, ranging from actual climate scientists such as Zeke Hausfather to meteorologist Ryan Maue, seem to agree; Hawking’s opinion is “silly” and “bizarre.” The Skeptical Environmentalist, Bjorn Lomborg, even took swings at him for the dramatic comparison of our future to the Surface of Venus; we earlier covered his thoughts on the Paris Accord here.

Hawking did get some support, though. Erik Solheim, a politician and the Executive Director of the United Nations Environment Programme, didn’t mind the Earth-Venus comparison and tweeted the interview. Solheim, too, is married to the Climate Accord and has gone on record telling Reuters the U.S. will lose jobs:

“Obviously if you are not a party to the Paris agreement, you will lose out. And the main losers of course will be the people of the United States itself because all the interesting, fascinating new green jobs would go to China and to the other parts of the world that are investing heavily in this.”

I guess he missed the memo that the American Petroleum Institute predicted two million new jobs by 2040. He apparently didn’t study the economic productivity of renewables compared to other energy sources either or he would have learned the latter are any times more productive.

I have stated several times before here that I do believe in man-made climate change. This is the biggest reason I stand behind natural gas, but Hawking and Solheim are both attempting to fear-monger the average Joe with wild claims not supported by science. Their biggest fear is the U.S. has the intestinal fortitude to not blindly fall in behind an expensive and doomed-to-fail agreement. They also fear our refusal to conform is going to spread among other nations. The truth is this; we are doing it our own way and making more of a dent now than what we would be doing in 20 years under the Paris Accord.

Their call to doom reminds me of Remy Munasifi’s recent video, People Will Die! If you disagree with their ideology, people will die. Maybe Hawking is just looking for a reason to speed up space travel planning. The sooner we are the aliens, the sooner we can leave the Planet of the Apes.

5 thoughts on “Stephen Hawking Journey Into Politics A Total Meltdown”