A glance to the right of the StateImpactPA headline shot below reveals the clutches of the sleazy Heinz Endowments and William Penn Foundation. Both organizations spend millions to deprive middle class citizens of their God given property rights for the benefit of a wealthy few (read all about it here):

StateImpactPA is one of their tools.

The optics of the StateImpactPA story do reveal a great deal of context about Scott Ely. There’s a photo of him with discredited loudmouth and Little Brown Jug fondler, Craig Sautner. The background of the photo reveals Ely was a vocal anti gas activist long before he cast himself as a victim and crusader and, ultimately, as a plaintiff in a multi-million $$$$ shell game. 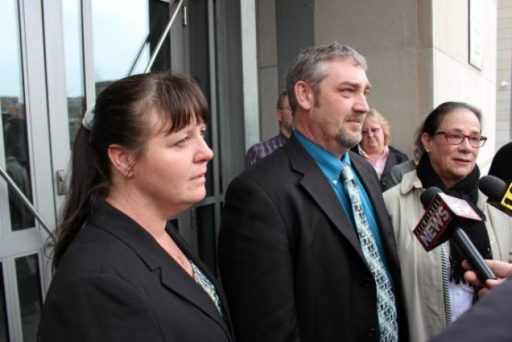 The first paragraph reveals the tar baby old Br’er Rabbit Ely picked up in his eagerness to cash out.  He claimed Cabot contaminated his well water by drilling for natural gas. Yet, he and his counsel stipulated in open court his water contamination issues long predated Cabot’s arrival.

And, what about this paragraph:

The verdict in March of 2016 was hailed as a major victory by critics of the gas industry, who argued that the rural community of Dimock was a poster child for the hazards of shale gas development.

If anti gas activists hailed the jury verdict against Cabot last year as a major victory against gas drilling and fossil fuel in general, would it not be reasonable to conclude without equivocation this decision is a major, crushing defeat for that pool of shallow intellects known as fractivists? Judge Carlson’s decision was, in fact, a huge, humiliating defeat for Ely and his ilk and Carlson didn’t spare the whip when penning his decision (emphasis added):

The evidence unquestionably showed that the plaintiffs had begun experiencing some problems with their water before the spud date for the Gesford wells. Mr. Ely prepared a handwritten document in 2009 noting the problems began in the summer of 2008, and Mr. Ely testified at trial that problems began in August 2008. On cross-examination, Mr. Ely emphasized that his family “began noticing issues with our water in August of 2008.” A day after giving this testimony, Mr. Ely reaffirmed it, noting that there was nothing about his prior testimony that he wanted to change…

As an initial matter, despite the plaintiffs’ persistent efforts to distance themselves from or disavow their binding stipulation, the evidence demonstrated convincingly that the plaintiffs’ problems with their water were witnessed by all of them before Cabot had begun drilling the first of the Gesford wells. The plaintiffs all acknowledged that they experienced problems with the water in their wells at least a month before Cabot started to drill on the Gesford pads.

This manifest problem of “cause and effect” was never adequately explained by the plaintiffs, who time and again either evaded this issue, attempted to impeach their own stipulation, or endeavored to provide some alternative explanation for their own prior representations. Eventually, however, the plaintiffs’ case was confined and hobbled by their own statements and testimony which showed that some of the very problems that they claim Cabot caused by its drilling activity occurred before Cabot broke ground on either well.

StateImpactPA them goes on to conclude key inculpatory evidence against Cabot was suppressed or excluded outright:

Much of the evidence of contamination was not allowed to be presented to the jury, including a consent decree issued by the Pennsylvania Department of Environmental Protection, which found Cabot responsible for methane migration due to faulty well construction.

Well, no. That’s not even close. To my knowledge and memory, the only “evidence” excluded was the unsourced material Ely’s counsel tried to submit after being unprepared for trial. I recall they tried to dump reams of additional documents of the court long after the period for submission had passed and counsel was roundly criticized by Carlson for their unprofessional conduct:

On February 12, 2016, at a pretrial conference, the Court was presented with a startling issue that had arisen: despite having been preparing for this litigation

for many years, the plaintiffs had failed to provide or identify scores of documents that they now first proposed to introduce at trial. Cabot, reasonably, moved to exclude these undisclosed materials, and the Court was constrained to enter an Order excluding more than 300 of the plaintiffs’ proposed trial exhibits resulting from counsel’s “completely unexplained, and wildly kaleidoscopic” submission of “voluminous, contradictory, cryptic, confused and confusing” exhibit lists.

Indeed, the Court was compelled to acknowledge that never in the undersigned’s 36-years as a federal court litigator and judge had the Court “[ever] observed a wholesale discovery default of this scope and dimension” and it was thus something that constituted “an unprecedented event in our experience.”

This ruling, which the plaintiffs’ vigorously contested, was compelled by the plaintiffs’ wholly unexplained production of thousands of pages of exhibits, and over 300 categories of exhibits, which had never previously been identified, and in some cases even produced, over the course of the entire litigation.

Thus, the Court found itself confronted on the eve of trial by a profound tension between what the plaintiffs wished their case to be and what it was in fact. This tension was exemplified by the plaintiffs’ interest in using countless previously undisclosed exhibits at a trial that was more than six years in the making and the defendant’s interest in not being ambushed with a trial-by-surprise. This tension, and others substantially similar, would bedevil this case over its duration.

The plaintiffs’ casual approach to identifying their exhibits in a “vague, ever-changing, and idiosyncratic form that continues to take still new shape even with trial approximately one week away” compelled the conclusion that “the plaintiffs’ disregard of their obligation to produce discovery in a timely manner, and to timely and intelligibly identify trial exhibits in accordance with the Court’s Local Rules and prior orders” required that the plaintiffs be limited to the 24 exhibits that they had identified in their pretrial memoranda.

The witnesses Ely produced, Rubin and Ingraffea, were unprepared, weren’t as recognized as experts in the subjects they wanted to discuss, were well-known agenda-driven activists and admitted in open court they performed no testing and lacked the expertise to testify on such matters. It was they who proffered the methane migration theory noted by StateImpactPA and so thoroughly eviscerated by Dr. Saba. StateImpactPA, in its haste to gin up outrage about evidence suppression and the expertise of witnesses, apparently missed Scott Ely trolling for the same.

One other thing. I couldn’t help but notice (although StateImpactPA conveniently managed to do so) is the connection to Vera Scroggins in links here and here related to the trial. Vera Scroggins, Scott Ely, Craig and Julie Sautner, StateImpactPA, Food & Water Watch (quoted in the story for no apparent reason), Heinz and the William Penn Foundation; it’s all one big happy family of fractivists – a fractivist freak show.

One thought on “StateImpactPA Is Part of A Fractivist Freak Show”