Fractivism abounds in dastardly deeds, demagoguery and dirty tricks but State Impact took things to a new level with a story exploiting the Amtrak tragedy.

State Impact, for those of you who don’t recall our earlier story of how this reprehensible news organ is funded, collects money from tax-exempt special interests at the heart of fractivism, including the Allegheny Front (funded by the Heinz Endowments and the Park Foundation) and Essential Public Radio (a trial lawyer PR initiative for all practical purposes), the Doris Duke Charitable Foundation (tobacco fortune funder of Josh Fox), the William and Flora Hewlett Foundation (huge funder of NRDC), the Joyce Foundation (major NRDC funder), Open Society Foundations (George Soros, 7th largest funder of NRDC) and the Wallace Foundation (still another major NRDC funder and sponsor of the CELDF).

It’s also an NPR affiliated enterprise and, therefore, some of your tax money went into its creation, although it claims to now operate without NPR funds, relying instead upon the special interests and two NPR stations, WITF in Harrisburg and WHYY in Philadelphia. Interesting, also, is the fact WITF received $1.1 million in government grants during its last fiscal year, some 19% of its budget and WHYY received $2.6 million in funds from the Corporation for Public Broadcasting (roughly 12% of its budget) and money is fungible, which makes me wonder what two US Senators and members of Congress think about how that money was used directly or indirectly to exploit the Amtrak tragedy to make a fractivist point.

What I’m talking about is a scurrilous story by Susan Phillips on State Impact that attempted to use the tragedy to somehow allege fracking could have made it far worse, based on nothing more than a photograph of some tank cars on another rail siding into which the Amtrak cars, after derailing, could, in Phillips imagination, have hit if things had happened differently. Here’s the AP photo she used in the story: 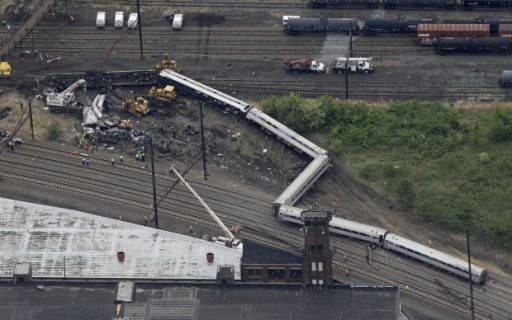 She doesn’t know what’s in the cars, doesn’t know whether Amtrak cars could have hit the tank cars, doesn’t know what caused the accident and doesn’t know whether the rail carrier complied or didn’t comply with applicable rules, but manages to use everything she doesn’t know to indict fracking. It’s the epitome of irresponsible journalism. She even went to David Masur of PennEnvironment (funded by some of the same funders as State Impact and probably the guy who suggested the storyline) to get a ridiculous quote saying “This could be just one more in a litany of near misses.” Oddly enough, that’s what I say about his organization’s two fake photo incidents – they were near misses in destroying what little credibility that group has except, of course, with like-minded media folks such as Susan Phillips.

The whole article is in the same tone and ends up with a below the belt hit on API for supposedly opposing that for which Phillips can’t even make a case, except by inventing a scenario based wholly on speculation and things she doesn’t know. Her logic might be compared to blaming airline disasters on the fact jet fuel can be produced from fracked oil, or interstate highway auto crashes on the fact LNG trucks were seen traveling in the other direction. Her speculation, moreover, is akin to saying we had a near miss when the Costa Concordia went down because the captain could just have easily piloted the thing into the path of a tanker ship. It’s insulting to the real victims of the tragedy and diminishes their loss for the sake of making a political point of no substance that ignores the responsibility of the captain and, in this case, Amtrak.

2 thoughts on “State Impact Uses Your Money To Exploit Tragedy”