Andrew Cuomo’s Start-Up NY program was supposed to be his alternative to fracking but it’s turned out to be an Upstate jobs ticket to hell – an utter failure.

Andrew Cuomo chose Friday afternoon as the time to release his report on Start-Up NY. He employed the classic political solution for delivering bad news; saving for a time no pays attention. He did so for good reason. His program to revive Upstate New York with something other than the fracking has failed.  The NRDC gang, of course, is the den of thieves; they who must be obeyed. They told him he can’t frack, so he devised a Rube Goldberg strategy to use other people’s money. Its a disaster; a ticket to hell for upstate jobs.

Read the report, but be sure to read the fine print. You can find it on page 10. Check the Footnote No. 2. I’ve highlighted it below: 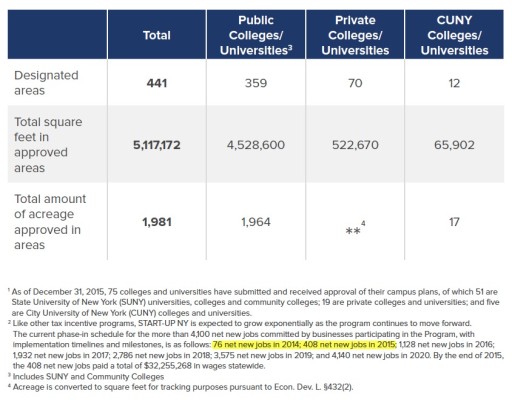 Yes, the report indicates a mere 408 jobs created to date (76 in 2014 and 332 in 2015). Are you thinking that’s not so bad because it’s at least positive? Well, I suggest going back to last year’s report and what Cuomo’s folks said then. They said they were going to create 2,085 jobs over five years. They produced 76 jobs the first year so this would have required 502 jobs annually the next four. They produced 332 or a mere two-thirds of what they projected, which was miserably low at the outset. Moreover, they are spending $50 million per year just to promote Start-Up NY with advertising, which is far more than the $32 million of payroll from these jobs.

Compare these numbers to the paltry performance of Start-Up NY. There is no comparison and Marcellus Shale development didn’t require $50 million of advertising or any tax incentives or subsidies. Plus, we’re talking about only one county and there are numerous counties enjoying the Marcellus miracle.

Andrew Cuomo has chosen poorly, very poorly indeed. He promised an Upstate revival and delivered a one-way ticket to hell.

One thought on “Start-Up NY: An Upstate Jobs Ticket to Hell”