The Marcellus Shale Coalition offered an update on industry economics to the Wyoming Chamber of Commerce, asking members to stand together on the severance tax.

Dozens of Wyoming County businesses representatives attended the Wyoming County Chamber of Commerce‘s (WYCCC) monthly educational luncheon on June 10 at the Stone Hedge Golf Club near Tunkhannock. The main goal of the luncheon is provide networking opportunities and features guest speakers to update the business leaders on the happenings of local area industries. This month’s update was offered by John Augustine, community outreach manager for the Marcellus Shale Coalition, who covered a large range of topics related to the natural gas industry in Pennsylvania. 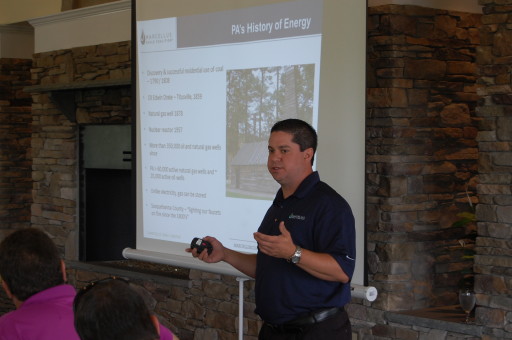 “The MSC has about 250 members across the state and about 96 percent of the natural gas produced in Pennsylvania comes from our members,” he said. “We focus on upstream, midstream and downstream operations, protecting and enhancing the environment, addressing landowner and public issues and maximizing the benefits for Pennsylvania.”

Augustine began with a brief history of the state’s energy history, beginning with the country’s first oil well in Titusville in 1859 and gas well in 1878, as well as the first nuclear reactor in 1957.

“We have windmills, we have solar farms; Pennsylvania is unique when it comes to other states in the country in that we have a little bit of everything,” he said, “and from a responsible energy standpoint, that’s exactly what we should have.”

Augustine also explained that other shale plays, such as the Utica and Upper and Lower Devonian, in the Marcellus region are beginning to gain traction through advances in technology. Rigs are also getting smaller while production is going up. From a production standpoint, he noted that over 2,300 wells are not online, and the primary culprit of that is the lack of pipeline infrastructure. 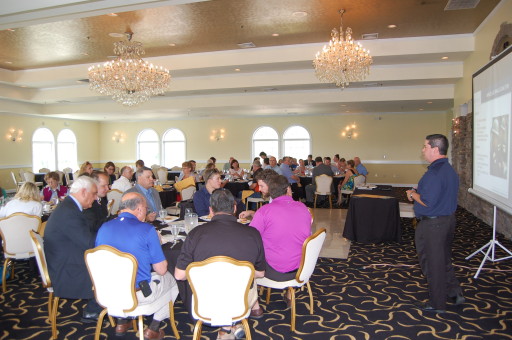 “We are victims of our own success,” he said. “The Marcellus has exceeded everyone’s expectations in terms of how much and how slow the decline has been.”

Additionally, for the first time, production in the Marcellus Shale declined by 28 million cubic feet per day, according to Augustine, a trend he expects to continue in the near future. He cited the amount of time it is taking to expand infrastructure, two and a half years for permitting and six months for construction, and a lack of increased natural gas consumption, as well as the threat of increased taxation.

“A lot of folks have said ‘hey, tax the industry, where are they going to go? They’re not going to leave.’ Well, they did and they are,” Augustine said. “The Utica is increasing. So the majority of that work now is in Ohio, where they just repealed their higher severance tax.”

He also explained that the traditional Henry Hub price, which is typically the go-to source to gauge the price of natural gas and is based in Louisiana, does not coincide with the price of natural gas in the Marcellus Shale region. For example, as of May, the average price on Henry Hub was $2.85 per million BTU, where as in the Marcellus markets, that price hovers around one dollar.

In addition to Pennsylvania now producing 25 percent of the nation’s natural gas, Augustine noted that a total of over $4.5 billion has been paid to royalty owners, including over $1 billion each to Bradford County and Susquehanna County. 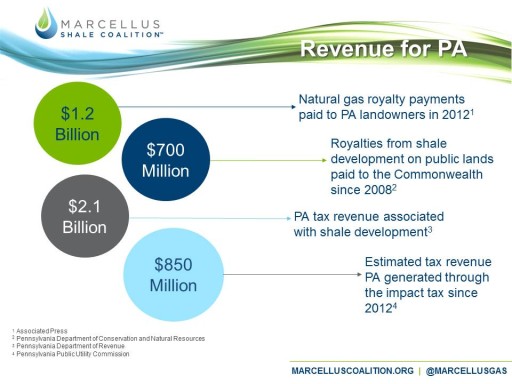 “Despite what some people think, we do pay taxes,” he added. “We’ve paid $2.4 billion in state and local taxes, the industry has put over $1 billion in road construction because we don’t like driving on potholes more than anyone else.

“Interestingly enough, the state, itself, has received almost $600 million in royalties, yet they’ve suspended all drilling from underneath state lands,” Augustine continued. “If you need the money, why wouldn’t you allow for the drilling?” He also added that the operators never operated on the surface of the state lands, only drilled under them.

The impact fee, which on hindsight should have been called an impact tax, was also a topic that Augustine discussed, noting that the legislation would be repealed if a severance tax in enacted.

“Over $11 million has come to Wyoming County in the last four years due to Act 13,” he said. “Under a proposed severance tax, the county’s yearly income is capped, meaning you will not make any more than your last number no matter how many more wells are drilled.”

Augustine went on to say that the severance tax would only be levied on unconventional, or horizontal wells, which he said raises uniformity concerns as it does not apply to conventional wells or other industries like coal and bluestone, which raises questions as it pertains to the Constitution of the United States. The severance tax also says that landowners would be exempt from the cost of the severance tax being passed on to them, which on the surface is great news for landowners, except that it is directly contradictory to the contracts agreed to by landowners and gas companies.

“But the true kicker is that the severance tax wants to put an artificial floor on the price of natural gas,” Augustine said. “I said earlier that the current price is around a dollar, but the governor wants to tax the gas as if it were priced at $2.97. That’s like someone making $50,000 a year, but I tell you that you’re going to pay $100,000 worth of taxes.

“And then, they’re going to use about $1.6 billion over 30 years to pay for new subsidized projects for wind and solar, so that’s like going to Coca-Cola and saying ‘hey, we’re going to take some of your money and give it to Pepsi’, it doesn’t make sense,” he added.

Augustine also added that the severance tax, as it’s written now, does not allocate any specific dollars to education. 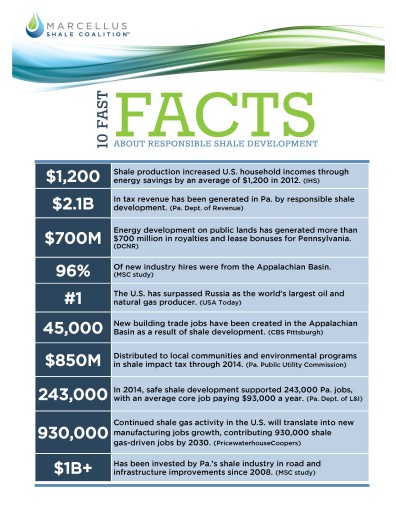 “It makes it seem like there’s a false choice between gas or educating our kids,” he said. “And that is not the case at all.”

If the severance tax were to go into effect, Augustine warned, the effective rate of the tax would be 19 percent, not five percent, according to the Independent Financial Office, which would take Pennsylvania from one of the lowest taxed states for natural gas to the highest in the country at a time when gas selling for an all-time low.

“We all stand united with this,” he said. “Whether you’re a county commissioner or a township supervisor or an industry representative, that that money should be going to communities like Wyoming County that are actually feeling the impacts.”