South Australia is still tilting at windmills, the new version being solar energy. This “stupid is as stupid does” play yields ever higher electric prices.

South Australia, a state of 1.7 million people, is on a renewable energy kick and has encountered price and reliability issues. South Australia first invested in wind power and found wind’s reliability to be a problem when it shuttered its last coal plant that backed up the wind power and exposed its ratepayers to outrageous prices and massive black-outs. It then hired Tesla to install the largest storage battery in the world last November—a 100-megawatt lithium-ion battery—to provide back-up for wind’s intermittency, at a price of $50 million. 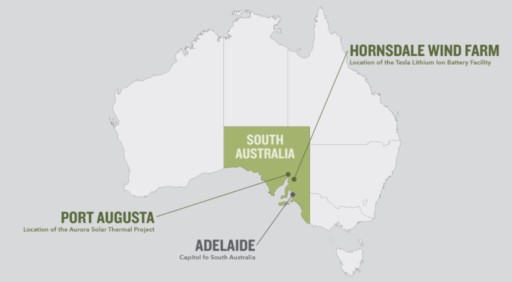 Now, South Australia will experiment with solar rooftop panels and Tesla Powerwall 2 batteries to form the world’s largest virtual power plant, costing $800 million. The project will cover 50,000 houses to be fitted with 5 kilowatt rooftop solar systems and 13.5 kilowatt hour Tesla batteries that together could provide up to 250 megawatts of solar power and 650 megawatt hours of storage.

The state government is providing a $2 million grant and a $30 million loan from its Renewable Technology Fund and plans to obtain additional funding from private investors. Tesla will be responsible for the installation.

Construction of the South Australia virtual power plant will begin with the test installation of solar panels and Tesla battery storage units on 1,100 social housing properties from 2018 to 2019. Over half of those installations are to be completed by the end of this year. It will be followed by mass installations for a total of 50,000 households with the target date for completion set for June 2022.

The project is expected to lower energy bills for participating households by 30 percent. By aggregating the individual solar and storage installations to create a virtual power plant, it is believed that that solar power injected into the grid will be cheaper and help lower electricity prices.

South Australia’s electricity prices are some of the most expensive in the world, which provides an incentive for households to install solar systems. The region’s electricity prices rival those of many European countries. They are three times more expensive than those in the United States and 50 percent higher than in the United Kingdom, rivaling those of Denmark and Germany—countries that are also invested heavily into renewable energy.

During one power outage, electricity prices rose to 200 cents per kilowatt-hour—about 20 times higher than the average U.S. electricity price. That blackout, which impacted 1.7 million people, started when a wind farm suddenly stopped providing 200 megawatts of power and destabilized the grid.

Major businesses in South Australia threatened to suspend operations entirely until the electricity price was lowered and some smaller operations had to close. A family-owned recycling company was forced to close after its electricity bills more than doubled—increasing from $80,000 a month to $180,000 a month in just a year and a half. Thirty five jobs evaporated with the closure. Another family-owned company, Plastic Granulating Services, which was founded 38 years ago, made the decision to close its doors because of higher costs and soaring electricity prices.

South Australia is suffering from high electricity prices and potential blackouts because of its unsustainable mix of intermittent renewable energy, which represent over 50 percent of its electricity generation mix. Now the region is looking toward solar rooftop panels and home storage batteries to form a virtual power plant and hopefully lower prices.

Wind and solar power represent almost 8 percent of the current U.S. generating mix, which so far has not destabilized the grid. But, costly tax credits for wind power have caused negative electricity prices that have resulted in traditional technologies, at times, being uncompetitive. Without the proper back-up power and policies that support it, the United States could end up facing similar reliability issues and challenges as South Australia.