Like the word “stakeholder” the environmental justice con game is just another political tool for empowering special interests through proxies never given.

No proof of that is ever offered, of course, because it’s functionally impossible to isolate and quantify “adverse environmental impacts” relative to their impacts on particular populations. It isn’t that one can’t assemble numbers. That’s easy. The problems with the premise are three-fold and they’re being completely ignored as Pennsylvania blithely implements a politically correct environmental justice con game.

First, one person’s environmental impact is another person’s livelihood in the form of a job. Those jobs are a real priority in minority and low-income communities. “Adverse,” therefore, is in the eye of the beholder.

Secondly, there is a presumption minority and low-income households are somehow impacted individually to a greater extent than other individuals. But a polluted water well, for example, impacts rich and poor alike; e-coli bacteria could care less who they make sick. If I make $100K per year, do I deserve any less attention to my health and rights than the fellow making $20K per year?

Of course not, and putting someone else finger on the scale to remedy a supposed problem by picking winners and losers by any method other than a free-market is an invitation to government bullying. It is a substitution of politics for markets, as if the former were somehow cleaner, when, in fact it’s the least efficient, least fair and dirtiest method of choosing.

Thirdly, the environmental justice con game doesn’t give any more power to minority and low-income folks than they already have; rather, the added power goes to bureaucrats, politicians and special interest groups speaking on behalf of those people but, more likely, pursuing their own agendas. This is precisely why Food & Water Watch is now playing the  environmental justice con game with that proposed SEPTA power plant; it’s a source of power to them to advance their own extremist policies (not to mention find-raise). The minority and low-income are just excuses.

The Pennsylvania environmental justice con game, outlined here, is a joke. The advisory board includes members from the radical Fair Shake Environmental Legal Services, there Sierra Club, a “riverkeeper” group, environmental law firms, similar organizations and but one voice for economic development, that being a waste management and incineration services company.

The whole thing its a cruel joke on minority and low-income communities who want jobs and higher incomes not the realization of some trust-funders aesthetic vision of what’s best for them. As one of our more avid readers notes:

I believe this phony ideology behind “environmental justice” was hatched to overturn the gravity feed power generation pipeline that had been planned for Storm King Mountain near West Point back in the 70’s. That trial was a watershed moment because environmentalism and it’s spawn “environmental justice” became a nascent tool in the anti-growth, de-growth toolkit. Something similar to what is called “environmental justice” today is what decided that case in favor of the anti who objected the pipe would ruin his view of the mountain. Never mind it would have prevented future brownouts/blackouts in NYC. The prevailing attorney was John Adams who later birthed the NRDC for the Rockefellers. Some environmental justice! The whole notion is an obscene joke and amounts to nothing more than discretionary veto power of one private property owner over another.

That’s well said. My view, as I’ve expressed here before, is that if there really were anything real by the name of “environmental justice” it would be about how the rich have used environmental excuses to limit growth and destroy economic opportunity for such amorphous things as the treasured view of a Patagonia jacketed hiker along the trails through the lands pastoral poverty where I grew up. It would be about how the DRBC is denying Pennsylvanians in Wayne County the same rights as Pennsylvanians a few miles away in the SRBC region, all for the purpose of appeasing wealthy special interests such as the Rockefeller family.

Interestingly (and quite laughably, I must add), DEP, in its desire to be as politically correct as possible while selling out Wayne County has helpfully produced an “Environmental Justice Areas Viewer.” It show areas of minority population and low-income by census block groups. Here’s an excerpt of the map for my area of Wayne County: 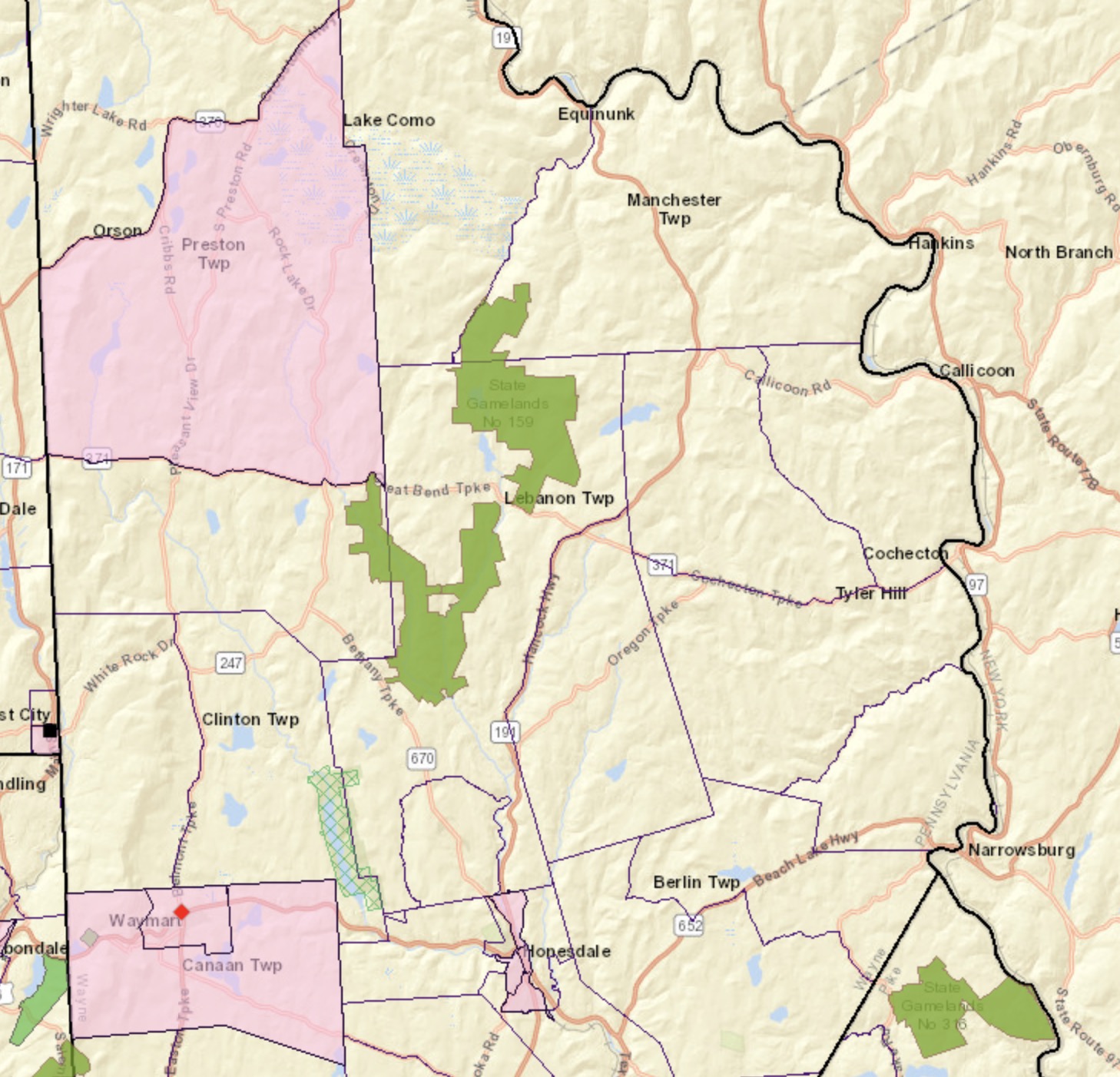 There are two things to notice on this map. The first is in the lower left-hand corner, where Canaan Township is highlighted in pink. That means it has the threshold level of minority and low income housing to qualify for the environmental justice con game rewards. Why? Because there are two large prisons (one state and one Federal) in that community, the one responsible for what little growth in population Wayne County has had, But, by God, we’re protect the visual character of that area for those prisoners. They shouldn’t have to look at any damned drilling rigs, after all.

The second thing is the area immediately above which includes the northern part of Mount Pleasant Township and the southern part of Preston Township, both of which includes portions of the DRBC and SRBC regions. They directly adjoin Susquehanna County with gas wells just a couple of miles to the west. They are both prime areas for natural gas development and they’re poor. They need it.

So, what is environmental justice for them? It’s obviously to give them the same rights to develop their natural resources and their economies as their immediate neighbors enjoy. Instead, they are being denied those rights by rich elitist special interests who want nothing for them other than to quietly disappear so they can enjoy a wilderness playground. If a few poor people are needed as gatekeepers and to mow the lawns for a pittance that’s ok, of course. They can stay but the rest of us should learn a new trade and move on, according to the folks to whom the DRBC caters. I call that environmental injustice and it’s being packaged and sold as the opposite.

New Greta On The Shelf Doll Will Track Your Climate Sins