The SolarCity corporate welfare scam being perpetrated on the taxpayers of New York is even worse than we thought, as the latest information demonstrates.

The scam nature of Elon Musk’s enterprises is slowly starting to unfold. New information has come to my attention since just yesterday when I wrote about the liklihood Andrew Cuomo may have killed fracking “at this time” to protect his big bet on SolarCity, the Musk company being run by his cousins. It’s looking more and more as if Musk has sold Cuomo and New York’s taxpayers (and some others) a bunch of bridges he doesn’t own.

The big news on SolarCity comes via Jim Heaney at Investigative Post who we previously quoted in an earlier story on the cronyism that is SolarCity. Heaney’s latest expose on SolarCity, entitled “SolarCity: Mayday! Mayday!” includes this:

The project took on an added air of risk Thursday, in light of not one, not two, but three pieces of bad news.

For starters, the company disclosed it posted a net loss of $234 million in the third quarter. That’s the biggest quarterly loss in the history of the company and brings the year-to-date losses to a staggering $537 million.

See a pattern there?

Those are pretty remarkable losses, which is captured in this graphic: 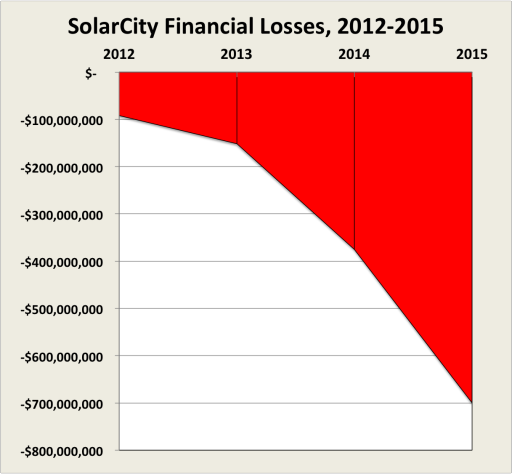 Yes, there is a pattern. It might not matter if sales were growing even faster. Amazon, for example, incurred many years of losses before turning profitable as it was changing the nature of book selling. The latest SolarCity 8-K filing with the SEC, though, indicates the following:

The net loss for the most recent quarter was 234% higher than a year ago, compared to a 63% revenue increase. The company somehow managed to grow its losses by $164 million while growing its business by $33 million. Meanwhile, its current ratio deteriorated from 1.77 to 1.00 and its long-term debt grew by $546 million or 190%. It’s rather remarkable but not in a good way.

Why is SolarCity in such straits? The answer may be found in an article in MIT Technology Review this past August. A Susquehanna County reader brought to our attention. Consider these excerpts (emphasis added):

Even if all goes well, the gigafactory could be facing a dramatically different solar-power market. At the end of 2016, the federal tax credit for solar power is due to drop from 30 percent to 10 percent for businesses and to disappear altogether for consumers who buy their own solar panels. By making residential solar power less affordable, the change could be devastating to the industry. And it will come just as the Buffalo factory is ramping up its manufacturing capacity.

Fears about what will happen when the tax breaks decrease are fueled by an unfortunate reality: in most locations and under most conditions, unsubsidized solar power is still far too expensive to compete with other sources of electricity. And rooftop solar is especially expensive. Subsidies and other government incentives are the reason the solar market is booming. If technologies were chosen purely on the basis of what it costs to produce power, “there isn’t a market for residential solar,” says Severin Borenstein, a professor at the Haas School of Business at the University of California, Berkeley, and an expert on electricity economics. Without government incentives for clean energy like solar, he says, “natural gas wipes everything else away.”

Much has been made of the fact that solar power is nearing grid parity—the point at which it is just as cheap as electricity from natural gas or coal. Most recently, a reportby Deutsche Bank calculated that solar power is already at grid parity in 14 U.S. states and that nearly all the others will be there by next year. But that doesn’t mean it is just as cheap to produce solar power as it is to generate electricity with natural gas. The Deutsche Bank report compares today’s cost of solar power with the retail price of electricity, which includes various charges, including fees for upgrading and maintaining the grid. That’s a sensible comparison for consumers deciding whether to install solar power. But it isn’t a true comparison of the costs to actually produce electricity. And that is the comparison that matters in determining the most cost-effective way to introduce more clean power and lower our carbon emissions.

The cost of the photovoltaic module—the chunk of silicon or other semiconductors that convert sunlight to electricity—has dropped impressively over the years. A silicon solar module sold for $4 per watt in 2008; in 2014 it was 65 cents per watt. But it has been more difficult to cut the other expenses—the so-called balance of system (BOS) costs, which include hardware like the inverters that are necessary to connect the panels to the grid and, most crucially, the labor to install the equipment. Installing heavy solar panels on the roofs of houses is particularly expensive. In such installations the BOS costs account for roughly 85 percent of the total expense of the system, according to a lengthy MIT report called “The Future of Solar Energy,” released in May. Or as Robert C. Armstrong, director of the MIT Energy Initiative and one of the authors of the report, puts it: “Even if you give away the [photovoltaic] materials for free, you still couldn’t produce electricity as cheaply as with coal or natural gas.”

Economists favor a measurement called “levelized cost of energy” to compare different sources of electricity. The calculation estimates the expense of installing a system and the average cost of producing electricity over its lifetime. When expenses are computed this way, big solar farms that directly supply electricity to utilities are the most cost-effective kind of solar power. According to the MIT report, solar-power plants in Southern California and Massachusetts would have levelized costs of 10.5 cents and 15.8 cents per kilowatt-hour, respectively (California gets far more sun, producing greater output). Meanwhile, a new natural-gas power plant can generate power at 6.6 cents per kilowatt-hour. The comparison for residential solar is even more discouraging: a Massachusetts home generates solar power at 28.7 cents per kilowatt-hour, and one in Southern California produces it at 19.2 cents, says the MIT report…

“As one of the cloudiest cities in the United States, Buffalo is not a particularly attractive area for solar power. Rather, SolarCity is making its manufacturing debut there because of the state’s generous incentives and the city’s industrial infrastructure and experience. Ironically, Buffalo offers another huge benefit: the electricity rate for manufacturers averages just 4.79 cents per kilowatt-hour, which is possible because of cheap hydroelectric power generated from Niagara Falls.”

Pretty illuminating stuff, isn’t it? SolarCity can take all the grants, tax credits, cheap electricity it can lay its hands on and it still won’t be able to compete with natural gas even if the cost of the panels is reduced to zero. No wonder another of SolarCity’s SEC filings admits its business plan could be derailed by “a reduction in the price of natural gas as a result of new drilling techniques or a relaxation of associated regulatory standards,” according to this excellent article in the Antelope Valley Press. The whole thing rests not only the ability to harvest government largesse but, also, on the ability to impose government burdens on natural gas. A fracking ban, of course, is perfect in that regard, especially if you’re looking to sell to the New York market and want to infect the gas industry with a virulent disease you hope will slow it down.

This reinforces the theory we set forth yesterday; that Elon Musk co-opted Cuomo in furthering his scams. That they are scams is further re-inforced by stories of how this guy has operated elsewhere. Some examples:

SolarCity gets lucrative tax breaks in exchange for job creation in Oregon, then sources panels made by exploited prison workers:

Excerpt:  After offering Tesla more than $1 billion in tax incentives to construct its factory near Reno, several Nevada lawmakers who approved the deal expressed frustration when the electric car company announced Friday that it had signed deals with two companies to obtain lithium — a critical component for its batteries — from northern Mexico, rather than from mines in Nevada.

Tesla battery-powered cars are not green:

Excerpt:  But even as Tesla’s batteries promise to reduce tailpipe emissions, more direct environmental concerns surround the current boom in lithium-ion batteries. As hundreds of thousands more of these batteries hit the market, the problems that come with lithium mining, battery lifecycles and recycling loom large.  In a 2013 report, the U.S. Environmental Protection Agency’s Design for the Environment program concluded that batteries using nickel and cobalt, like lithium-ion batteries, have the “highest potential for environmental impacts.” It cited negative consequences like mining, global warming, environmental pollution and human health impacts.

Tesla technology is not green (a good read, unless you’re Elon Musk):

Excerpt:  Energy independence, a reduction in greenhouse gas emissions, lower fuel costs: All of these promises are factors behind the rise in electric vehicles’ popularity. Unfortunately, they’re more fiction than fact. [See also this article from DigitalTrends.com.]

Why are we spending so much time on the SolarCity deal? Because its emblematic of the vicious cancer in New York politics where political correctness yields demagoguery that, in turn, yields corruption and, in the end, yields failure after failure. It is a particular problem in states such as New York where large urban populations far removed from the mundane world of producing the food and energy they use control the politics. They are especially vulnerable to the entreaties of energy con artists and political demagogues who suggest they have the magic bullets. The plight of Upstate New York, captive to all these folks and their whims, is bleak until there’s one failure too many. There is some hope at that point for a brief interlude of common sense where fracking will have a chance.

7 thoughts on “SolarCity: It’s Worse Than We Thought”