Southern Tier Solar Works has again tried to silence Vic Furman, but he has a question. Why, if solar is so great? And, why are they practicing deception?

There’s something rotten going on with Southern Tier Solar Works. Readers of NaturalGasNOW may recall a post I wrote back in June when Southern Tier Solar Works threatened me with police intervention if I attended a propaganda session they were doing in Sidney, New York. Yesterday, when I went to the Broome County Office Building for another of their sales pitches, I was met with further attempts at intimidation. I got in, but it was not without harassment.

Here’s the event to which the public was invited and I signed up: 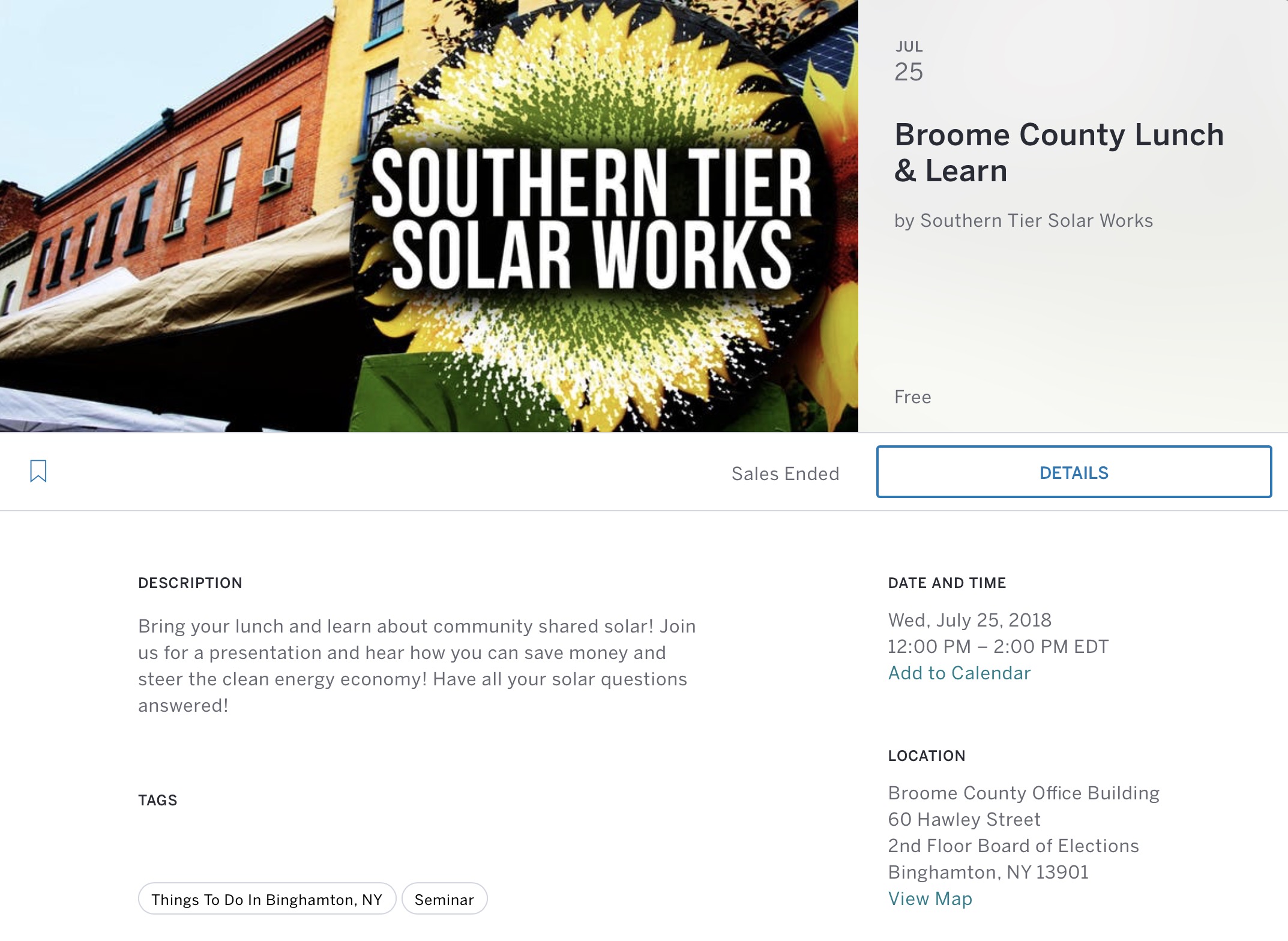 Notice the event was both open to the public and conducted in a public building, the Broome County Office Building. The “Broome County Lunch & Learn” event took place yesterday from Noon until 1:30. I am happy to report the meeting was filled with 50 percent pro-gas supporters who just wanted to question the presenters on their sales pitch and presentation. But, there are two stories here.

First, there was the intimidation attempt. I have entered the Broome County Office Building many, many times with never any problem whatsoever. Today was different.

I passed through the building entrance and approached the security desk as required of all visitors. There was a young security lady by the name of Morgan, I believe, who had me put all my possessions into a tote so I could be scanned for guns, bombs, knives and the like.

Prior to walking through the scanner, she asked me where I was going to which I replied “second floor elections office for a meeting on community solar.” After going through my wallet and its compartments she suddenly asked a question,. “Oh, are you for it or against it?” It was none of her business but I replied anyway saying “I am for the truth.”

She then asked if I was a protestor to which I replied “No, I am here to hear the pitch and ask questions.” She then, very seriously, lectured me. “I hope I am not going to have to come remove you physically from the meeting.” I assured her she wouldn’t, although I have to say I was somewhat shocked by her assumption and implied threat.

I ascended to the second floor using the stairs but, by the time I got to the first landing, a second security guard showed up and hollered up to me in front of others. “Sir, what’s the problem? The young lady had obviously called for backup, but why?

“I am simply going to a meeting,” I said, “so why the third degree?” He asked if their was a problem and again I stated “No” asked why I was getting this interrogation. This episode was witnessed in part by my friend, Frank Cheranga, who was going to the same meeting but was not grilled like I was. In fact, I saw no one else meet with the harassment I received entering a county office building.

I can’t help but wonder, since I had to register in advance, if this scene was orchestrated by Southern Tier Solar Works? After all, they sent me a threating letter weeks earlier stating they were going to inform the police I was coming to a different meeting and must be watched, threatening me with arrest if I showed up.

I called Broome County Security Services to register a complaint about this treatment. Could it have something to do with the fact Southern Tier Solar Works is trade name for the Binghamton Regional Sustainability Coalition (BRSC), where County Executive Jason Garner’s father Douglas Garnar sits as a board member of the non-profit corporation? I suspect so. The self-serving insider nature of BRSC is apparent from the fact the chair, Gay Conough, is the primary beneficiary of its activities. Her solar installation company, Extraterrestrial Materials, Inc. (ETM Solar Works) gets contract work the non-profit promotes.

As far the solar informational meeting itself, there is not much to say or report except to pose another question. Why, if solar energy, is so great, do they have to deceive to sell it?Adam Flint, the spokesperson and chief propagandist for Southern Tier Solar Works, is nothing more then an energy broker with no actual product, as far as I can tell. It seems he merely pitches for Gay Conough and other contractors who want to make money off the installations.

When it came to selling he touted Germany as the prime example for his pitch. I questioned this. “If solar is Germany’s primary power source why have they built and so many new coal fired power plants?” I then answered my own question by telling him the reason; that Germany could not compete in manufacturing with the rest of the world paying 60 percent more in energy as a result of its stupid Energiewende program.

Adam proceeded to then shorten the question and answering period, saying he wanted to provide time with the two possible customers in the room. As I stated above, 50 percent of those in attendance favored natural gas, but here’s the deal. There were two presenting, three students helping at the entrance and running the screen, and two employees of ETM-Solar Works, two people with possible interest and, then, Frank and me.

If, after weeks of advertising, the attendance was this low—only two prospects and two questioners—this looks like another business destined to fail when the subsidies Adam Flint bragged about getting from NYSERDA run out.

There is no public interest. There are only give-away subsidies and insider deals where Adam Flint and Gay Conough appear to be using BRSC, Broome County government and Binghamton University to further their own interests. It has all the appearance of a rip-off to me but, hey, maybe I’ll be proven wrong if there are other facts of which I’m not aware. Let them show us why it’s ok to mix a non-profit’s business with private and with government. As I stated above, though, it sure looks like there’s something rotten going on with Southern Tier Solar Works. It ought to be further investigated.

4 thoughts on “If Solar Is So Great Why Does Southern Tier Solar Works Deceive?”