Dan Markind offers a common sense approach to the challenge of rebuilding our nation’s energy infrastructure; drop the simplistic slogans and work together.

California and the Southwest are sweltering under one of the worst heat waves since the 1930’s dust bowl.  Under such brutal conditions, residents face the added insult of rolling power brownouts.

Temperatures north of Los Angeles in the San Fernando Valley are approaching 110 degrees.  Unfortunately, neither the local power supply nor the power grid is capable of coping.  There are numerous reasons for this.  The biggest is our nation’s overall failure to update our energy infrastructure.  Another reason, however, is the refusal of California to build new natural gas or nuclear power plants that can help provide power in times of great demand.  Just like the Oroville Dam situation in February 2017, Californians are learning that when they most need quality infrastructure and reliable power supply, they have it the least.  Hopefully, this will not become the fate of the entire nation.

For those of us who have been touting an “All In” approach to energy, that has many facets.  While we can smirk at the current problems of Californians, we also must insist that the companies providing the “All In” do it responsibly.  Once again, here in Southeastern Pennsylvania we see what happens when that is not the case.

Sunoco Logistics’ troubled Mariner East 2 project remains shut down.  It also continues to have an effect on Mariner East 1. During the last few weeks, it appeared that another section of ME1 in Chester County was exposed to the elements.   On Thursday, however, a spokesperson for Sunoco Logistics’ parent, Energy Transfer Partners, said that ETP had confirmed that the pipe visible in a tributary to Valley Creek in not ME1.  Instead, it is “an abandoned section of pipeline that was taken out of service in 2015.”

This obviously was good news for the local residents and for companies that transport gas through ME1, but it did little to quiet concern over ETP’s handling of the construction.  If it took that long for ETP to figure out which pipe was exposed, how much else don’t they know about their own pipelines? 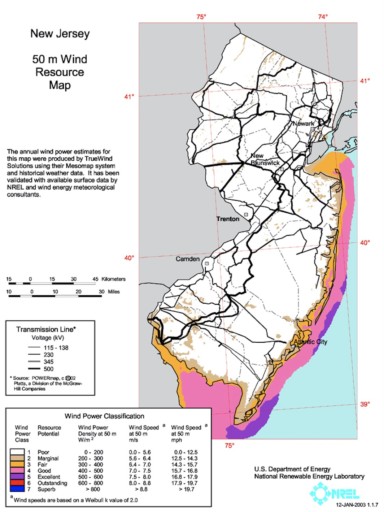 Sixty miles west at the New Jersey Shore there is another battle brewing about transmission lines, this time dealing with offshore wind.  Under the new administration of Democratic Governor Phil Murphy, New Jersey set a target of 3,500 megawatts of offshore wind by 2030, with an initial goal of 1,100 megawatts.  The State has received interest from four offshore wind developers seeking to build the giant wind farms off the Jersey Coast.

However, no one yet knows who will build the high-voltage power lines that will take the electricity from its offshore generation points to the customers.  One thing is certain.  It will be tremendously expensive.  Estimates range as high as $7 billion to build enough lines to handle 3,500 megawatts.

While the companies squabble over who will build the transmission lines, we have to wonder if anyone in New Jersey State Government has a handle on what exactly this will look like?  What damage will this do to the views of the people who flock to the Jersey Shore each year for the beach?  What will happen if and when these high-voltage lines corrode due to the elements?  What type of environmental disasters might occur?

Already, the residents of Ocean City, Maryland, about 100 nautical miles south of New Jersey, are balking at allowing any wind farms within 30 miles of their beach town.  The wind farm developer, US Wind, offered residents free electricity in order to obtain the needed building permits.  Ocean City residents refused.  They did not want the key to their economic wellbeing – their beach – potentially destroyed by immense wind turbines and power lines.  Ocean City Mayor Rick Meehan was very blunt about his intention to force the project further offshore.  “We’re going to continue to proceed with any avenue we have to address our concerns.”

As is common in 2018 America, we reduce complex subjects to simplistic slogans.  There is an intense argument about the role of government in society.  Here’s a personal suggestion.  Let’s charge the Department of Energy and the Environmental Protection Agency with working together to examine what the optimal mix of energy sources should be.  Both agencies could require universities and foundations to direct some of the federal grant monies to study this as well.

Instead of another study of the link between fracking and gonorrhea (I kid you not), the federal government could target research dollars to analyzing what is scientifically possible and what it would take to develop solar and wind power as primary energy sources.  We would have to include all of the costs and environmental degradation from the generation, storage and transmission of this power, we would have to factor in what happens when those sources aren’t available, and we would have to study what the full infrastructure would entail.  Still, it is long past time we got started on seriously analyzing where we want to go, and not just listen to activists on all sides whose positions so frequently do more harm than good.