More evidence keeps turning up to demonstrate the impact of the shale revolution; things those who aren’t watching might miss. Our opponents will wake one day soon to realize the fracking wars are over and they lost.

We’ve posted several stories about the impact of thew worldwide shale revolution, but new evidence turns up every single day to demonstrate the overwhelming force of shale in the tumultuous world economy. Quite often, the story is best told with charts that simply plot what’s happened since 2008 or so when the shale revolution took off. Let’s examine a few of those.

IHS just published an analysis of how Germany could save the “energiewende” or energy transformation program they have been pursuing for several years now.  Our friend Nick Grealy writes about it here and you can read the IHS summary here. You can’t be around a US fractivist for more than two minutes before they hoist up the German flag as the banner to follow on renewables and the energy transformation they hope will produce a new world suited to their ideology.

Those of us who monitor these things know the Germans are now moving in the other direction, but our friends on the other side haven’t caught up yet and aren’t much interested in doing so; they prefer to live the dream. The fact is Germany has no choice but to join the shale revolution and here’s why in one simple chart from the IHS study: 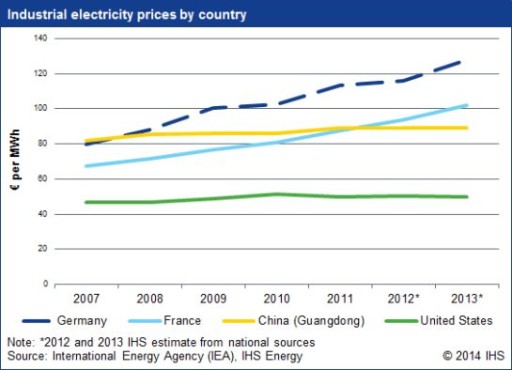 The US has kept its industrial electricity prices in line with shale gas powered power plants. China has done so with coal, with great consequences to human health from the increase in PM 2.5 pollution. France and Germany have followed the dream, latching onto the politically correct energiewende as policy. What it’s got them is a 50% increase in electricity prices that has destroyed their economic competitiveness and sucked wealth out of the German economy. If they want to compete and maintain their lifestyle they must join the shale revolution. The IHS report lays a foundation for doing so.

The Shale Revolution Changes the US Trade Balance

Germans are waking up late but will, given the industriousness of their society, quickly catch up. The US picture has already changed dramatically as a result of the shale revolution and we can expect Germany and the rest of the EU will be motivated by their desire to compete. Still, the US has a leg up and here is the result in one easy to grasp chart: 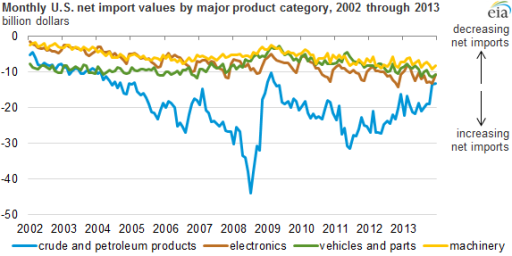 Part of the explanation is that the shale revolution isn’t confined to gas, as the Bakken demonstrates. We’re using fracking to produce oil as well and lower its cost. This has allowed exports to help drive down net imports, as can be seen below:

The shale revolution has enabled as to simultaneously reduce oil imports and produce petroleum products (e.g., propane, butane) from both fracked gas and oil at reduced costs for export. Imagine where we’ll be if when LNG exports kick into high gear. Meanwhile, our natural gas imports have dramatically declined:

The US balance of trade, as it easy to see, is being daily improved by the shale revolution. While some will always try to say we should keep everything for ourselves, this last chart demonstrates otherwise. We live in a global economy and depend on imports even when we have much to export.  That we will have more to export via the shale revolution simply means we can compete more effectively. That is how it should be.

1 thought on “The Shale Revolution is the Real Energiewende”