The facts are the facts and it’s shale, not renewable energy, that’s allowing the U.S. to reduce carbon dioxide emissions while others merely yap about it. 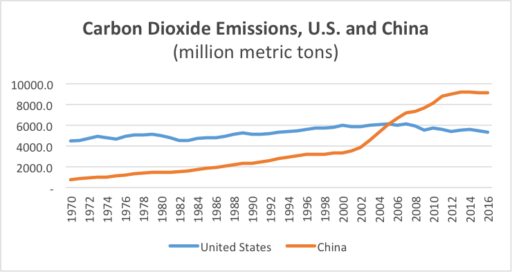 India, the world’s third largest emitter of greenhouse gases, pledged to install more renewable energy and to lower its carbon intensity—the amount of CO2 emitted per unit of gross domestic product. It will do so while allowing total emissions to increase through 2030, similar to China. India’s carbon dioxide emissions are expected to increase 2 percent this year—slower than the 6 percent annual growth seen over the last decade. India still has 240 million citizens without electricity and needs to provide reliable power to them. 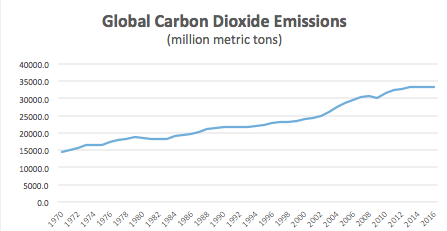 Over the past 10 years, governments and private investors have together spent $2 trillion on infrastructure to produce electricity from wind and solar power. According to Environmental Progress, after adjusting for inflation, that level of investment exceeds the total cost of all nuclear plants built or under construction. In recent years, renewable capacity has outpaced all other sources—including coal, natural gas and nuclear power. Solar and wind capacity installed in 2015 was more than 10 times what the International Energy Agency had forecast a decade before.

However, as seen from the graph above, this investment in wind and solar capacity has not brought about much decarbonization. Integrating renewable energy into the grid requires large investments in electricity transmission—to move power from intermittently windy and sunny places to places where power is consumed. It also requires fossil fuel plants to be ready to operate when there is no wind or sun. These back-up plants operate at levels far below their maximum capacity, increasing their operating costs and making them uneconomic. 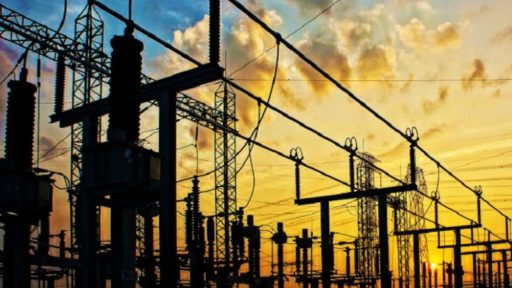 Despite some countries making progress in integrating wind and solar energy into their electricity mix, their carbon dioxide emissions have actually increased. Germany, for example, is now generating 34 percent of its power from non-carbon sources (hydro, nuclear, wind and solar), but its carbon dioxide emissions have increased in the last two years as the country is closing nuclear plants and backing up its intermittent renewables with coal. Germany’s residential electricity prices have skyrocketed to pay for the new renewable capacity and are three times those in the United States.

The United States is ahead of many countries in reducing its carbon dioxide emissions. That result is largely because of increased generation from inexpensive natural gas rather than from constructing wind and solar generators that produce much less energy per unit of capacity.