MDN Editor Jim Willis once again was privileged to attend Shale Insight –THE industry event for the shale industry in the northeast.

This year was the first time the Marcellus Shale Coalition’s Shale Insight conference was held in Pittsburgh. For the first three years of its existence Shale Insight has been held in Philadelphia. Starting this year, the event will rotate between Pittsburgh and Philly every other year. 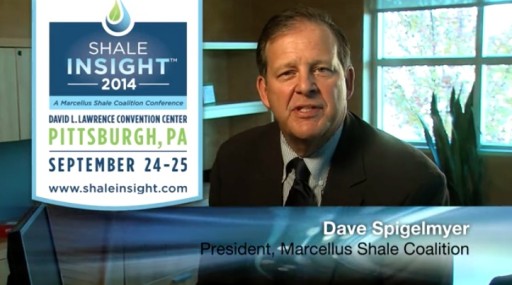 The conference ended on a high note with an address by PA Gov. Tom Corbett–in the re-election fight of his life. Corbett is strongly pro-gas, unlike his opponent Tom Wolf. The conference also ran lots of panels on interesting topics like the environment, Act 13 and its implications, drilling and completions–the list goes on. Jim will share his notes in the coming days. For now, below is a roundup of excellent coverage from others who were there…

Stephen Moore (pictured to right) expended a lot of energy speaking about energy and the economy – and their inextricable link. “You cannot understand economics unless you understand energy,” he said in his opening. “The industry is carrying the rest of the U.S. on its shoulders. Without the energy boom going on, there would be no economic recovery at all.” Moore is a chief economist for the Heritage Foundation, a conservative research think tank from Washington, D.C. And his thoughts made an audience in the hundreds think Tuesday morning, as Shale Insight 2014 kicked off its two-day conference at the David L. Lawrence Convention Center.

The Heritage Foundation’s chief economist Stephen Moore kicked off this year’s Shale Insight conference in Pittsburgh by telling an audience that without advances in the onshore oil and gas industry there would be no economic recovery in the United States. Moore, a one-time staffer for President Reagan and a former member of the Wall Street Journal’s editorial board, returned to the conservative think-tank earlier this year, 25 years after he left it in the 1980s. His speech marked a politically oriented Wednesday morning filled with skepticism about some of President Obama’s economic- and energy-related policies. Moore preceded a moderated discussion with Fox News’ Dana Perino, who served as President George W. Bush’s press secretary for nearly two years.

From Cadiz and Hopedale to Majorsville and Mobley, MarkWest Energy’s investment for Marcellus and Utica shale processing infrastructure now reaches about $7.5 billion, but Frank Semple said development is far from complete. “We are still in the early innings of a nine-inning ball game,” Semple, MarkWest’s chairman, president and CEO, said Thursday during the Shale Insight 2014 conference in downtown Pittsburgh. As Denver-based MarkWest continues expanding throughout the region, Semple said those working for his firm remain determined to do the “little things” to make a good impression with the public. “Make sure your boots are clean when you go into a local restaurant – and always leave a tip,” he said as a guide to workers.

Following Semple’s remarks, former U.S. Department of Energy Secretary Bill Richardson (right) took the podium. The Democrat, who also served as governor of New Mexico, knew he was speaking to a room filled with Republicans, but said he believes support for shale development is bi-partisan. However, conservative talk show host Sean Hannity said he believes Obama and fellow Democrats are preventing the shale industry from reaching its full potential. “Socialism always fails – and it has failed again under President Obama,” Hannity said. “Americans are suffering needlessly because of the stupidity of government. Government is not your friend. In spite of them, you are still succeeding.”

During a half-hour keynote address Thursday during the second day of Shale Insight 2014, the former two-term governor of New Mexico and former U.S. energy secretary in the Clinton administration, praised the industry’s rapid progress, but also suggested that it consider aligning itself with some unlikely partners. “You’re hot right now, you’re good, you’re strong, you’re moving forward,” Richardson told an audience of several hundred industry representatives gathered at the David L. Lawrence Convention Center for the annual event sponsored by Marcellus Shale Coalition. Richardson credited the industry’s work and its use of hydraulic fracturing technology in the Appalachian Basin for driving the production of natural gas and natural gas liquids and making the United States the top oil and gas producer in the world. “You guys are on a roll,” he said.

While discussing the success his company is having, XTO Energy President Randy Cleveland (right) on Wednesday was quick to mention Belmont County as a particularly fruitful venture – one that plays a large role in the region’s energy production. XTO Energy is one of several companies finding large returns in the Utica shale formation underlying Belmont County. “We are increasing our Utica production in Belmont County. We are pleased with the early results,” Cleveland told those attending the Shale Insight 2014 conference at the David L. Lawrence Convention Center in downtown Pittsburgh. “As Marcellus and Utica production grows, so does this region’s role as an energy producer.”

Sound government policy, a commitment to operating responsibility and an investment in people are key to keeping the momentum of the shale gas boom, said XTO Energy President Randy Cleveland during a lunchtime speech Wednesday at the Marcellus Shale Coalition’s Shale Insight conference. Cleveland said that in terms of policy, Pennsylvania needs to have a tax structure that provides adequate resources to the communities in which it operates. XTO, based in Fort Worth, is a unit of Irving-based Exxon Mobil Corp. He also said the industry must collaborate with educational institutions to create more opportunities for young people to receive technical training, given a shortage of people who have expertise in areas such as welding and pipe fitting.

XTO Energy Inc. President Randy Cleveland told a Pittsburgh audience Wednesday that if the Appalachian Basin expects to remain competitive in a rapidly evolving energy market, state policies and regulations will need to adapt. He chided “outdated” regulations in West Virginia and advocated for a fair severance tax, while Ohio lawmakers also consider an increase to their tax (see Shale Daily, May 15). Cleveland went further to say Pennsylvania’s corporate tax structure needs to be overhauled and he said the ExxonMobil Corp. subsidiary supports keeping Pennsylvania’s impact fee, rather than replace or pair it with a higher severance tax.

“Here in Pennsylvania, which struggles with an uncompetitive business tax structure overhaul, we support a system based on predictability, fairness and simplicity,” Cleveland said. “We also support a tax structure that provides adequate resources to the communities in which we operate,” he said of the impact fee, which collects a flat rate from all unconventional wells drilled in the state each year to allocate to host communities.

If there was a single theme threading the final speeches during the Marcellus Shale Coalition’s conference Downtown on Thursday, it was that economy needs energy development. The idea was central to talks given by Fox News pundit Sean Hannity, former Pennsylvania Gov. Tom Ridge and current Gov. Tom Corbett, who closed out the three-day industry conference at the David L. Lawrence Convention Center. Mr. Hannity railed against government bureaucracy and the Obama administration while praising the energy industry for its growth since the shale boom.

Mr. Hannity, who hosts an eponymous cable show on Fox News and a syndicated radio show, said he recently went to North Dakota where oil production from the Bakken Shale has soared. “The unemployment rate in North Dakota is virtually zero because of energy,” he said. “North Dakota is a miracle. It ought to be duplicated. It’s the paradigm that we should be creating across the country.”

Former Secretary of Homeland Security Tom Ridge challenged attendees at the Marcellus Shale Coalition’s Shale Insight conference to consider the security of the country’s energy infrastructure. The world is full of peril, he said, and it has no boundaries. Malicious computer code is increasing in sophistication and complexity, and as the number Internet-enabled devices rise, so, too, do the number of access points. The Internet, he added, was never designed to be a secure communications platform. Real energy security, he said, is being both unreliant on others for this country’s energy needs and keeping the energy infrastructure safe. “The bottom line is this: let’s be equally certain that our energy itself is equally secure,” he said.

As to the question of whether exporting liquefied natural gas is a good idea, the answer is yes, it is, according to participants in a panel discussion at the Marcellus Shale Coalition’s Shale Insight conference. There is a market for LNG in Japan, said Kazuyuki Onose, senior vice president at Sumitomo Corp. of Americas. He said the Fukushima nuclear disaster has forced the country to rely more heavily on natural gas, which it already is exporting at high prices. And also, it would end a gas pricing system linked to crude oil prices. Exporting would create jobs domestically and boost tax revenues, said Bruce McKay, managing director for federal affairs at Dominion. He said the company is preparing to convert its Cove Point import facility in Maryland into an export facility, and the company expects that Federal Energy Regulatory Commission approval will come within days.