New Brunswick needs shale gas development. Its experience, and Alberta’s, show it’s safe, despite those few loud voices who would squelch the opportunity.

The Government of the Province of New Brunswick, in 2009, granted Natural Gas (Shale Gas in NB) Exploration Permits to three companies, Corridor Resources Inc., Contact Exploration and SWN Resources Canada Ltd to explore a major portion of the Province for shale gas reserves. SWN was given the biggest acreage, somewhere in the vicinity of 3 million acres.

SWN conducted exploration in 2010 with both airborne equipment and seismic testing on the ground. A group of protesters got together and led by an American citizen, Mr. James Emberger, blocked roads, damaged equipment and hijacked meetings in which SWN was trying to explain to the citizens of NB what shale gas extraction assisted by hydraulic fracturing was all about.

Many of the NB citizens objected to that form of protesting and groups were quickly formed to support the industry. We did a lot of research, to convince ourselves of the viable and safe extraction of shale gas from our Province. We are thoroughly satisfied that the industry can be developed in a safe and environmentally friendly fashion, and have chosen not to believe the half-truths and outright lies of the anti-movement. 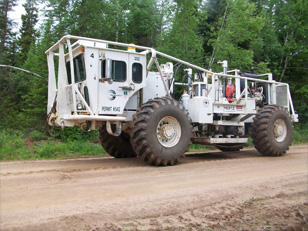 The protest here was fueled by the debunked movie Gasland and the phony video of water burning taps. In fact, the protesters still preach the idioms from those sources, even though they have been publicly ridiculed. The followers have chosen to believe every word from Emberger and his gang and will not reason or listen to scientific evidence that has been peer reviewed.

They swallow the lies spread about Dimock and other horror stories invented in Pennsylvania and other areas in the US and refuse to accept that NB has a 15 year history of drilling and fracturing gas wells, without one incident of damaged wells or other pollution that the protesters claim.

Our province of Alberta, where thousands of our NB workers have gone to work, is the oil/gas producing capital of Canada, followed closely now by Saskatchewan, British Columbia and Newfoundland. No water wells have been polluted, claims against the companies bred by greed have been thrown out of court, and no appreciable pollution is occurring.

For that reason, the majority of NB residents support the natural gas industry, in spite of claims to the contrary by Emberger and company. He claims he represents a Coalition of Shale Gas Opponents made up of 30 groups. Many of these groups are very small, and a number of them list the same names as members. Our guess is that the real number lies somewhere between 2 and 300 followers, about 0.0001% of our population.

The Government of New Brunswick has stated both publicly, and to the Legislature In Session, that shale gas exploration will continue in NB and when sufficient reserves are identified to sustain production it will go ahead too.

(Incidentally, if the USA would be so kind as to recall its citizen Mr James Emberger back to the USA, New Brunswick residents would be forever grateful!!)

7 thoughts on “Shale Gas Development A Must for New Brunswick”