Several states that have severance taxes on fossil fuel extraction are forced to re-evaluate their budgets because of revenue shortfalls due to low production and prices.

There may be a new date on the calendar, but some things still haven’t changed regarding the push for the institution of a severance tax in Pennsylvania. We’ve covered this topic before, including the estimated $855 million in contributions from the current impact fee. The Pennsylvania State Association of Township Supervisors recently highlighted some of the uses of this funding in their newsletter.

Yet some continue to call for the institution of a tax to fund education or otherwise help close gaps in the yet-to-be-passed state budget. Many of the same folks point to the states with an established Severance Tax like Texas, Oklahoma, West Virginia, Alaska and North Dakota as the model of what should be.

But according to a report by the U.S. Energy Information Administration published on January 12, these very same states which are held as an ideal model by some are seeing reductions in taxes due to the falling prices of oil, gas and coal. You can read the details and the measures these states are implementing in order to maintain a workable budget below. It’s also worth noting that many of these states also collect revenue from the coal industry, which would not be the case if implemented here in Pennsylvania. 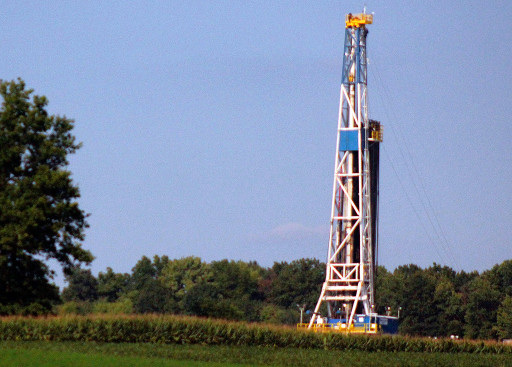 While the impact fee revenues are also down in Pennsylvania due to decreased production, there are three distinct advantages this model retains over a severance tax model.

One can only hope our legislators look at this information as a warning against using a severance tax based on only one industry to prop up a hemorrhaging state budget. 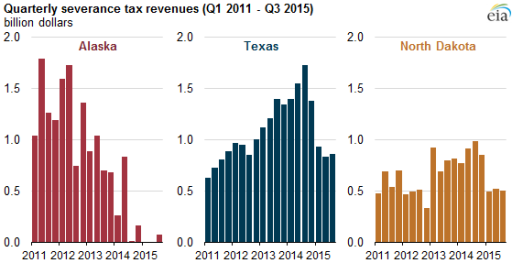 Several states that collect significant revenue from severance taxes on fossil fuel extraction are re-evaluating current and upcoming operating budgets and taxation structures to address revenue shortfalls. Severance taxes are often imposed on the extraction of nonrenewable resources such as crude oil, natural gas, and coal. Lower fossil fuel prices, and in some cases, lower production, have led to lower severance tax receipts than were expected when revenue estimates were developed.

Alaska. Alaska’s severance tax revenue has fallen further and faster than other states because its tax is based on the operators’ net income rather than on the value or volume of oil extracted. In 2015, when average net incomes after operating and capital expenses were near zero, the state derived practically no revenue from this tax, versus more than $5 billion in 2012. Based on 2014 data, severance taxes accounted for about 72% of the state’s tax revenue. Given the sharp decline in severance tax revenues, the governor recently proposed a 6% state income tax as well as scaling back the payout of dividends to residents from Alaska’s Permanent Fund.

Texas. The comptroller of Texas reports that as of November 2015, revenues from natural gas production and oil production and regulation were down 48% and 51%, respectively, from a year ago. Texas’s economy is more diversified than that of other major oil-producing states, and severance taxes account for a lower percent of its tax total receipts (11% in 2014), meaning Texas can likely respond to the lower severance tax receipts without drastic changes to its enacted 2016 budget.

North Dakota. Despite oil production volumes remaining largely flat throughout 2015, total severance tax revenues fell from more than $3.5 billion in 2014 to $2 billion in 2015 as oil prices declined. The state’s general fund budget collections from July through November 2015, the first five months of the 2015-17 two-year budgeting period, were $152 million, which was 8.9% below the budgetary forecast. The below-budget revenue was attributed to weaker sales tax collections, which are in part driven by oil exploration and production in the Bakken region. If projected revenue remains 97.5% or less of the budgeted amount, across-the-board spending reductions would be imposed for most state agencies. 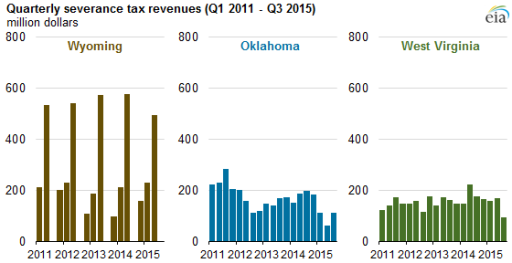 Department of Commerce, U.S. Census Bureau, Quarterly Summary of State and Local Taxes. Note: In Wyoming, revenue collections for the production year are due in February, and third quarter payments are not required.

Wyoming. Mineral severance taxes from oil, natural gas, and coal production, along with associated federal mineral royalties, are the primary revenue sources for Wyoming. Severance taxes alone accounted for 39% of the state’s receipts in 2014. However, despite recent increases in oil production, Wyoming is seeing lower revenue projections in response to lower oil prices and declining natural gas and coal production. In October 2015, the state revised its 2015-18 severance tax projections downward by nearly $160 million from January 2015 projections.

Oklahoma. Although severance taxes accounted for 8% of Oklahoma’s revenue collections in 2014, collections from state sales taxes and individual and corporate income taxes are also significantly affected by oil and natural gas prices. The state faces a fiscal year 2017 budget deficit of $900 million on a general fund budget of nearly $7 billion. In December 2015 the state declared a revenue failure, which requires state agencies to reduce spending, and allows for use up to 37.5% of the state’s budget stabilization fund.