Many fractivists believe they can ethically use natural gas while opposing fracking, believing their gas doesn’t come from it. They’re sadly misinformed.

A loyal reader e-mailed me recently regarding some arguments he’s been hearing from fractivists in his college town. The thrust of their argument is that there’s no hypocrisy in fighting fracking and still using natural gas to cook and eat. This is because the process, in their shallow minds, is a very recent development and that even now, despite the widespread of use of hydraulic fracturing, there is plenty of natural gas still produced by traditional extraction methods. We’ve had commenters here who suggested the same thing.

They wrongly believe, too, the bulk of the gas used the Northeast utilities, is not gas produced by hydraulic fracturing. Therefore, these fractivists feel free to use natural gas and simultaneously oppose fracking without the slightest pangs of guilt, worries of ethical consistency or fear of hypocrisy. It’s an act of total self-deception.

The reality is that almost every molecule of methane in our Northeast homes comes from hydraulically fractured Marcellus wells because that’s how the pipeline system works – even if you buy gas from a Gulf Coast producer; you will get your gas molecules from a more local source.

Why? Well, there are multiple reasons, starting with the fact the pipelines that used to bring gas north are now, in many cases, reversing flow or going bi-directional and sending gas south, east and west.

Also, gas is, by nature, pooled as it is moved around, stored and redistributed. The gas that reaches any particular location, therefore, is a mix gas coming from multiple locations. The Stagecoach Natural Gas Storage Facility in Owego, New York, for example, handles gas supplied by the Tennessee Gas Pipeline, the Transco Pipeline  and the Millennium Pipeline, all of which collect and distribute gas from and to different markets. The gas gets pumped into the storage facility and pulled out as required, at which point it is just gas, not gas from one region or the other and certainly not fracked or conventional gas.

Finally, natural gas providers often trade it using “park and loan” options, which, once again, means the gas a consumer most likely receives is simply the gas closest to the source: Marcellus or Utica gas if you live in the Northeast. Take a look at these two “before and after Marcellus” charts prepared for a presentation entitled “The Economic Impact of Investment in Gas Infrastructure in the Marcellus Shale Region” that was delivered at the International Transportation & Economic Development Conference earlier this year: 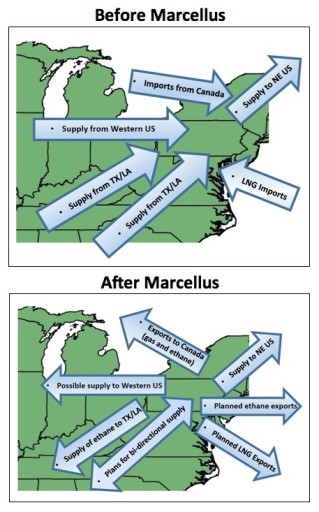 The sheer volume of that Marcellus gas ensures the bulk of the molecules natural gas reaching cities anywhere in the Mid-Atlantic, New York or New England comes from this play. Indeed, the Energy Information Administration in its 2014 Annual Energy Outlook notes the following:

Marcellus natural gas exceeds 100% of the demand projected for the New England and Mid-Atlantic Census Divisions from 2016 through 2040 in the Reference case, requiring transportation of some Marcellus gas to other markets. During the expected peak production period for the Marcellus shale, from 2022 through 2025, its total production exceeds natural gas consumption in the New England and Middle Atlantic regions by more than 1.0 Tcf over the period.

And, nationwide, most gas produced is from shale, tight sands, coalbed methane (all of which get hydraulically fractured) or is associated gas from an oil well, likely produced the same way. The only significant gas we produce which doesn’t require hydraulic fracturing is from the offshore Gulf (which seldom gets to the Northeast now that we send Marcellus gas their way) or from Alaska, which isn’t even connected to the pipeline network in the lower 48 states.

Would it make any difference if fractivists knew no hydraulic fracturing would actually mean no natural gas either (as well as higher gasoline prices due to less oil production)? Not a chance, but it’s nice to think it might, isn’t it? For those who aren’t engaged in endless self-deception…well, that’s a different story. And, that’s the point of this post.

8 thoughts on “Self-Deception by Fractivists Knows No Bounds”