Yesterday was another day in court for Vera Scoggins, the fractivist tormenting local landowners and it was a day of strange revelations and stranger questions.

Vera Scroggins was in Susquehanna County court yesterday for hearings on three motions, two brought by Cabot Oil & Gas and another brought by her attorneys. It was a an eye-opening day and more for the questions it raised than the answers provided by the court. Susquehanna County Judge Kenneth Seamans found her in violation of the preliminary injunction he had previously issued and reserved decision on the other two motions. It was, though, what we learned in the debate over those second two motions, which came later in the day, that produced some startling revelations and even bigger questions.

The big story was one of those enigmas wrapped in a riddle, in fact. We learned, for example, that three of Vera Scroggins attorneys (she is represented by the American Civil Liberties Union or ACLU and a group known as Public Citizen) have requested to withdraw their appearances as her attorneys. The implications of that fact raise a pretty fundamental question; namely, what in the world did Vera Scroggins do that was enough to get the ACLU to want out? These are after all, the people who represent communists, the Ku Klux Klan, neo-Nazis and every other offensive group imaginable. Offending them is next to impossible. Yet, Vera Scroggins managed to do it. 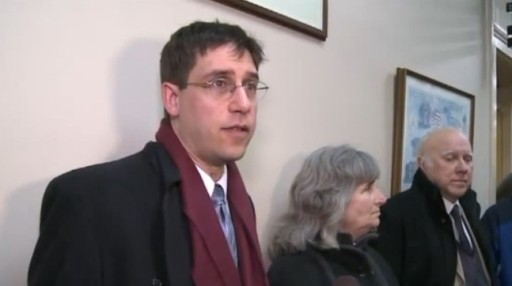 Vera Scroggins and Two of Her Attorneys

It was unclear from the testimony exactly what it took for Vera to turn the ACLU against her, but we did get clues. Letting her attorneys negotiate a settlement and then reneging appears to have given her a head start. We learned, for example, the Scroggins and Cabot legal teams had come to a settlement agreement last month, but Vera scotched the whole thing by refusing to sign. That alone might be enough to offend most attorneys and cause them to withdraw, but we’re talking the ACLU here, so it would seem to take more.

The testimony didn’t get into the details but there were tantalizing hints as to what that more might be. It came during a very odd moment of the sort you almost never see in a courtroom, unless it’s a scene from some drama production like Inherit the Wind, when Clarence Darrow put opposing counsel William Jennings Bryan on the stand.  The Cabot team called two members of the Scroggins team as witnesses in their case. The debate was over a Cabot motion to enforce the settlement agreed to among the attorneys for both sides.

During the debate, Cabot’s attorneys offered some impressive case law to support their position that reneging wasn’t permitted and the judge reserved decision on whether or not to actually enforce the verbal agreement. Testimony leading up to that point, though, turned to questioning about what exactly derailed the settlement and it was during that discussion that the issue of returning personal photos suddenly arose.

It appears the Cabot attorneys, prior to the hearings, had, as is normal, subjected Scroggins to interrogatory requests for information. In the course of complying with those demands, she apparently inadvertently (supposedly) shared personal photos, financial information and private journals. How this was even possible is difficult to explain given all the material first went through her attorneys to ascertain relevance before being passed on to the Cabot lawyers. One suspects they had already tired of her and weren’t paying attention. She has a habit of wearing out friends, after all.

Regardless, the material obviously must have gotten to Cabot’s attorneys. The testimony by the Scroggins attorneys, who apparently continue to represent her under court order, described the material as “accidental” and “sensitive.” They were exceedingly cautious in their answers to questions, as one might expect, and did all they could to avoid answering by asking repeatedly for repeats, one even resorting to a “I’m having trouble with truth in this context” explanation when asked if e-mails he had written were truthful. He kept protesting he wasn’t being evasive, but ending up answering that one by saying “I believed what I wrote.”

There was a lot of that sort of parsing of words yesterday, but when Cabot attorneys asked this Scroggins attorney if there had been a “hiccup” in getting her signature on the settlement agreement, he admitted there had been one. Upon further questioning as to whether the “hiccup” revolved around the an issue of returning personal photos, it came out that Scroggins apparently wanted Cabot to either return the photos or agree not to refer them to criminal authorities.

Some of that testimony was subsequently struck from the record for lack of relevance to the matter at hand but the line of questioning and the answers delivered in open court suggest something bad. Scroggins clearly wants to ensure it doesn’t see the light of day. One can only speculate as to what that might be and we won’t do it here, but readers familiar with Scroggins various associations and social media trail will have lots of questions. One hopes investigative reporters will as well.

We noticed a discernible decline in the volume of school girl giggling from the rogue’s gallery of Scroggins supporters in the audience during this portion of the hearings. Even they apparently recognized this was a more serious matter than the detailed arguments earlier over whether or not she had violated a preliminary injunction barring her from Cabot well pads and access roads.

They had been squealing and giggling every time Vera and her angry ally, Matt Ryan, smirkily introduced some line into their testimony about supposed contamination when the question had nothing to do it with it. The sheer childishness of it all was revealing. It reminded me of the kid in the souped up chevy trying to get attention by squealing out his tires on Main Street. That was the tenor of the fractivists present.

And, what a rogues gallery it was. Former Binghamton Mayor Matt Ryan, now living in Ithaca in a natural gas heated home in Ithaca was there and showed off a bit of his hair-trigger anger when questioned, totally captivated by his own brilliance. There was also: Alex Lotorto, the serial protestor; Isaac Silberman-Gorn, the paid protestor; a man dressed in Arabian attire; another man adorned in some maharishi outfit, the gigglers from Allentown; Bradford County fractivist Bill Ferullo; Bill Huston, with camera in hand; a forlorn protester from Connecticut; and Craig Stevens, the motormouth trial lawyer hack.

There were about 50 people there altogether, including perhaps a 15-20 fractivist types, court officers, reporters, witnesses, lawyers, gas supporters and the like. I noticed exactly one person there who actually spoke for the landowners of Susquehanna County and she told me “If these people ever knew what this woman [Scroggins] was really like and how she has tormented our lives…” Unfortunately, that individual didn’t get to testify or speak to the cameras, which is the problem, of course. Vera Scroggins knows how to capture attention. That’s what she’s all about.

Scroggins got away without being penalized for her violation of the injunction in this instance (she had entered into a Cabot access road on one of her tours) but a violation it was the judge declared. He also effectively further restricted her by clarifying what an access road was and making it explicitly clear she was not to ignore plainly worded signs in clear view labeling it as such.

That, of course, gave some benefit of the doubt to her and there’s little doubt from the snarky nature of her testimony that she deserved none of it. She made one ludicrous claim after another about not being able to read signs at 50 feet but, nonetheless, being able to read them at 200-300 feet. She, too, resorted to weasel wording to explain the unexplainable, saying at one point she didn’t read the clear no trespass warnings, relying upon her “automatic view” instead.

She tried to conveniently forget her own earlier testimony calling the road on which she trespassed an access road.  She even argued at another point that a sign identifying an access road entrance only referred to an entrance to the access road and not the access road itself, using a Clintonian “It means to me..” excuse, combined with the ever-present smirk.

It’s All About Vera, As It Always Is

She didn’t get away with it, of course, but she didn’t get penalized either, much to the chagrin of our Susquehanna County landowner who has had to put up with this nonsense.  One can’t fault the judge. He’s obviously looking at the bigger picture and in that bigger picture the credibility of Scroggins is evaporating faster than the water in a boiling teapot.

Still, although Scroggins repeatedly told the court yesterday it was her intention to always comply with the preliminary injunction, that wasn’t what she told WNEP back in March regarding the first injunction:

“If I have to go to jail to protect my planet and my life, and to expose this industry, then yes.”

It’s funny how attitudes change inside the courtroom, isn’t it? Six months ago she was ready to defy the court and the world to protect “the planet.” Yesterday, it was all about her, saving herself and what she “honestly believed.” So goes the fractivist down the road of self-deceit. She’s deceiving fewer and fewer others every day, though, and that’s what’s important. Even her lawyers want out as she scrambles to keep something apparently bad well hidden.