Two students were each awarded a scholarship plus a Certificate of Achievement by PA Rep. Jonathan Fritz on June 26; UDRBC and Enviroventures funded them.

The Upper Delaware River Basin Citizens Scholarship Committee was pleased to announce the recipient of the 2020 UDRBC Agricultural Scholarship.  Honesdale High School senior Rachel Olver, daughter of Mark and Tammy Olver of Beach Lake, was awarded the $1,000 scholarship in recognition of her continued commitment toward the preservation of farming for future generations in Wayne County.  Rachel will be furthering her education in the field of agriculture while recognizing the importance of natural gas development with regard to farming. 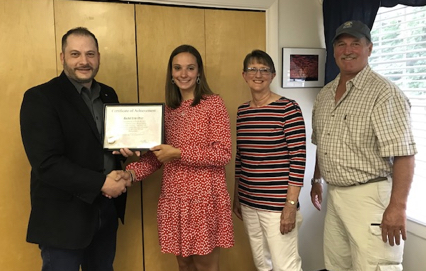 The mission statement of the UDRBC is:  Revering our heritage, we, the Upper Delaware River Basin Citizens, in an effort to provide current and future generations the ability to live and work in this region, are focused on maintaining individual property rights while promoting responsible stewardship and economic development of all resources in the Upper Delaware Basin.

As part of the application for the scholarship, students were asked to write an essay on why Natural Gas Exploration and Development (NGED) is so important to agriculture and the preservation of family farming within the Upper Delaware River Basin.  The following is Rachel’s essay:

Inheriting a family farm is no longer considered a blessing, but more of a burden in today’s world.  Financially, farms are unable to sustain themselves, causing more people to sell them off, rather than to be the next generation to farm the land which they inherited.  Natural Gas Exploration and Development would help prevent this from occurring in our community.  This is crucial to agriculture and preserving family farms in the Upper Delaware River Basin.  Many farmers are financially struggling in today’s society, and seizing an opportunity like taking in the revenue would benefit them.  Having farmers receive the income from NGED would allow farmers to continue to raise their livestock and grow their crops without worrying if bills will get paid that month.  This would allow many farmers to continue their way of life, and not have to decide to sell off their farm because they can no longer afford it.  The traditions of farming will not continue to be passed down through generations if more and more local farms are forced to sell out.

In other parts of Pennsylvania, it has been proven that the income from Natural Gas Exploration and Development has dramatically affected farmers in a positive way.  If it is helping other local communities, why can the Upper Delaware River Basin take advantage of these as well?  There is a strong relationship between the agriculture industry and the Natural Gas industry, and they coexist well with one another.  Many farmers are able to continue and even expand their business, due to the revenue brought in by NGED.  The tremendous financial support would be vital to help the farmers and agriculture as a whole in the Upper Delaware River Basin.

A second scholarship was given by Enviroventures and presented by its president, Ned Lang.  EnviroVentures is committed to a greener environment by taking what was yesterday’s waste and turning it into usable fertilizer, thus, assisting small farms throughout Wayne County to become economically viable farms. 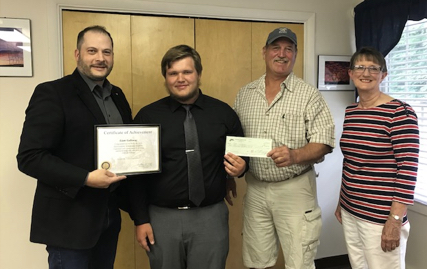 This scholarship is given to an individual who is like-minded in this endeavor.   This $1,000 scholarship was awarded to Liam Galloway, son of Thomas and Rachelle Galloway of Equinunk, PA, in recognition of his continued commitment toward the preservation of farming for future generations in Wayne County.  The same essay question was asked of these applicants.  The following was Liam’s response:

We’ve all heard the saying “there is no place like home.”  In the famous story of The Wizard of Oz, Dorothy Gale attempts to get home from an unfamiliar place.  This is a common circumstance among graduate students and other high school graduates who leave their hometown in search of the American dream; life, liberty, and the pursuit of happiness.  This situation seems to be common in my small farming community.  Young people are forced to leave their family farms in order to provide for themselves.  Many of these people (myself included) would opt to remain close to their families and remain on their farms if there were economic opportunities in the area that would allow them to do so.

Natural gas exploration and development in the Upper Delaware River Basin area has been the light at the end of the tunnel for those of us who dream of remaining on our family farms.  NGED provides opportunities in the following areas which include: economic, environmental, and family structure.

According to the article ‘The Benefits of Natural Gas in the Agriculture Industry’ put out by Shipley Energy, “One of the greatest benefits of natural gas for farming is the affordability.”  Natural gas is more affordable than other fuels for farmers.  Fuels such as diesel, gas, and propane cost more to purchase and use and add to the overall cost of farming in general.  These fuels cost more than just dollars and cents, they are also costly on the environment scale.

According to Shipley Energy natural gas farm fuel “is friendlier to the environment than competing fuel types.  Compared to petroleum, natural gas emits thirty percent less carbon dioxide.”  With climate change being at the forefront of the minds of farmers and other people alike, natural gas is the common sense alternative to other problematic fuel sources.  When farms and other small businesses begin to use natural gas, it serves to benefit not only economically and ecologically, but also indirectly positively affects family structure.

If natural gas was allowed to be developed in our own backyards, and on our own lands, more young people would be able to remain on farms that have been in their families for generations.  Young people that were born here could live, work, and thrive here and raise families on the lands of their fathers, grandfathers and great grandfathers before them.  Families could remain closer, communities would be stronger and safer if only we were allowed to utilize one of our local natural resources-natural gas.

Natural Gas Exploration and Development has the potential to provide a setting for economic growth, improvements in quality of the environment and provides opportunities for families and communities alike to remain strong.  In order to achieve the American dream, one must have a place to refer to as “no place like home.”

Congratulations to both Rachel and Liam!  May they have continued success in their pursuit of careers in agriculture and the preservation of family farms in Wayne County.

To learn more about the UDRBC and its mission or to become a member, go to udrbc.org.