Like ticks on a deer, fractivists are all over a speech by Steve Schlotterbeck, former CEO of EQT, saying “Told You So” but the details say otherwise.

Everywhere you looked in fractivist circles yesterday, there were hoots and hollers about a speech given by former EQT executive Steve Schlotterbeck at a Northeast Petrochemical Conference in Pittsburgh. Schlotterbeck made a deliberately provocative speech to a shale gas industry he clearly loves to offer his views on how to deal with the problem of low prices brought on by overproduction. I like speeches that force you to think and Schlotterbeck performed a valuable service. Unsurprisingly, fractivists only heard what they wanted to hear.

Two people I trust a lot were there for the speech; our buddy Jim Willis from the invaluable Marcellus Drilling News and Charlie Schliebs, Managing Director of Stone Pier Capital Advisors. Schlotterbeck is also a Special Partner-Energy at Stone Pier. Jim offered the following observations, among others:

We read on a regular basis in mainstream media that shale companies spend more money than they bring in, and that investors are growing tired of pumping money into companies without a return on their investment.

Steve echoed that theme in his talk. In fact, he was quite blunt in his assessment that the shale industry is sewing the seeds of its own destruction by overproducing and not making money. He said the industry doesn’t seem to realize that it’s killing itself.

As he spoke about “shareholder value destruction,” Steve put the following slide up on the screen (Steve’s full presentation is embedded below): 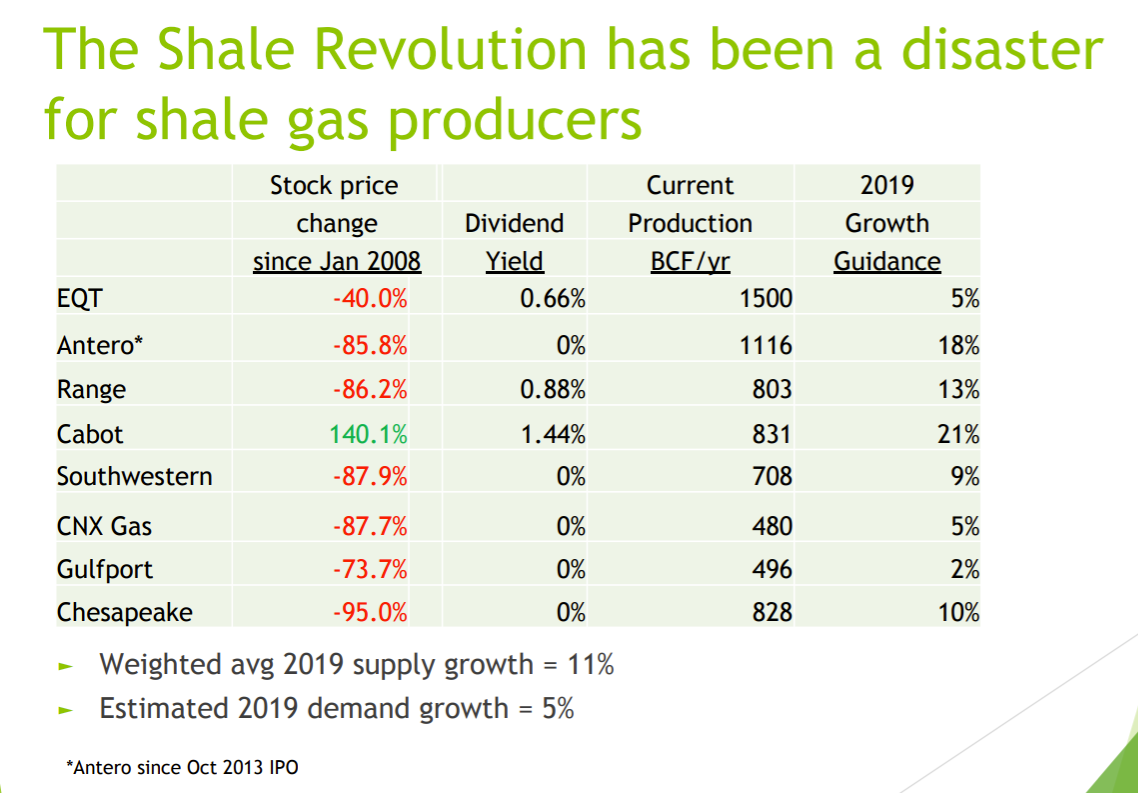 It’s rather shocking, in several respects. As you can see, for investors who “buy and hold” a stock, if you were to buy and hold EQT from 2008 to the present, your stock would be worth 40% less today than when you bought it. Most of the other major M-U producers have seen shareholder value decrease nearly 90%! And Chesapeake Energy’s shareholder value destruction is 95%!! It’s not pretty.

The only standout in the bunch is Cabot Oil & Gas–a true unicorn among all producers. Somehow Cabot keeps making money and increasing shareholder value.

Steve said drillers can “right the ship” of shareholder value destruction by doing the following:

He added that a rebalancing of gas supply and demand is necessary for gas producers to even survive. Strong language!

That’s a hard dose of reality, but there’s much more. Charlie offers the following:

Steve’s presentation on Friday at the NE Petrochemical Conference has created quite a stir with his hard hitting presentation on the upstream unconventional gas industry, its lack of profitability and the destruction of shareholder value. While he tied it to the potential effects in the petrochemical space…most of the attention has been on the upstream side. Sadly, about half of that attention has been attempts to use Steve’s presentation to bolster anti-industry sentiments. Nothing could be further from Steve’s view.

Until Friday, no one until Steve pulled it all together and drew the precise conclusions and recommendations as Steve has done.

If you read the script and the PowerPoint, in addition to being impressed with Steve’s analysis, you will see that it is very pro-natural gas. However, since the presentation criticized (justifiably) the way the frack-focused segment of the natural gas industry has gone about its business from a shareholder value perspective, a number of news media outlets have tried to link that criticism to their own bias against fossil fuels, natural gas, petrochemicals, plastics, etc., of course without noting Steve’s emphasis on things like praise for the industry’s CO2 reductions, or Steve’s belief that the industry can certainly fix the financial mess into which it has gotten itself.

Negative, anti-industry articles have come from places such as DeSmog and RT, the Russian news outlet…

Just to be clear, Steve is emphatically pro-upstream natural gas industry and its mid and downstream cousins!

If you were not at the Petrochemical Conference, and you are in or have any interest in the up, mid or downstream industries as they affect either our region or the nation, I would respectfully suggest that you take time to read both the script and PowerPoint (best when done side by side), as you will then have a very effective update on the current state of the industry (leaving out the much different supermajors/ultramajors, which can, for example, much more easily let shale gas fields take a break while focusing on other assets in the portfolio).

Charlie makes a great point at the end and it takes me back to a meeting in Wyoming County, New York, several years when I was working on some agricultural issues. The local Soil & Water Conservation District rep was there and made one of the most poignant observations I’ve ever heard about agriculture or any other commodity business:

“To survive as a farmer, you need to get big, get weird or get out.”

She was correct. Farming, generally speaking, is a commodity business where someone else always sets the price. The market is mostly controlled by buyers, not sellers. I grew up on a dairy farm where that point was made every month at milk check time as my Dad nervously waited to see if there’d be enough money to pay the bills, having no idea what he would receive.

Dairy farmers, to survive, also had to keep lowering costs to even stay in the business because someone else was doing it by getting bigger and spreading their overhead. They were forever being told they had to produce less to get higher prices, but that was impossible. They had to get bigger themselves to generate more income from their assets, get weird by specializing in organic milk or some some such thing where sellers had more influence price or they had to get out. No amount of preaching and no amount of programs ever had the slightest impact in reducing production; it might theoretically work at the macroeconomic level, but never at the microeconomic level.

This is the problem faced by the shale gas industry today. It’s no different. Shale gas companies will have to get big to compete with the majors, get weird in the sense of creating niche markets close to home or go out of business. It’s the natural progression in any commodity business, but some companies will survive and take over the industry. The Industry itself will continue to grow and do great things as companies come and companies go. They’re simply vehicles. And, let’s not dismiss the success of Cabot Oil & Gas as an oddity. It happens to be the fourth largest shale gas producer, has continually lowered its costs and developed new markets on its doorstep. It has pointed the way.

This takes us to a key part of the Schlotterbeck presentation, summed up in this slide: 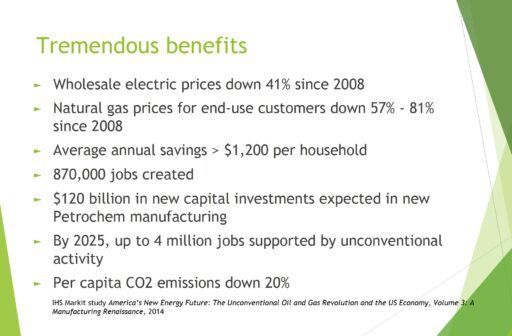 Yes, while the competition and roller-coaster economics of the shale gas commodity business are no prettier than those of dairying (where 10,000 cows farms in sunny California have made it next to impossible for the cold Northeast to compete), the benefits to society are so huge as to almost be unimaginable. Consumers are getting the biggest returns. And, some companies are thriving, even small ones who’ve learned to adapt by specializing and developing their own markets.

That’s the real story here. Schlotterbeck offered a lot of good advice on what companies should do for their balance sheets. It’s all fully consistent with these observations. And, production may well ease as a whole as a result of some going out of business. As they say, the solution to low prices is low prices. It’s harsh world out there in commodity land but it works, for all of us.